KEF supports moves to make cycling and walking in Kingston pleasanter and safer, which will help to make our roads less congested, our residents fitter, and our air cleaner. In recent years this has mainly been in our responses to the Council's "mini-Holland" (now "go cycle") proposals: KEF members Kingston Cycling Campaign and Kingston Biodiversity Network, as well as local residents and media, keep us informed on the issues. KEF concerns and actions follow, the most recent at the top. Some older interventions are filed in About KEF.

There are also some useful links at the bottom of this page.

Kingston Environment Forum broadly supports the proposed route and welcomes its extension towards the Market Place and the fact that it is segregated and 2-way, as this is much needed if more cycling is to be encouraged.

However, we are concerned about the fragmented development of the cycle-routes, and look forward in this case to its extension into the Market Place, with very clear signage that this is a shared space, and beyond to link up with other cycle routes towards north Kingston and New Malden.

Kingston Environment Forum broadly supports the proposals and welcomes the improvements that have been made since the last consultation on this route, which seem to address some of our earlier concerns about the impacts on biodiversity in the area. While appreciating that the route will need to be lit, we trust that it will not be over-lit and that the lighting will be carefully chosen with wildlife in mind. Sustrans has produced some useful advice about lighting ( see https://www.sustrans.org.uk/sites/default/files/images/files/migrated-pdfs/Technical%20Note%2029%20-%20Lighting%20of%20Cycle%20Paths.pdf), as have some bat and wildlife charities.

We believe that the route will prove a very useful short-cut and link, which will encourage more walking and cycling by being well away from traffic and thus contribute to less congestion on local roads, better public health and cleaner air. As it will be a shared route, we hope that it will include very clear signage to that effect. We also hope that it will very soon join up with other proposed cycle routes in Kingston to provide an effective and continuous network of safe routes.

KEF response to the consultation on Heathrow expansion, May 2017, objecting to expansion largely on air quality and sustainability grounds.

KEF welcomes the opening of the Portsmouth Road section of the Go Cycle scheme - see www.kingston.gov.uk/info/200382/go_programme/1266/portsmouth_road/4 for news about the official opening day, and https://www.kingston.gov.uk/gocycle for more information about the scheme and RBK consultations on cycling provision.

September 2016
Yet another letter defending cyclists from unfair criticism, published in the Surrey Comet, 2/9/16:

In response to the letter last week (“Tax Cyclists”) I’d like to point out that cyclists, just like most other people, pay the taxes - income tax and council tax -  that pay for roads, and many pay road tax too as they are drivers as well as cyclists. I’d also like to point out that when people cycle they take up less road and parking space than cars, cause far fewer serious or fatal accidents, and create no air pollution. It’s a form of rough justice that people in cars suffer more of the pollution created by emissions from cars than do cyclists and pedestrians.

Our Chair responded to four consultations on four sections of the mini-Holland / Go Cycle scheme, with comments based on KEF's earlier discussions on the topic. 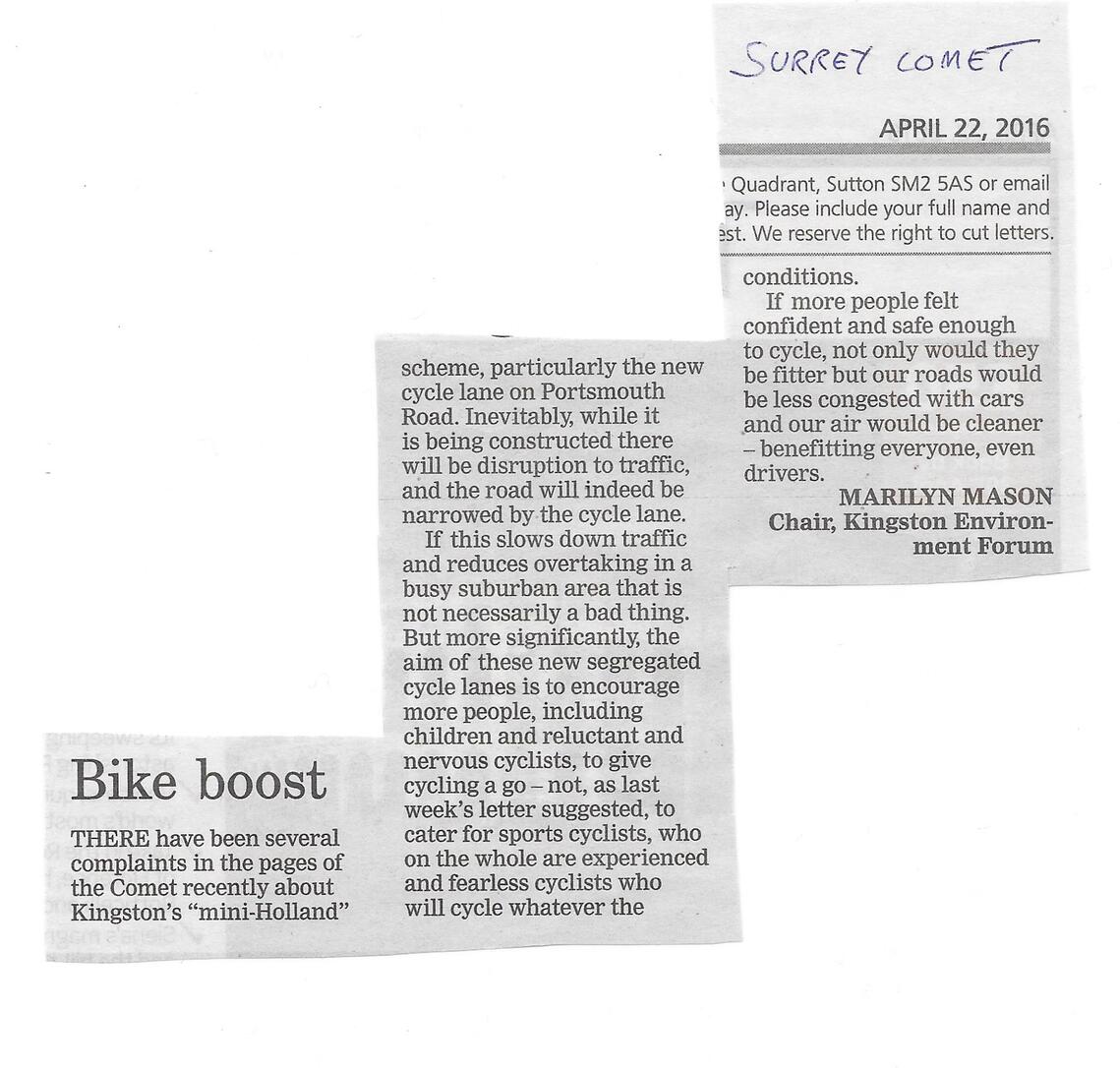 We have continued to support the concept of the mini-Holland (see letter above in Surrey Comet, April 2016, also published in the Kingston Guardian) while being concerned about the slow rate of implementation and the lack of continuity. We have attended and commented on a display on the Portsmouth Road section, and participated in a consultation and workshop on bicycle parking in Kingston.

August 2015, Phase 2 of mini-Holland - we are currently drafting our response to the New Malden-Raynes Park link in readiness for the next consultation. We believe that a compromise is possible between the need for a good cycle link in this area and concerns about loss of biodiversity and that residents' opposition to the cycle-path can be addressed. See also News. 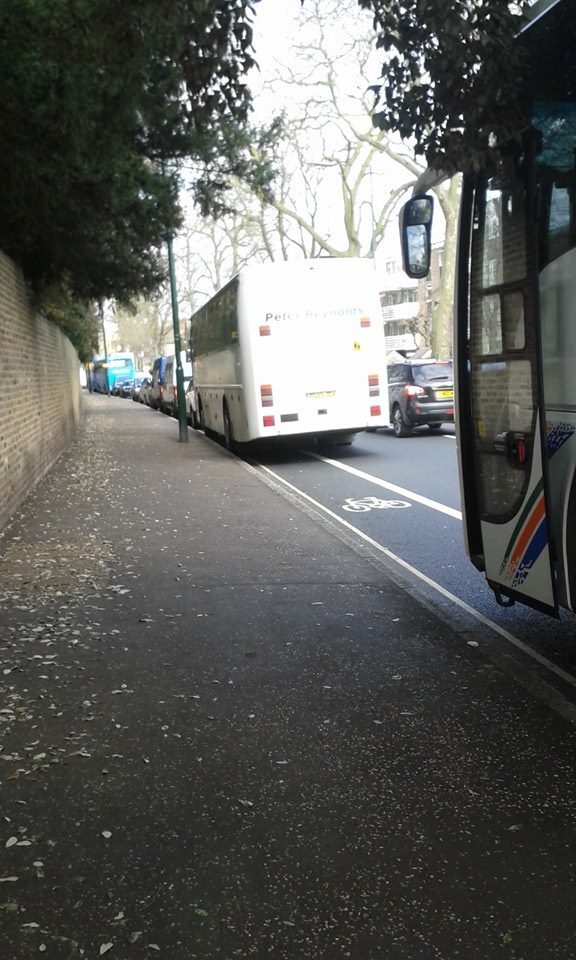 The kind of cycle path we don't need (on Kew Road)

KEF on mini-Holland Portsmouth Road proposals, February 2015
We submitted an on-line response to the consultation, but some of the questions were not suited to responding as a group, and others did not have space to explain or elaborate on our comments, so we sent this as well.

Support for scheme as a whole? Moderate support, as the cycle path needs to be properly segregated all the way along to make all cyclists, however inexperienced or nervous, feel safe. Generally the scheme is disappointingly unambitious and seems to be a very watered-down version of the original proposals.

Likelihood of using the route more for walking or cycling? As proposed, this route seems unlikely to make much difference to experienced cyclists or to walkers, or to encourage children, ex-cyclists and novices to take up cycling.

Agreement with particular sections of the improvements? We like the fully segregated sections, though they should be in both directions. Armadillos and white lines are unlikely to encourage new cyclists or to keep cars, lorries etc out of cycle lanes. We think more space could be taken from the pavements to create segregated cycle lanes in both directions, as Portsmouth Road pavements are little used or unnecessary on the river side of the road where pedestrians can, and would probably prefer to, walk closer to the river along Queens Promenade.

We think the segregated cycle route should not stop at Brighton Road but should continue to the Kingston boundary, so that it could cater for Kingston University students and perhaps encourage Elmbridge Council to follow Kingston's example.

New access and zebra crossing to Queens Promenade seem fine, though the pavement illustrated in the proposals seems unnecessarily wide. An "improved gateway" to Kingston should include cycle paths continuing in both directions to and from Kingston Market Place where they could join up with other existing and proposed cycle routes.

Further comments
As local residents, environmentalists and cyclists, Kingston Environment Forum (KEF) members were delighted when the Council won funding for the mini-Holland scheme, and remain very supportive of its aim of encouraging many more people to take up cycling by making it safer and pleasanter. But we find ourselves somewhat underwhelmed by these proposals for the first phase, and concerned that they will not achieve these aims and could set an unsatisfactory pattern for the rest of the scheme. The lack of continuity and proper segregation from other traffic means that this proposed route on a very busy road is unlikely to make children or timid or novice cyclists feel safe or take up cycling as a regular form of transport.

KEF is the consortium of local environmental organisations that works with Kingston Council to promote environmental sustainability in Kingston upon Thames. KEF includes representatives from a range of local groups with an interest in environmental issues and activities in the Borough. We meet regularly to share information, concerns and expertise with relevant Council officers, and KEF representatives also attend Kingston Strategic Partnership meetings.

As local stakeholders and members of Kingston Strategic Partnership we request updates and information on the scheme as it progresses. Within our group there is considerable local knowledge and experience of cycling in the Borough and we believe that we can make valuable contributions to shaping these proposals, which, if they had greater community involvement and buy-in, would be more likely to achieve their aims. However the mini-Holland scheme develops, its infrastructure is likely to be with us for a long while so it is important to get it right and spend the funding in ways that will improve and increase cycling substantially - and in doing so would improve air quality, community health and fitness, and reduce car traffic and demands on public transport.

Our previous, more general, comments on cycling in Kingston and the mini-Holland scheme in July 2014 (and request to be informed and consulted) can be read at http://e-voice.org.uk/kef/about/view/KEF_statement_on_cycling_in_Kingston_2014.pdf

KEG comments on "Greening Olympics", 2012
We commented on issues around the 2012 Olympic cycling race, which came through Kingston - you can read our comments here.

"Our insanely inefficient transport system is in thrall to the metal god. Electric vehicles are not the answer, " writes George Monbiot in The Guardian, 1/8/17 -  https://www.theguardian.com/commentisfree/2017/aug/01/car-chokehold-britain-polluted-inefficient-transport-system-motor-industry

"Sadiq Khan made big promises to make London bike-friendly, and now it’s up to Will Norman to deliver. In a rare interview, the walking and cycling commissioner defends his plans" The Guardian, 5/4/17 https://www.theguardian.com/cities/2017/apr/05/will-norman-london-new-walking-cycling-czar-commissioner-mayor-sadiq-khan

“…in London – people would need to cycle over five hours per week before the pollution risks outweigh the health benefits,” Financial Times, 2/9/16 - https://ig.ft.com/sites/urban-cycling/

The Complete Business Case for Converting Street Parking Into Bike Lanes - An annotated, chart-filled review of 12 studies from around the world

Campaign for Better Transport's A cure for London's congestion?