Although regarded by many as one of the most famous of Bradfordians, W E Forster was in fact born in Dorset in 1818 to Quaker parents. On leaving school he was put into business (wool) and found employment in Norwich and Darlington before arriving in Bradford in 1841. After a year he joined with a member of the Fison family (with whom he had worked in Darlington) and bought a disused cotton mill at Burley-in-Wharfedale converted to wool. The business prospered and he remained connected with it for the rest of his life.

In 1850 he married Jane Martha, eldest daughter of Dr Thomas Arnold, headmaster of Rugby School and it was perhaps through this connection that his interest in education was first aroused. The Forsters had no natural children, but when Mrs Forster's brother, W. D. Arnold, died in 1859, leaving four orphans, the Forsters adopted them as their own.

Because of the success of his business he found time to devote himself to many of the social problems of the day. In particular the living conditions that many of the young families that had moved to Bradford to find work. He regarded himself as a Reformer and tried unsuccessfully to become a member of the town council for East Ward and as a Liberal M. P. For Leeds in 1859. In 1860 Titus Salt resigned as M. P. For Bradford and Forster was elected unopposed on 11th February 1861. During his time at Westminster he was responsible for The Elementary Education Bill which was introduced on 17 February 1870 and school boards were set up with elected representatives. This set the framework for schooling of all children between the ages of 5 and 12 in England and Wales and is regarded as the major achievement of his career.

In 1875, when Gladstone "retired," Forster was strongly supported for the leadership of the Liberal party, but declined to be nominated but on Gladstone's return to office in 1880, he was made Chief Secretary for Ireland. This was perhaps his most difficult period in office as he had to have constant police protection when in Dublin. In 1882 Forster resigned after Gladstone released Irish political prisoners and on the following Saturday, Forster's successor, Lord Frederick Cavendish, was murdered in Phoenix Park, Dublin.

Forster died on 6 April 1886 whilst still an M.P. a funeral service took place on 9th at Westminster Abbey and on the 10th his remains were laid to rest in Burley. His death was greatly lamented in Bradford and many people wanted a permanent reminder of him for the work he did for Bradford especially for the young children. The original idea was to build an Art Gallery and Museum to be built in the centre of town but the fact that Bradford had no collections of its own and the cost of such a project meant that it was decided that a statue should be placed in Forster Square. The cost being raised by public subscriptions.

The design of the statue was given to three of the leading sculptors of the day with the final design won by J. Harvard Thomas and the casting went to Henry Young & Co. Pimlico. The base was built of Aberdeen and Peterhead granite by William Wright & Sons Otley Rd. Bradford.

The statue was unveiled to the public on Saturday 17th May 1890. Saturday being chosen so that many Bradfordians could be present. The day started with a luncheon in the lecture hall of the Technical College followed by a procession led by the Black Dyke Mills Band to Forster Square where a crowd of over 10,000 watched the unveiling of the statue. 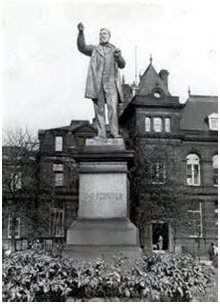