The trolleybus dates back to29th April 1882, when Dr Ernst Werner Siemens demonstrated the Electromote in a Berlin suburb. His experiment continued until 13th June 1882 after which there were few developments in Europe. Separate experiments were conducted in the U.S.A.

In 1899 another vehicle which could run either on or off rails was demonstrated in Berlin, quickly followed by another design, when Lombard Gerin operated a line at the Paris Exhibition of 1900

Bradford's first transport manager Mr Christopher John Spencer did much to lay the early foundations. In 1910, after a visit to Germany and Austria, he said in a lecture that the rail-less electric transport system as it was then called should be installed with considerable financial advantage to the city. The meeting was so impressed by his findings that a parliamentary bill was promoted giving the city powers to run such a system.

On the 20th June 1911, the then Lord Mayor of Bradford, Mr Jacob Moser, operated a switch that set the city's first trolley bus in motion. On the same day a similar ceremony took place in Leeds.

The first passenger service started in Bradford on June 24th 1911 and ran from Laisterdyke to Dudley Hill, a distance of 1 mile 460 yds.

In June 1961 Bradford City Transport celebrated 50 years of a continuous trolley bus service. During those years 47 routes had been inaugurated and these were served by 187 vehicles.

The two original “ tracklesses”as they were called were single deckers seating 28 persons, their overall length was 20ft and they were 7 ft wide.

The fare for the journey was 1d and even at this early stage a letter to “The Bradford Daily Telegraph “ was received complaining the fare was to high. It was suggested that more people would travel if ½d stages were introduced.

From then on the story is one of progress, the Odsal to Oakenshaw route was introduced and later extended into the city.

The original route was extended at both ends to form the Bolton - Bankfoot route, with the Forster Square – Bolton Woods route was added the year after.

In 1920 the first double decker took to the road to be followed by a similar vehicle which had 4 wheel steering.

These double deckers were the subject of ridicule. They were dubbed “The Flying Cottage Loaves” and on cobbled surfaces they cause windows to shake and pictures on the wall to move there position.

In 1926 the Clayton route was opened using single deckers.

On December 1st 1929, the trolley bus really came to town. On that day large six wheelers started on the Allerton route.

Idle ,Thackley, Thornton, Duckworth Lane, and Lidget Green were the routes where in quick succession the trams were replaced by the tracklesses as the network was brought into being.

The Wakefield road route to Dudley Hill and Tong Cemetery came into operation in 1938, and the following year the 7 mile long route to Cross Flats was started with hundreds of people saying farewell to the tram.

A more roomy and commodious 8 foot wide vehicle came into operation during the second world war, when the government released a number of vehicles intended for Johannesburg to use in this country, Bradford thus got the windfall of 8 new buses at a time of severe strain. 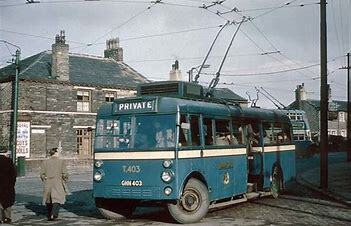 Although motor buses took over many of the tram routes after the war, Bradford Moor became trolley bus territory in1949 and Thornbury depot opened in 1952.

An intensive programme of renovation was put into operation. Chassis and motors considered useful for further service had new bodies fitted. A new style body which increased the seating capacity from 56 to 63 was introduced. Light blue moquette or leather seating, chrome hand rails and a bright blue and cream interior made for a pleasant journey.

Extensions up the Avenue at Clayton and to the Thorpe edge edge housing estate were brought in to being.

The Bradford system lasted the longest of all the UK's urban trolleybus systems having been one of the first two such systems to open, it was also the last one to close, on 26 March 1972.

Many of the former Bradford trolleybuses are now preserved at various locations around the UK, including eleven of them at the Trolleybus Museum at Sandtoft, Lincolnshire.

On Sunday, March 26, 1972, the end of a trolley bus transport era occurred in Bradford.

Bradford’s last trolley bus left the city centre, heading for Thornton and full of enthusiasts for this mode of transport that had been pioneered in the city. Bradford had enjoyed a long and enduring love affair with the trolley bus and was the last authority to get rid of them.

They were clean, quiet, non polluting and reasonably comfortable but there were major problems when the system suffered a power cut.