A Brief History of Clayton 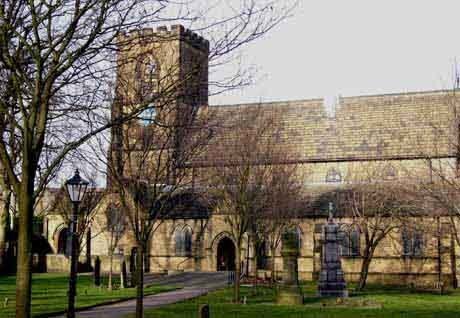 The village of Clayton lies three miles west of Bradford, of which it is now a district. It is an ancient settlement, having been mentioned in the Domesday Book. Until 1930, when it was somewhat reluctantly incorporated into Bradford, it was independent, having been privately owned from 1160 until 1866 when the Local Board was formed. The Board's first meeting was on the 13th April 1866 and its responsibilities included management of highways, footpaths, street lighting, cleansing, sewage, refuse collection and the laying of pipes for water and gas. Following the 1894 Local Government Act the Local Board became Clayton District Council, which took over the Board's responsibilities and also opened sewage works and filter beds in 1899. For several years the council also operated its own fire fighting crew until the village became too large and it became necessary to pay Bradford Corporation for fire and ambulance services. In 1851 the Parish Church had been built on land donated by John Hirst of Clayton House. The Methodists and Baptists also had their own churches, the present buildings being the third of their kind. The Gospel Hall (1927) and St Anthony's (1961) followed. All the churches are still active, being well attended for Sunday worship as well as providing some of the social life for the village. In 1819 the first village school was opened. This was built by public subscription on land given by the then Lord of the Manor Richard Hodgson. This school was followed by the National(Church of England) and Board schools and the original school now houses the village library.

Before becoming part of Bradford, Clayton was a very independent community, there were several shops and businesses employing local labour. Since the 18th century hand loom weaving and spinning had been carried out in the homes of the villagers, as had shoe making and mending. During the 19th and early 20th centuries, Clayton's main industry was worsted manufacturing. Alfred Wallis, Asa Briggs and Joseph Benn being the principle manufacturers at Oak Mills and later Joseph Benn and Sons at Beck Mill. Other businesses included quarrying, coal mining, brewing and maltsters and Clayton Fireclay Works, owned by Julius Whitehead at Hole Bottom. Gradually over the years these industries have declined as have most shops and local people mainly commute to work. There has always been a number of farms in the area and to a lesser extent there still are and despite the vast amount of building that has taken place, there is still green land and Clayton is still separated from Thornton ,Queensbury and Horton Bank Top by fields.

In the centre of the village is Victoria Park, opened on the 23rd July 1898 on land that had previously been the village green. The opening by Asa Briggs J.P. attracted a large crowd and the park became a popular meeting place, taking over from the "Wells" area at Green End. During the 19th and early 20th centuries much of the entertainment centered around the churches, where concerts, bazaars and functions were held. There were also several pubs, the oldest being the Whittle and Steel at Town End, together with The Crown on Bradford Road and the Sportsman at Green End which in later years were converted into houses. The Quarry, Albion, Fleece, Royal and The Black Bull public houses are all still in existence. The Liberal Club, built in1877 and which is now the Village Hall and the Conservative Club (1892) are popular meeting places. There was a Working men's Club which was demolished in 2002 to make way for a Co-op. Clayton had its own silver prize band and a cinema "The Rialto" closed in the seventies. Sport is well catered for with Football, Rugby, Bowls, Golf and Cricket teams.

For those who preferred to travel to find work and entertainment Clayton was well served by public transport from the late 19th century. In October 1874 the Great Northern Railway opened to Clayton, followed in October 1878 by the Bradford - Keighley and Halifax lines. Both Clayton and Queenbury stations were easily accessible, until 1955 when, together with others, the line was closed. A trolley bus service started in 1926 to be replaced by motor buses in 1972. Although Clayton has seen many changes over the years it still retains some of its village character. The population has increased from 2040 in 1801 to over 9000 today.