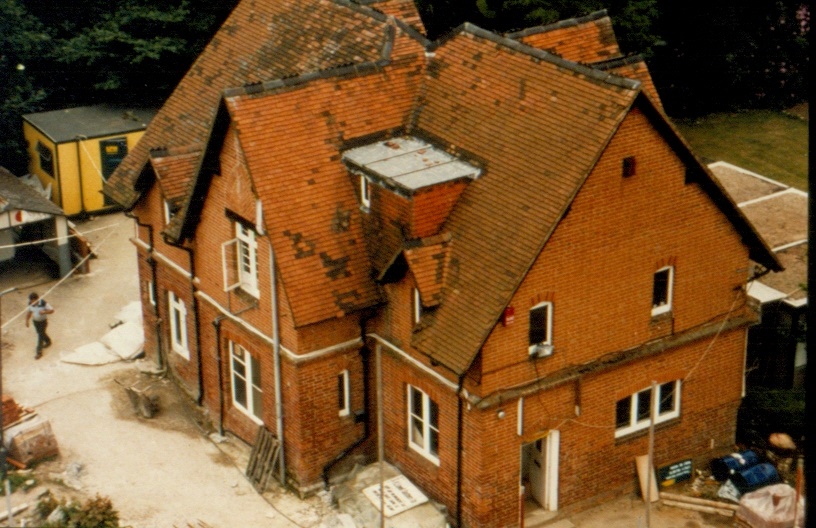 Newstead - one of the original homes of the museum collection,  prior to the building of Surrey Heath House.

SURREY HEATH MUSEUM : A HISTORY OF THE SERVICE

Like many similar museums, Surrey Heath Museum evolved from the initiative of a  local enthusiast; in this case, Mr George Poulter.  A noted Camberley historian and antiquarian,  who, in the mid 1930s, put his own collection at the disposal of the Council for the benefit of the public.   The service began in 2 small rooms and a corridor of the former Frimley and Camberley Municipal Buildings. It had 1 member of staff, Mr Poulter, who acted as Honorary Curator, and almost no budget. Opening hours were very limited. Camberley Museum  served only the Camberley area. During the War, the service was closed down altogether, and it is believed that some of Mr Poulter's own collection was accidentally disposed of at that time. However, the Museum survived and received further impetus in the years after the War, when the newly-formed Camberley Natural History Society deposited some of their study material.

In the 1950s, when George Poulter  was looking towards his retirement, a new post of School's Organiser was established and Miss Hilda Rendle was appointed. The title of School's Organiser emphasised the stress which the Council wished to place on the educational facilities provided by the Museum. Although opening hours were still very limited, and space even more so, the museum became an important part of the local community..  During the late 1950s and 1960s, the need to rehouse the Museum was recognised, and discussions took place on the provision of a purpose-built museum in Camberley. At the end of the 1960s the museum was rehoused in "Newstead", a Victorian house just off Knoll Road. These premises, were shared with the local Arts Society. Additional staff posts were created.  Miss HIlda Rendle retired and Mrs Maureen Rendall became Curator and joined by a Museum Assistant and Museum Attendant.

Plans to redevelop the Knoll Road site to provide new Civic Offices were agreed in the early 1980s and Newstead was to be demolished. The museum closed and the collections were moved up to a site on London Road, where a portacabin to store the artefacts was installed in the garden of a small shop. The shop itself was intended to provide a small temporary display space and a cataloguing project of the whole collection was started.  By 1984,  the Museum was without any professional staff and under threat of closure; local feeling was such that the Council was persuaded that the service should be saved.

The new Surrey Heath Museum had a permanent home on the second floor or the newly built civic offices, Surrey Heath House on Knoll Road with full quota of staff - Curator, Sharon Cross and Museum Attendant.    It remained there for 34 years, running exhibition, events, outreach service and building up a comprehensive collection and archive on the history of Surrey Heath.   In  2017  SHBC councillors made the decision to permanently close the museum in the council offices and look for a venue where footfall would be more assured.  After public consultation and parntership working with Surrey Heath Museum Action Group, the two organisations joined together creating Surrey Heath Museum and Heritage Gallery in the The Square shopping centre, Camberley.