A river in crisis - the facts

Since Friends of the Ems was launched in August 2020 we’ve done a lot of research, which has included uncovering past reports, speaking to experts, studying data and recording the memories of local people.

We've summarised our findings in a presentation outlining why the river is in trouble. Watch it here on YouTube.

Or you can see the slides from the presentation at the bottom of the page (pdf).

Below are some frequently-asked questions with more details.

Some documents and reports of interest are also at the bottom of this page. 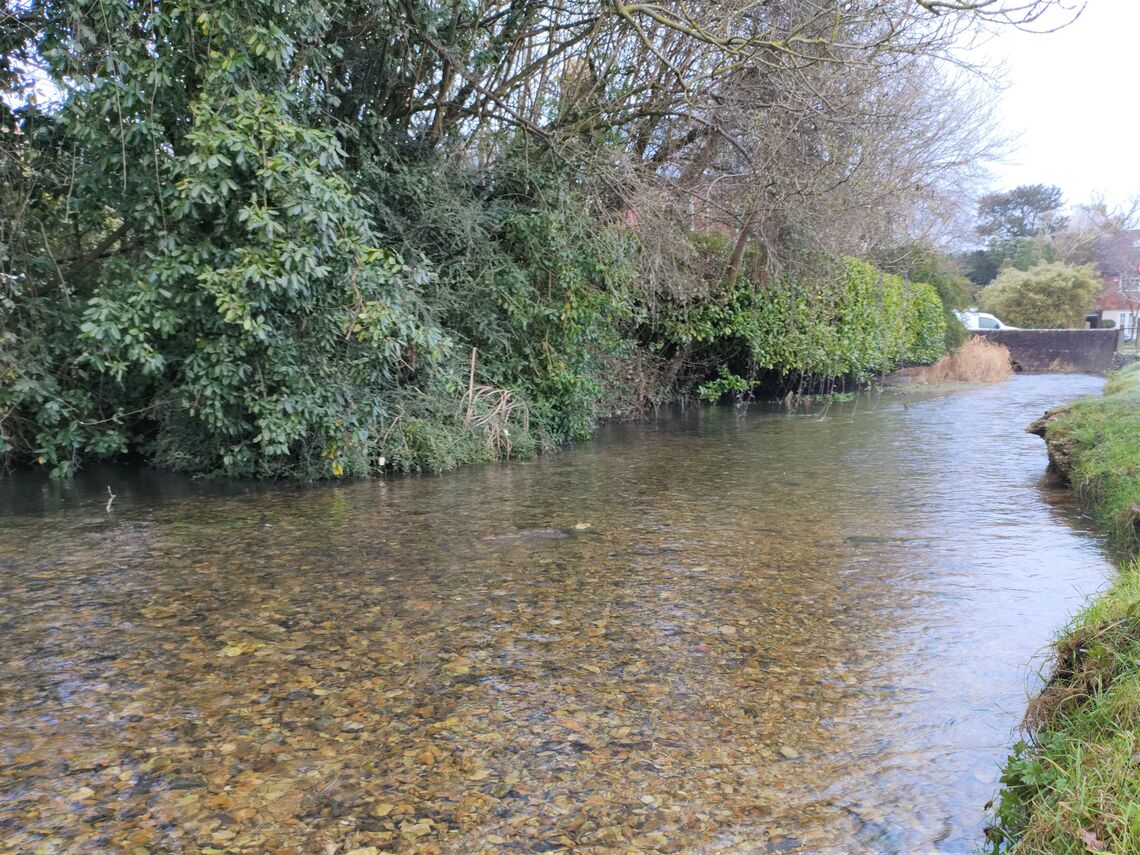 The millstream section of the Ems at Westbourne, after winter rain, January 2021.

1. What is the evidence for saying the Ems flowed more strongly in the past?

There is plenty of evidence to indicate the river was much stronger before modern-day abstraction (removal of water from its underground sources) by Portsmouth Water in the 1960s.

We do not believe that climate change or urbanisation can account for this reduction in the strength of the river.

In the last 50 years it has become quite common for the millpond at Westbourne to dry out in dry summers, despite Portsmouth Water pumping water into the river above the village.

In late September 2020 the river dried out so badly that it was dry at the bridge in North Street, Westbourne and not much more than a chain of puddles through the village, with minimal flow between the village and the A27. This is worse than anyone can remember, and it happened in a year that had not been particularly dry. The river had already been on the edge of drying out. But it reached crisis point when Portsmouth Water failed to meet their contractual obligation to pump water into the river at times of low flow (due to faulty equipment), and as a result dying fish had to be rescued by villagers from puddles at various places in Westbourne (many more were taken by herons and egrets who flocked to the area).  After five days the company began augmenting the river with pumped water again, but the river remained extraordinarily low until the autumn rains came in mid to late October.

Several reports on the Ems accept the impact that abstraction has had on the river and its biodiversity. Abstraction rates have been pretty constant over the last 50 years but the condition of the river has got steadily worse – reflecting the unsustainability of the abstraction, especially during a period of changing climate.

For now, the Ems supports iconic chalkstream species including the water vole, kingfisher and brown trout. There have been sightings of otters. Notable plants have been found, including a rare algae and a rare liverwort. It is highly likely that continuing deterioration could see some of these species become locally extinct.

2. Isn't the Ems a winterbourne?

A winterbourne is a stream or river that is dry through the summer months.

We can all agree that the Ems, like neighbouring rivers, does dry up in its upper reaches in late summer, and always has done. Is there a point above which the river is always intermittent, and below which it is perennial (constantly flowing)? That depends on your definition of ‘always’, because the climate has varied from year to year and century to century. However, the Ems was probably perennial at a point just below Aldemoor/Lord’s Fishpond before abstraction began in the 1960s.

3. What about the need for drinking water? Shouldn't that come first?

The situation is much more complex than a simple ‘one or the other’ choice between drinking water for consumers and a healthy river.

We fully accept that having enough water in our taps is of vital importance. This is a valuable service. But the social and environmental benefits of a fully functioning river are also of immense value to society.

The Ems is a very rare chalk stream, one of only about 200 of its kind on Earth. The UK has about 70% of all the significant chalk streams on the planet, and the Ems is relatively unpolluted compared to many others. It is a crucial habitat for all kinds of organisms, from rare forms of plant life to dragonflies, kingfishers and water voles.

It is also a vital resource for local people. Walkers find beauty and relaxation along its banks. Children play in it, feed the ducks, catch tiddlers and experience nature. It has a huge role in the wellbeing and mental health of the community.

Meanwhile, horses and farm livestock drink from it, and dogs use it to splash in.

Unlike a domestic water supply, these services are difficult to price in terms of pounds and pence. But do we want to lose them?

The Friends of the Ems believe it must be possible to find a way of reducing pressure on the river while maintaining a water supply. That’s why we have been in discussions with Portsmouth Water to explore short, medium, and long-term goals to reduce the amount of water it will require from the Walderton pumping station.

Watch our presentation for more thoughts on this.

Slides from the Friends of the Ems presentation June 2021

Other reports and documents of interest