The Domesday Book & Beyond

We start with the Domesday book and before, as the remains of a Roman pottery has been discovered at North Grange Farm in Ellerton.

The Domesday Book is the great land survey from 1086, commissioned by William the Conqueror to assess the extent of the land and resources being owned in England at the time, and the amount of the taxes he could raise! The information collected was recorded by hand in two huge books, in the space of around a year.

Why is it called the 'Domesday' Book?

It was written by an observer of the survey that "there was no single hide nor a yard of land, nor indeed one ox nor one cow nor one pig which was left out". The grand and comprehensive scale on which the Domesday survey took place and the irreversible nature of the information collected led people to compare it to the Last Judgement, or 'Domesday', described in the Bible, when the deeds of Christians written in the Book of Life were to be placed before God for judgement.

Why was it made?

With the need to defend England from possible invasion threats from Scandinavia, and costly campaigns being fought in northern France, the vast army William amassed required substantial funding. The power to raise Danegeld - a uniform tax to pay for the defence of the country - had been inherited from the Anglo-Saxons, and William saw the need for the Domesday Book as a thorough assessment of the potential amount of tax he could raise from his subjects and their assets. The survey also served as a gauge of the country's economic and social state in the aftermath of the Conquest and the unrest that followed it.

Ellerton & Aughton both appear in the Domesday Book. Have a look at the transcript translation below to see if you recognise any of your ancestors. 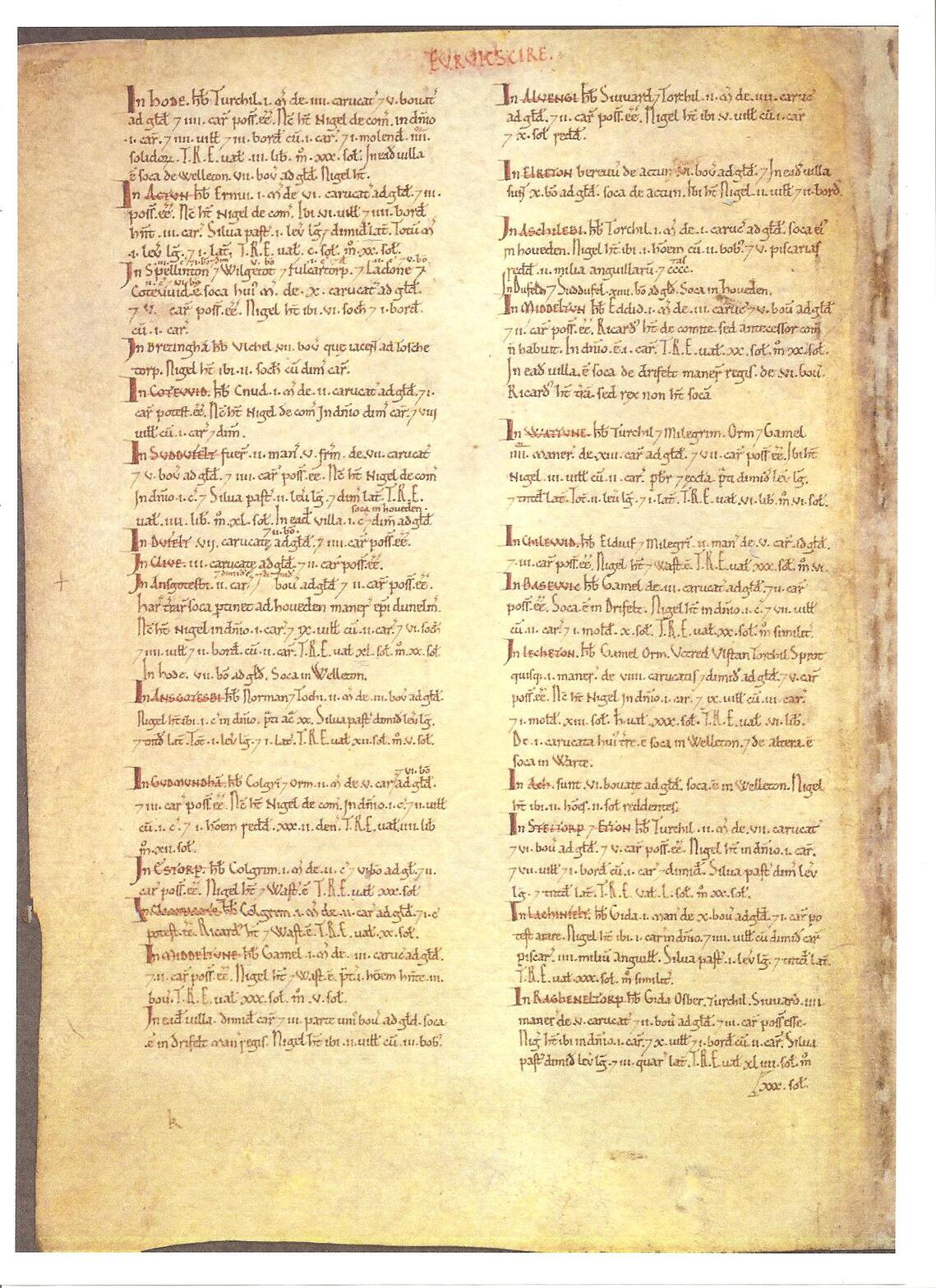 TRANSLATION -
" In Aughton, Earnwig had 1 manor of 6 carucates to the geld, and there could be 3 (ploughs). Now Nigel has it of the count. There are 6 villans and 4 bordars have 3 ploughs. (There is) woodland pasture 1 league long and half broad. The whole manor (is) 1 league long and 1 broad. TRE worth 100s. Now 20s. On the testamony of the jurors, the 3 1/2 bovates of land which Ralph de Mortimer claims in "Lund" (in Breighton) belonged to, not to Eadgifu, whose land Ralph de Mortimer has. Concerning all the land of Asa, (Alwine, the predecessor of Gilbert Tison), they testify that it ought to belong to Robert Maler, because she herself had her land seperate and free from the rule and control of Beornwulf, her husband, even when they were together, in such a way that he himself could make neither gift nor sale, nor forfeit it. After their seperation, she herself withdrew with all her land, and possessed it as its lady. But the men of the shire have seen Willaim Malet seised both of that (land) and of all her land, untill the castle was attacked. This they testify concerning all the land of Asa which she had in Yorkshire. They say that the land which Earnwine the priest claims in Aughton ought to be his: but Nigel Fossard calls the king as warrantor, concerning this land, for the use of Count Robert.
In Aughton the Count of Mortain 6 carucates.
In Ellerton, a Berewick of Aughton, the Count of Mortain 2 caracutes. In the same place, the king 2 carucates.
(Also) 6 bovates to the geld: and in the same vill are 10 bovates to the geld, sokeland of Aughton Nigel has 2 villans and 2 boarders there. Nigel has relinquished 2 carucates of land in Ellerton, which belonged to Barn and Ulf."

Villans –  Villager. Member of the peasant class with most land.

TRE –  Tempora regis Eduardis - Before 1066- In the time of King Edward the Confessor; by implication, when all the realm was legally correct & ownership would have been rightfully secured

Sokeland - land considered to be the property of the occupying peasants, rather than the lord.