Mr Worswick then rented the Hall in 1863, to David Nutt for "14yrs at a yearly rent of £1,050".  It is mentioned that cottages and a joiners shop were also rented to the Nutts, along with "more allotments with 2 cottages" and part of a farm which was known as "The Town Farm", North Ross Farm & South Ross farm and a House with garden in Ellerton.  Mr Worswick also rented to William & Robert Featherby "The Leaze" "Cottingwith Close"(5 acres) for 14yrs at a yearly rate of £250

At some point the Hall and Estate were sold, as in 1899 James Lund from Malsis Hall, who died in 1903, left the estate including Ellerton Hall to his wife Janet Lund, to live in 'whilst staying a widow and quarterly sums of £1000'.  She died in 1913.  James Lund's will stated that after his wifes death the Estate should pass to his sons Frederick James & Reginald William, and his son-in-law W.H.Holland, which it did in 1913 following Janet's death.

In 1918 the Hall was tennanted back to the Nutt family, under T. Nutt (presumably Thomas), along with North Ross Farm,The Hall Farm, & Town or Priory Farm, six Cottages & the Croft.  Also in 1918 South Ross Farm was tennanted to Thomas and Charles Watson .

Reginald seems to be the sole owner by 1920 and was forced to sell some land to the council for £16.10/= "for the purposes of erection of houses for the working class".  On 10th October 1925 he sold Priory House Farm to Mary Ann Elizabeth Wetherell and auctioned off the remaining Estate & Ellerton Hall under the name of his father, James Lund.

On 16th July 1925 Ellerton Hall Estate was auctioned, the paper of which can be seen here. 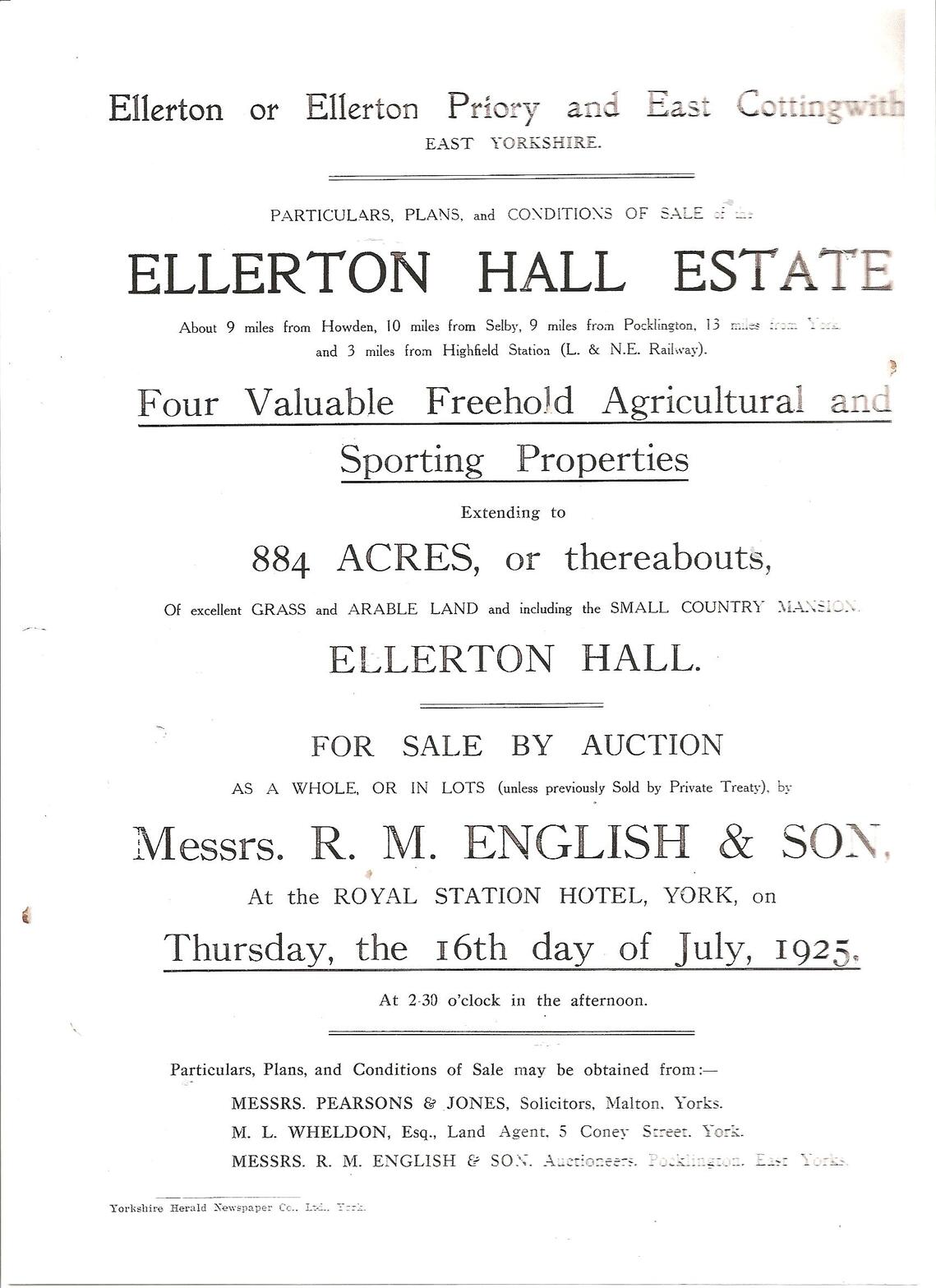 Aughton Hall is a particularly fine small Georgian country house with a coach house and land.

The hall stands to the east of the orginal Norman church, on the site of the moated house which belonged to the Aske family in the 12th century.  It is still possible to follow Robert Askes footsteps from the house, across the small bridge over the old moat and into Aughton's Churchyard.

In the 1980's, a tunnel was found in the grounds of the Hall linking Aughton with Ellerton.  Cellars were opened up and suits of armour were discovered which were given to a local museum.  The following link shows the documents that have been found regarding Aughton Manor (now Aughton Hall) - Aughton Hall History