We researched the names on the village memorial for the commemoration of WW1 and some of the information is given below.  Tony Pringle has also produced a website of information on those who died in the First World War which includes Sturmer see www.undyingmemory.com

Charles was born in 1883, the son of Harry and Fanny Kiddy.  In 1911 they were living at France Cottages, Bumpstead Road (near Copse Hall Farm). Harry was an agricultural labourer and Fanny and Charles were hair cloth weavers.

Charles had two younger brothers, Frederick and David and three younger sisters, Maud, Daisy and May.

Charles was a Lance Serjeant in the 1st/5th Battalion of the Suffolk Regiment (Regimental number 240645). He died in Egypt of wounds on 16 July 1917 and is buried at Deir El Balah which is in Palestine. The Commonwealth War Graves Commission report that this memorial was damaged by a bomb in 2008 which reminds us of the current conflicts in the area.

In February 1917 the Eygptian Expeditionary Force entered Khan Yunus causing the Turks to withdraw. The railway was pushed forward to Deir El Belah and an aerodrome and camps were established.

Charles’ brother, Frederick who had been an agricultural labourer was 20 when he had been killed in action in France on 14 October 1916. He was a Private in the 9th Battalion of the Suffolk Regiment (Regimental number 40560 – formerly 4459). He is remembered at the Thiepul Memorial to the Missing of the Somme from July 1916 to 1918. Campaigns which saw catastrophic losses.

Frederick Durrant was 14 years old in 1911 and living with his family near The Red Lion PH in Sturmer. His father was a beer retailer and farmer and his older brother, Donald was a shop assistant for readymade clothing. Frederick was a farm worker and his younger brother, Bertrum was at school.

Frederick was a Private (Regimental no. 48116) with the London Regiment Royal Fusiliers when he was killed in action on 10 August 1917. He had enlisted at Colchester.

He is remembered at the Menin Gate, Ypres, Belgium. This is one of four memorials to the missing in Belgium which covers the area known as the Ypres Salient. This salient varied in area and shape throughout the war.

The third battle of Ypres took place in 1917 when an offensive was mounted by Commonwealth forces to divert German attention from a weakened French front further south. The initial attempt in June to dislodge the Germans from the Messines Ridge was a complete success. However, the main assault north eastwards which began at the end of July quickly became a dogged struggle against determined opposition and the rapidly deteriorating weather. The campaign finally came to an end with the capture of Passchendale.

Thomas Ford is included in a report on the Haverhill Roll of Honour (1914 -1919) by Suffolk Family History Society – Haverhill Group and I’ve included some extracts from it below.

Thomas was employed as an errand boy at a garden nursery in 1911 but by the time of WW1 he was employed by Walter Mason at Manor Farm Haverhill. He had been born in 1897, the son of Thomas and Eliza Ford. He was given the middle name of Whittaker after his great grandfather. His family lived at Challis Yard for many years. His mother worked as a glovemaker and his father as a bricklayer’s labourer.

From our baptism records we can see he was baptised at St Mary’s church, Sturmer on 11 July 1897 (and born on 22 April).

Thomas enlisted on 19 January 1916 and was posted to the 2nd Battalion Royal Fusiliers (Service no. GS/48120), who landed at Marsuilles, France in March. He was wounded on two occasions but returned to the front line for the last time with a piece of shell still in his chest.

In the Spring of 1918 the German Army had launched a massive offensive called the Kaiser’s Battle and Thomas’ battalion was involved in desperate fighting during April in Flanders.

Thomas died of wounds on 5 July, aged 21 at No 2 Casualty Clearing Station and was laid to rest in the Ebblingham British Military Cemetery.

Rose Ridgewell sent me details of Arthur Ridgewell. She has told me that there were at least four generations of Ridgewells in Sturmer before Arthur. Most were interred in the churchyard of St Mary’s but there are no gravestones. Many of the men were agricultural labourers.

Arthur was born in Sturmer in 1882, the eldest child of John Ridgewell and his wife Julia (nee Whips). In 1891 the family was living at Bull’s Farm (now Abbotts Farm) but in 1899 his father died leaving Arthur head of the household. In 1901 the family was living in The Street with Arthur as a stockman on a farm. By 1911 they had moved to Spring Cottages (the terrace on the right as you drive into Haverhill which was once included in Sturmer).

Arthur was conscripted in December 1916. He was a Private in the 4th Battalion of the Suffolk Regiment (Service no. 329215) and died on 22 November 1917. He is remembered on the Tyne Cot Memorial. This contains the names of almost 35000 officers and men whose graves are not known who died as a result of battles in the Ypres area.

I found Walter Bailey in Sturmer through the census records in 1901. He was living at the Sturmer Hall estate with his family. May be they lived in the cottages which have now disappeared? There is only a spinney left to mark them on the footpath from opposite the Red Lion to Sturmer Hall.

He had been born in 1884 in Cowlinge where the Bailey’s had lived for about 100years. He was the first child of three born to John and Agnes Sarah nee Bannister. He was followed by Jephtha Thomas (1886) and sister Laura Jane in 1888. After 1891 the family moved to the Sturmer Hall estate where their father worked.

In 1901 Walter was working there as a stockman for cattle.

In January 1911 he married Ellen Eliza Sizer, a Sturmer girl at St Mary’s church, Sturmer. Walter was working as an ostler ( a horseman often at a pub) and they were living in King Edward Road, Newmarket.

Walter and Ellen’s first two children died very soon after birth but two sons and a daughter were born after that: Lesley in 1914, Walter in 1915 and Brenda in 1916. 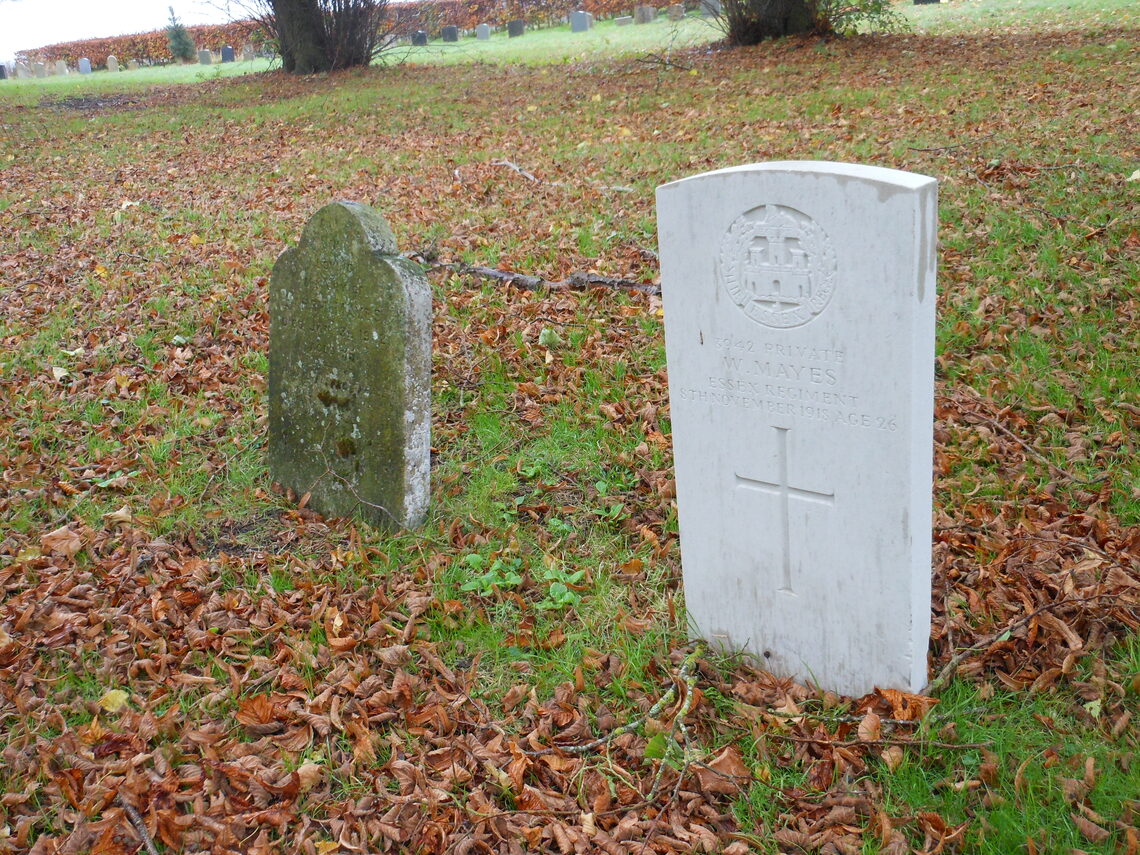 William Mayes is buried in the churchyard of St Mary’s church, Sturmer.

We believe he was baptised there on 7 July 1892. We think he is the son of George (an agriculatural labourer) and Dolores Mayes who lived in Maltings House, Sturmer (where the thatched cottages are now by the war memorial). There are still a number of people living in this area named Mayes.  We believe William was a domestic groom in 1911.

William was in the Labour Corp. Injured servicemen were sometimes transferred there if they were not fit enough to return to active duty. However, we have contacted the Essex Regimental Museum and it does not seem that William served overseas. He was Private 3942 in that Regiment.

Sadly, he passed away on 8 November 1918 just three days before the end of the war.