Back in 2012 residents of Sherland Road in Twickenham, designed and built a garden on disused land at 98 Sherland Rd. Since then, this space has brought the community together to help maintain the space whether by watering, planting, weeding or generally keeping the garden tidy. The garden also attracts an array of birds and wildlife including the endangered stag beetle.

The hedges that were originally planted 6 years ago have now reached almost 10ft, so we have launched a crowdfunding campaign with South West London Environment Network, to create hedgerows that will become a home to valuable at-risk wildlife such as beetles, butterflies, song thrushes and hedgehogs. Colin Cooper from SWLEN is keen for the work to go ahead. “Hedgerows are vital ecosystems for wildlife across the UK, but they don’t just occur naturally, but rather they must be ‘created’ through a technique called layering”.

The crowdfunding campaign was successful in reaching its target! We were able to provide The Conservation Volunteers (TCV) with tools and materials to carry out the work. Laura Brackenbury from Richmond TCV explains “Hedge laying is a technique that has been used to manage hedgerows since before the Romans, and as such is a part of our landscape heritage. Hedge-laying not only controls the height of a hedge, without having to resort to strimmers, but also, in the long run, creates a denser, more evenly vegetated habitat” The group is welcoming of new volunteers, and as such will offer the unique opportunity for local residents to the gardens to try their hands at the ancient art of hedge-laying.

Our Annual "bring a bauble" event, to decorate our Christmas Tree will be held on Sunday 6th December from 3pm - 4pm.

We have been award a Silver Gilt in this year's Richmond in Bloom best Environmental Garden or Project category.

Our Annual "bring a bauble" event, to decorate our Christmas Tree was held on on Sunday 7th December.

It's Your Neighbourhood and Richmond in Bloom Awards

This year, we were thrilled to be awarded Level 5 : OUTSTANDING by the Royal Horticultural Society It's Your Neighbourhood Awards.  Last year (our first year) we achieved Level 4 "Thriving".

As a road, we successfully raised the money to opt for Heritage Lamp Posts instead of the standard replacements. these were installed in the summer as scheduled and further enhance our lovely road.

We have recently won two awards for our community garden:

Our garden was awarded GOLD in the SERCO Environment Awards and we were presented with a Certificate at York House on Tuesday 1 October. 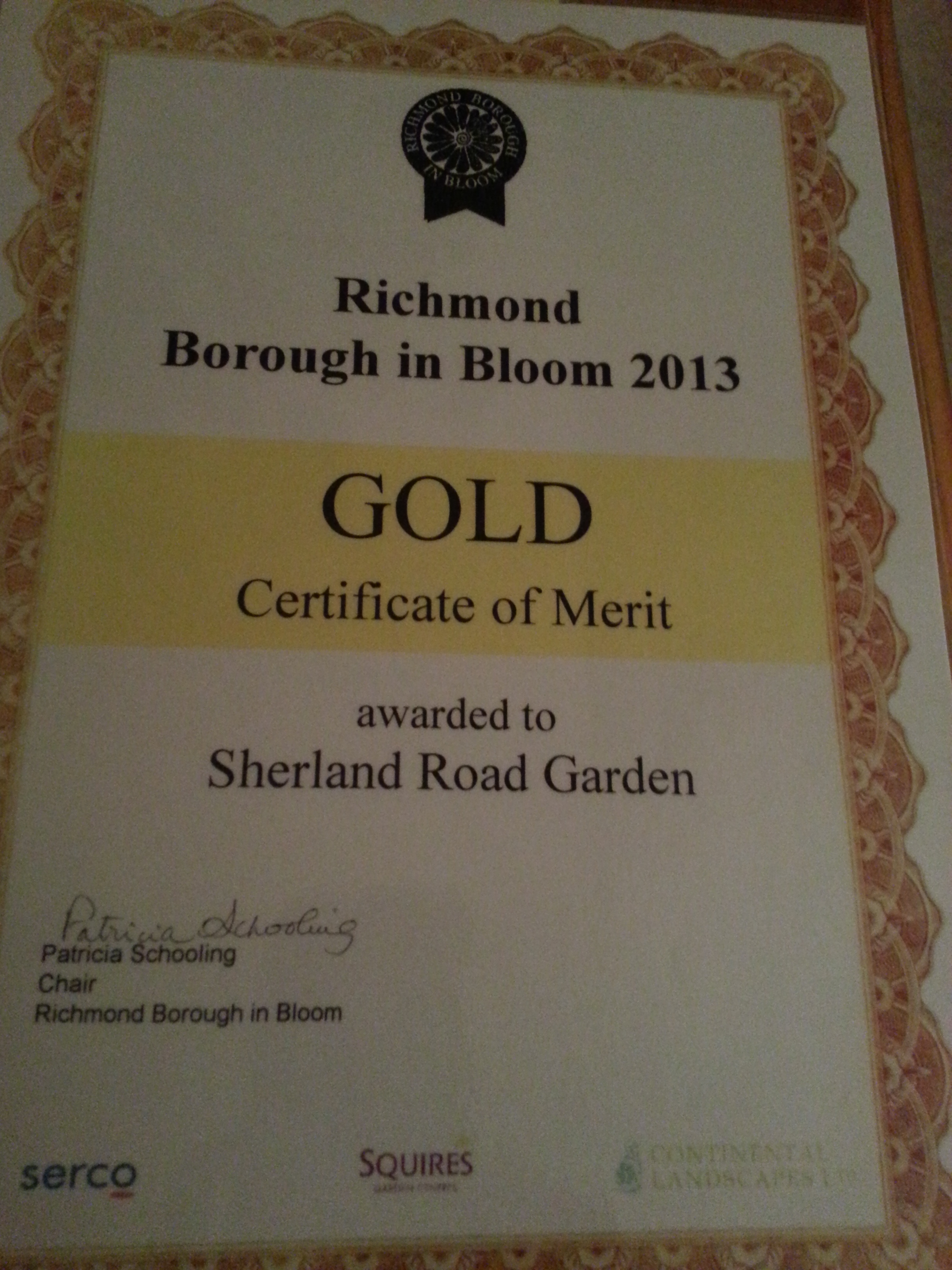 As part of London in Bloom, the Royal Horticultural Society ran an "It's Your Neighbourhood" competition.  Every garden that was entered was ranked from Level 1 - 5.  The Certificates were presented at Pembroke Lodge on Wednesday 18th September. Our garden was awarded Level 4: Thriving and was only 3 marks away from Outstanding.  Something to strive for next year....? The garden in September....

On Sunday 16th May 2013 we showcased our garden at the GARDEN FESTIVAL EVENT IN CHURCH STREET, TWICKENHAM.

On 14th May 2013 our specially commissioned, unique bench which was carved by Paul Sivell, of The Carved Tree has arrived!  The fox and seat are carved from one solid piece of cedar wood. The children of the road have come up with some great names for our guardian of the garden: Freddie, Dexter and Sherly.... 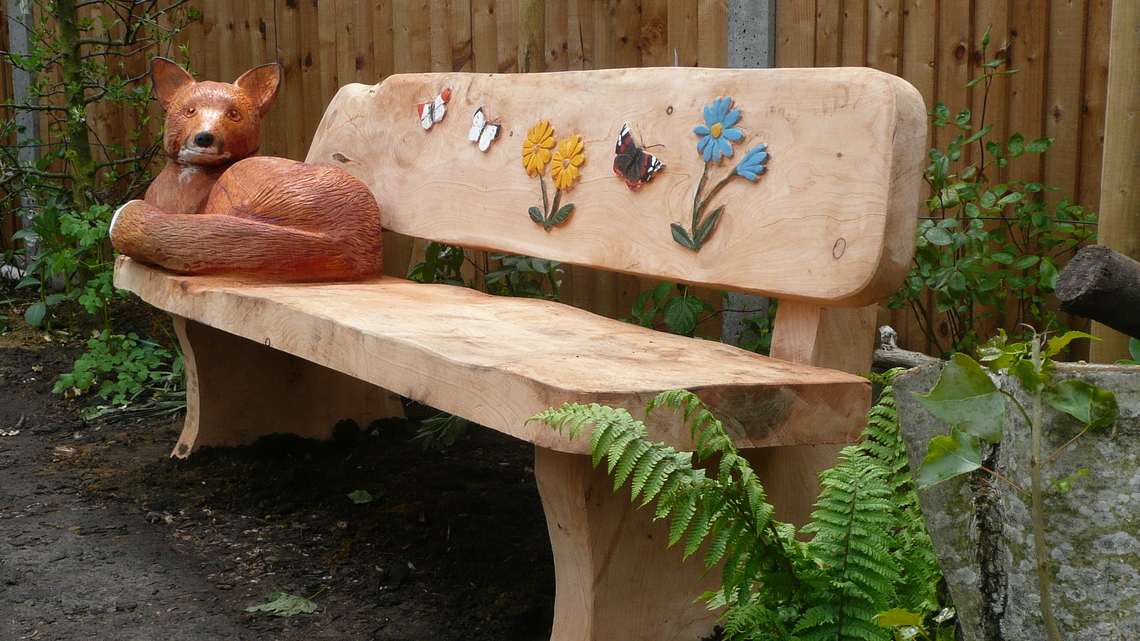 Other examples of Paul's creative work can be seen locally in the Crane Park / Meadway area and other areas of the Borough.

Spring bulbs pushing their way through the earth to form a carpet of crocus, snowdrops and daffodils... 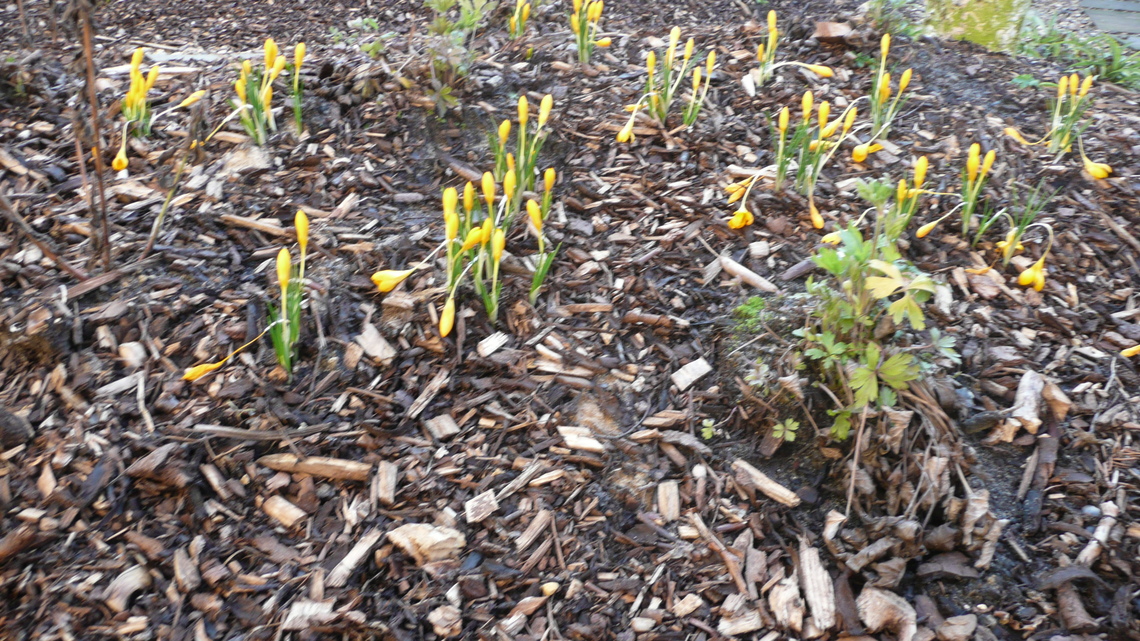