History to the Garden

When I first moved into Sherland Road, Twickenham in 1991, the Council owned garages opposite my house looked rather bleak and cars regularly parked up on the paved area in front of them.

The Council decided to stop this practice by installing very ugly black bollards, with luminescent stickers on the top. People kept reversing into them so they were at odd angles and the area looked quite a mess. The Council agreed to my request to plant four trees in front of the garages to soften the look and improve the environment for the local community. From an early age, my son took an interest in this area and helped to plant bulbs and small plants around the trees. Because the planting area was so small, it was difficult to get much to grow, but we persevered and residents would often comment on how much nicer the area looked.

Some years later, I contacted the Council again and asked if they would consider enlarging the planting area around the trees. About this time, the Council was running a “Civic Pride” initiative whereby they would match any funding raised by residents for community projects. My son and I distributed a note to every resident in the road asking if they would support our idea of further planting. The response was fantastic. We formed "The Friends of Sherland Road" , secured some funding and bought plants, shrubs, bulbs and soil.

Because of this little patch of green, residents who might otherwise have met came to know each other. We also began entering environmental competitions and won:

My son also won a number of environmental awards for his contribution to the area, including Borough in Bloom, Young Gardener of the Year in 2008.

Very little was done in the way of maintenance by Richmond Housing Partnership or the Council, so when the Police started a “Community Payback” initiative, I applied and the rusting garage doors were painted blue. The Council refused to remove the black posts but by keeping the area nice and well kept, my son and I ensured it was free of litter, fly tipping and we never had a problem with graffiti or anti social behaviour.

On his own initiative, my son created wildlife habitats and wildflower garden and added a small pond to the wildlife garden and rather artistically, created urban sculptures from spare slabs and the struts from an old wooden planter.

The four trees added an attractive canopy and provided a safe site for the four permanent feeders, which attracted a wide variety of birds – from parakeets and collard doves to pied wagtails and chaffinches and bats were summer visitors.  The area continually evolved and many different and interesting wild flowers and plants could be seen throughout the seasons. 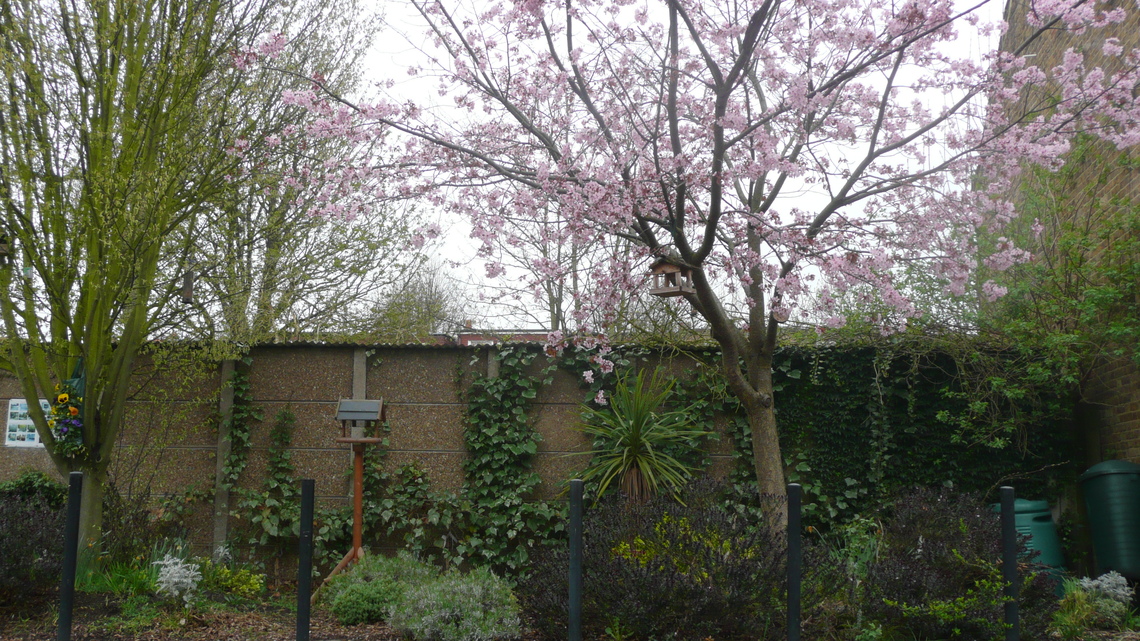 Part of the original garden in Spring

As detailed in the history of Sherland Road, this land was included in the land sold off for development but we never gave up hope.  It wasn't easy and at times I felt like giving up, but with the support of Sherland Road residents and other members of the community and after much negotiation and many hurdles to jump, we now fortunate to have an even larger community garden, which as a Residents' Association, we are officially licenced to manage.

The three houses took over a year to build and during that time, I got to know resident Mark Suzenberg, who is a qualified landscape architect and we began to develop and share ideas for the garden, which we then put to residents. We both independently had the idea of a pathway, to take people on a “journey” around the garden and two interlocking circles added extra interest. Mark came up with the idea of a woodland garden, planted with a wide range of plants and bulbs. We wanted the garden to provide interest through the seasons and to continually evolve and also to involve the community as much as possible and incorporate their ideas.

Plans went backwards and forwards to Richmond Council and after what seemed like an eternity, planning permission was finally granted and work began on our new garden on 8th October 2012.

It is wonderful to once again have the opportunity to restore the flora and fauna to Sherland Road.

We believe it is extremely important to create green spaces wherever possible and encourage biodiversity and we hope that our new garden will inspire other communities, no matter how small the space is, to create a little patch of green.

Quote from The Conservation Foundation: “The capital’s unsung gardening heroes who make the capital a brighter, greener and healthier place to live and work and also improve the biodiversity”

(c) Julie Hill 2013.  No text or images can be reproduced without permission