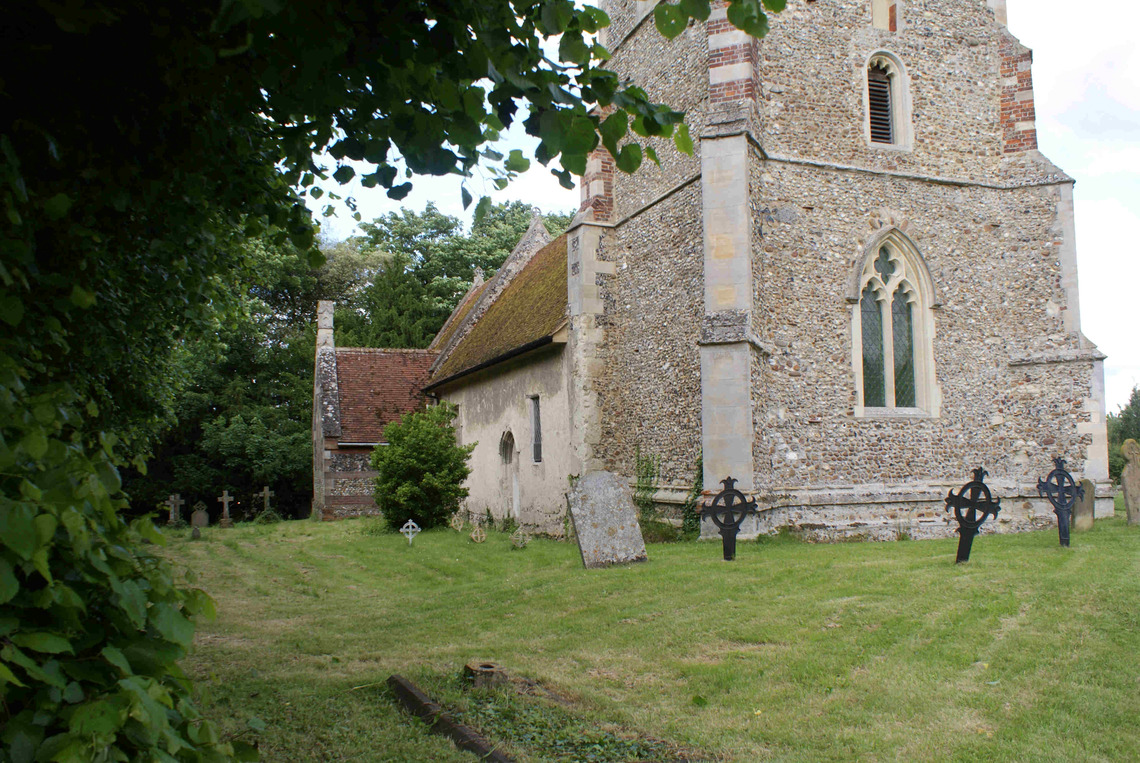 The church is of 12th century origin and situated in an area of outstanding beauty on the Essex Suffolk border.  It has an interesting history with some distinguished Rectors, the most notable being Matthew Parker.  He was rector from 1542 until 1544.  He was appointed chaplain to Anne Boleyn in 1533 and after her execution, to King Henry VIII.  He was made Dean of the College of Stoke by Clare in 1535, a post he retained until 1547.  He was Master of Corpus Christi from 1544 to 1553.  He was appointed Arch Bishop of Canterbury by Elizabeth I in 1559.

The porch of this beautiful Church was built circa 1610 and has seen the entrance of countless numbers of members of the congregation over the past centuries.  Inside the porch the oak entrance door to the Church is of considerable interest, having been installed circa 1380.  The strap hinges on the outside of the door with their much worn foliated leaf shaped ends suggest that the door may date from 1320.  The door is held together with wooden pegs.  Note the enormous wooden stock lock, date circa 1610, which has been recently restored and three new keys made.  Until 1927 the outside of this door was used as a notice board, hence the nails that are in it.  Many have been extracted.

The inside of the door had received many coats of limewash, it took three months to remove these and expose the oak again.  Inside the Church on the left of the Nave towards the tower are four of the original oak cow pews installed circa 1410.  Until 1795 probably all the Church was similarly benched, at that time new deal horse box pews were installed and an unventilated floor was laid.  Dry rot set in and the pews and floor became so unsafe that in 1927 a new ventilated floor was laid and new oak pews installed as existing.  The window above the old cow pews dates from 1390, as does the window on the north side of the Nave towards the oak pulpit.  The walls of the Nave appear to lean and are known as Batter walls.  The Nave roof dates from circa 1390.  The tower arch leading from the Nave also dates from 1390. The west tower, with diagonal buttresses and battlements, was added about 1400.  The Belfry houses two of the earliest bells in England named Alicia and Thomas which were case c. 1330 by Thomas de Lenne.  The third “tower” bell was cast in 1450 by Henry Jordan of London.   Running up the outside of the tower is a polygonal red brick turret which contains the steps to the top of the tower – date 1520.  Inside the Church under the tower on the south wall is a very old oak door held together by hand forged nails which leads to the stairs in the turret.  The tower and turret were the subject of a major renovation in 1934 and 1989.

In 1857 the Norman Apse and Chancel being in a ruinous condition were pulled down instead of being well restored and the present Chancel and Vestry were built.  At that time the Nave was extended by 2 or 3 feet.  In 1986 the Chancel and Vestry roofs were restored. The nave roof was restored in 1999 and the nave ceiling in 2006. The two brasses c. 1440, which lie in the aisle towards the east end of the Nave, covered for protection by the carpet, are believed to be of John le Hunt and his Wife Frances Toppesfield.  In the new Chancel on the south wall are two monuments the first to Dorothy Byatt who died in 1752 whose Daughter Dorothy was married to John Piper.  The second is to Dr Stephen Piper a distinguished military gentleman who died in 1722 and resided in Ashen House, having no offspring, left his entire estate to his nephew, the  John Piper. Incidentally it may well be that Doctors Lane which leads down to Ashen House was named after Dr Piper. The Byatt/Piper Vault can be found in the Churchyard to the south of the west tower.

The three stained glass windows in the south side of the Chancel commemorate Rear Admiral George Hills, of Ashen Hall, his wife Diana who died in 1854 and Daughter Harriet Maria who died aged 23 in 1845 of typhus fever.  Admiral Hills, who embarked on his Naval career in 1792 as a Captain’s servant, was to serve with distinction in 10 ships in the American, Mediterranean, Irish and Home stations before his death in 1852.  The Victorians re-erected the monument to Luce Tallakarne on the north wall of the Nave, having demolished it’s original site in Old Chancel.  This prominent site, facing the entrance to the Church, was perhaps an acknowledgement of the importance accorded to it’s antiquity and unusual sculpture.  The monument is a tribute to a respected Wife and Mother, Luce Tallakarne, who was the eldest Daughter of Thomas Cotton of Connington, married John Tallakarne of Ashen House and was the mother of his seven children.  John Tallakarne may have moved from Ashen House following his wife’s death in 1610 as his own burial took place in Helion Bumsted in 1627.  He had been slain in battle while serving as a Captain in the expedition to the Isle of Ree in the time of King Charles I.  Pevsner noted the monument for it’s termini caryatids, decorations, shield and inscription plate, but time had taken its toll on the soft stonework.  The text had faded and the original pinnacles are missing however thanks to the generosity of various trusts the monument was restored in 2002 to its original beauty and conserved for future generations.  Beneath the monument is an ancient piece of oak inscribed “This has bin the churching the mearring stoole and so it shall be still 1620”.  It was probably attached to one of the ancient pews.  The recess in the north wall marks where the north door was – date circa 1660.  It was probably built up owing to the ancient superstition that devils lurk outside the north wall of the Church.  The font was originally beautifully carved.  The top dates from circa 1390.  All this beautiful carving was cut off between 1649 and 1660 and the base smashed to pieces and buried.  In 1857 when excavations were made in the Churchyard the broken pieces were discovered and reburied.  The new oak choir stall sin the Chancel were dedicated in October 1934 by the Bishop of Chelmsford.  Owing to the great fire of London and the destruction of St. Paul’s Cathedral many records were destroyed, hence the original dedication of this Church was lost.  It was rededicated to Saint Augustine of Canterbury in 1858.  The Duchy of Lancaster’s coat of arms shows that the patronage of this living is in the Duchy’s gift.

The Church has required great upkeep and maintenance including in recent years reroofing the nave and chancel, repairing the tower, replastering the nave ceiling, restoring the west and south windows and repairing the east window.  All are welcome to join in our services.

The current church wardens are:

For our our approved data privacy notice  please apply to either of the churchwardens.