In St Wilfred's Church,Pevensey Bay, you will see a plaque:

Percy Grainger is now  mainly remembered for 'Country Gardens'. His 1918 arrangement of this English Morris Dance is still well-known. (It has even been performed by the Muppets.) Other original short works - such as Handel in the Strand - sometimes feature on Classic FM.

But in his day, Percy was astonishingly successful. In 1920's America, his flamboyant piano performances could command $5000 per concert, an immense sum at that time. The crowds loved him (and especially his renditions of 'Country Gardens', which he quickly grew to loathe.) When Ella and Percy married in 1928, their wedding ceremony was at the Hollywood Bowl – in front of an estimated audience of 20,000.

There was much more to Grainger than celebrity and popular tunes. He felt from early on that western music was too rigidly constrained. He was one of the first collectors to record folk-singers, using a phonograph. He visited the Maori of New Zealand to listen to their music. He invented music syntheisizers and introduced new instruments to the orchestra.

With other modern composers, he tried to free composition from classical forms. He explained to his fellow composer, Balfour Gardiner, that he wanted a Free Music, with 'curving tone-lines...like the curving shapes of clouds'. (1)That was in June 1936, on a walk from Pevensey Bay to Herstmonceux Castle

He was in this part of Sussex  for a simple reason.

In 1926, on a luxury liner travelling from Australia back to America, he had encountered Ella Ström . She was obviously a captivating woman, originally from Sweden – and Percy approved of Nordic people.  After a remarkable early life, she had settled here with her daughter, in Seaville Drive. The "workman's cottage" she lived in was called "Lilla Vran". It had a distinctive mixture of pebble-dash and traditional Sussex flints.

So, in 1927, Percy made his way to a truly romantic spot: “At about midnight we reached Pevensey and Westham railway station – a pitch-black night - & stood waiting quite a time while a taxi was brought to life by some friendly man at the station. I would have been well pleased to stand there waiting with [Ella] all night.” (2)

Percy then checked into the Bay Hotel (to preserve Ella's reputation) and visited her in Seaville Drive during the day. Ella and Percy were married in 1928; they moved to America, but were regular summer residents of Pevensey Bay. They were joined over the years by a number of musicians, including Percy's fellow students from the “Frankfurt Group” of composers.

In the war years, they let t

But he had at least one good memory. In 1953, he could look back on Pevensey Bay as a place where he had been 'blissfully and innocently happy.”(3)heir house to Cyril Scott, a composer once admired by Ravel and Debussy, and subsequently forgotten. (He is buried in Saint Nicholas churchyard.) Percy Grainger also felt - in his later years - that his originality had been overlooked. His personal eccentricities and his light classics were known, but his musical innovations were disregarded. 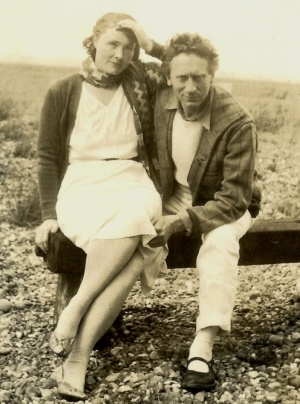