In December 1803 His Majesty's 88th Regiment of Foot arrived in Westham. Many regiments stayed in the Pevensey Barracks, and most of their details are lost. But in this case we can trace some of the individual soldiers, thanks to a surviving medical logbook.

The 88th had recently returned from India and Egypt, severely depleted by sickness, and was sent to recover and rebuild in Sussex for three years. From Pevensey they moved on to Eastbourne and Hastings. They were a very physical outfit. In Eastbourne in 1805, they became involved a violent fracas with the Derby Militia. Strangely, the outcome of this was they found 200 extra recruits. The Militia were so impressed with the them that many of the Derby men joined the 88th.

Better known  as the Connaught Rangers,this was “the most Irish of Irish regiments”, and its soldiers soon earned a fearsome reputation as shock troops and street-fighters. General Picton could send them into battle with unloaded weapons: “Rangers of Connaught - it is not my intention to expend any powder this evening. We'll do this business with the cold iron.” 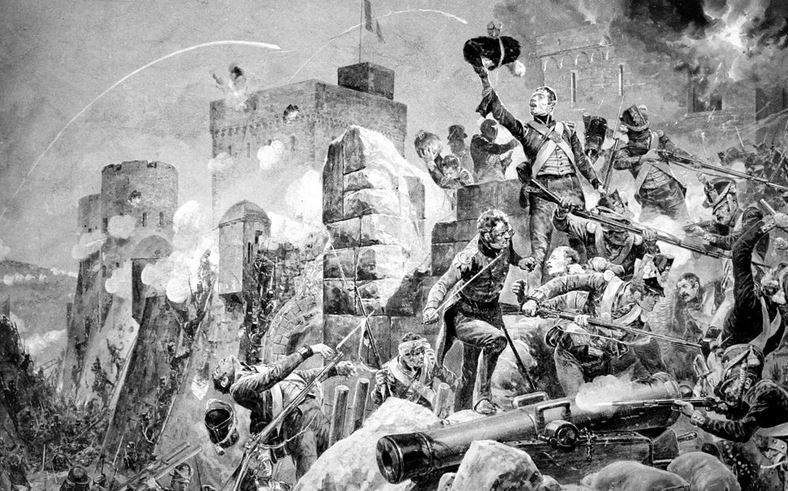 They left Sussex for a spell in South America, then in 1809 they  landed in Lisbon to join Wellington's army and establish their place in military history. Their battle honours are almost a history of the Peninsula War: Talavera, Badajoz, Ciudad Rodrigo, Salamanca . . .the list goes on, and will be well known to any reader of the Sharpe novels. Wellington himself called them “that most astonishing infantry.” They provided the 'forlorn hope' at Ciudad Rodrigo, and they were critical in the heroic close-quarter fighting when Badajoz was taken.

But some of them were implicated in the chaotic savagery that followed the fall of Badajoz. Even in normal times, they had a reputation for plundering. General Picton called them the “Devil's Own” and it was not an affectionate name. He also called them the “Connaught Footpads”.


As to the men living in the Pevensey Barracks, there are few records. One name that stands out is that of Captain Richard Vandeleur. He came from an Anglo-Irish family with a long military reputation: “a classic Irish Junker”(1). (His brother's descendant, JOE Vandeleur led the break-out in Operation Market Garden and was played by Michael Caine in “A Bridge Too Far”.).

We encounter this Captain Richard Vandeleur's Company in Pevensey Barracks, and there is a newspaper report of him socializing in Eastbourne. Made up to Major in 1804, we find him at a ball at the Lamb Inn. The ball was graced by the presence of a Miss F. Vidler, who danced with great elegance and very precise footwork,and the dancing continued almost until daybreak. Richard Vandeleur went on the become commander of the regiment, but fell ill and died at Campo Mayo in Portugal in October 1809.

The other ranks are not always remembered by history, but we can name some of the Rangers. Their officers contributed to a special medal for the Peninsular War veterans. This was presented in 1819. From the list we can identify three soldiers,  Privates John Croucher,  Pat Curran and George Taplin, who all received their first class medals for having taken part in twelve “general actions”. Between them they must have fought in most of the battles of the Peninsula campaign.

And, astonishing enough, we know what a Private John Croucher and Pat Curran were doing in Pevensey in February 1804. Like many of their comrades, they had fallen ill. They had the kind of illness you might expect, if you sleep in wooden huts next to Peelings Lane.

Some of their comrades still had the opthalmia  which had blighted their service in Egypt. And there were  instances of the various other illnesses and diseases of the kind that soldiers might pick up.Of our three men, George Taplin's condition is a little less obvious. He is not given an individual diagnosis, but seems to be part of the group in the hospital for “Punit” or “Punito”. This is probably treatment for wounds after a flogging, and treatment was a usually simple ointment. For some reason, the mens' backs were taking a long time to heal in Pevensey.

We know this because of an old log-book held at the University of Aberdeen. It is in the papers of Sir James McGrigor, and is titled The Admission Book for the Regimental Hospital of HM's 88th Regiment of Foot, Vol III, 9th March 1800 to 16th Feb 1804. His case books are also held there. McGrigor was a Scottish surgeon who has been credited with founding the Royal Army Medical Corps. He joined the  88th in 1793 and became Wellington's Surgeon-General.


Wives and Children
During their years in the Peninsula, many of the Connaught Rangers acquired Spanish or Portuguese wives. When the regiment was sent back to England in 1814, these wives were all abandoned.


The presence of such soldiers' wives may account for an odd feature of the Westham birth records. In the early nineteenth century, we are told, baptisms at St Mary's Westham included: Patrick O'Brien, Michael O'Brien, Biddy McCarthy and Bridget Devine (2). These are not traditional Sussex names, and must hold an interesting history.

OS Map: First Series 1813, "This work is based on data provided through www.VisionofBritain.org.uk and uses historical material which is copyright of the Great Britain Historical GIS Project and the University of Portsmouth".

References:  (1)  Bowen and Bowen "Heroic Option: the Irish in the British Army"  (2) The Times Nov 12 1936 includes names from the parish register; generally, see Grattan, Adventures with the Connaught Rangers, 1847;. For a fully referenced version, contact us here.