As Phil has described earlier we meet most months to have an evening or afternoon get together and to raise money for the annual twinning trip. Each event typically costs between £5 and £10 per head, which includes the food and entertainment, so it is a fairly inexpensive way to have a lot of fun.

Around half of the monies raised goes into the 'fund' which pays for all the major items of expense when our friends from Plouescat visit us.This visit happened at the end of May 2019, and a brilliant time was had by all as this very short clip shows

Thursday 30th May: Visit to Tiverton area with barge trip on Tiverton Canal. Followed by the Twinning Party Night at Isaac Hall, Braunton Academy featuring the 8 piece 'Rubber Band' who played all kinds of music, including Devon and Breton numbers which were a real hit.  Our Plouescat friends particularly loved the mobile fish and chip van and the Hockings ice cream which arrived mid way through the evening. .

Friday 31st May: Boules at the Braunton piste, where Braunton was whitewashed by a very strong Breton performance. This was  followed by a buffet lunch/civic reception at the Parish Hall, then on to the cricket club for the 2019 Twinning Challenge where we got our own back for the boules disaster with a narrow win in the skittles challenge. There were also impromptu games of darts and pool, plus the chance to drink biere Anglais. In the evening the Official Twinning dinner and dancing at Park Hotel in Barnstaple nicely rounded off a packed day.

Saturday 1st June: Free day with hosts. The weather was lovely and many people headed to the coast and beaches. This was followed by informal dinners in small groups of 15 to 20 people which went on till the early hours. The entente cordiale was affirmed with a glass or three of vin plus armagnac, whisk(e)y and calvados as required.

Sunday 2nd June: We bade farewell to our friends mid morning as they departed on their coach to visit South Devon for the day before boarding the Armorique for the overnight ferry to Roscoff. This year (2020) we get the chance to do it all again when we visit Plouescat. This will be between Wednesday 20th May and Sunday 24th May  If you would like to join in then please let us know !

March/April 2020 - A return of the popular skittles evening at the Black Horse. Details to follow.

(Note this is a date change, it is no longer 26th March.)

Over the past few months we have run several very successful events in support of twinning, please see below:

Saturday 14th December: Christmas Do, aka Pat's Posh Party. At Pat & Terry's with a Casino - well I missed this one, which was a shame as it was a brilliant evening by all accounts !

Thursday 14th November: Autumn Quiz night at Braunton Cricket Club. A good time and some very hard questions ! The raffle was really well supported and over £200 raised for funds.

Just before the clocks went back on 27th October 24 brave souls went round to Anne & Andy's for an early evening buffet and a chance to try out their skills on some traditional pub games There was bagatelle, shove hapenny, jenga, bar billiards, and table tennis plus plenty of food and drink. Some old skills were reignited and several new ones learnt at a really fun evening.

Sunday 25th August: Boules followed by Tea + Buns at Jan & John's was well supported and greatly enjoyed by all

Saturday 10th August: Maggie and Colin Ford opened up their home and garden (with swimming pool) for a quiche, salad, and summer puddings supper - it was a great success, although on quite a cool evening...... so the pool remained unrippled !

Saturday 6th July - Alternative Christmas. 28 people couldn't wait for Christmas Santa this year so he was booked in for a great evening hosted progressively by Pat/Terry, Janice/Richard and Eddie/Sylvie. Here is the evidence ! 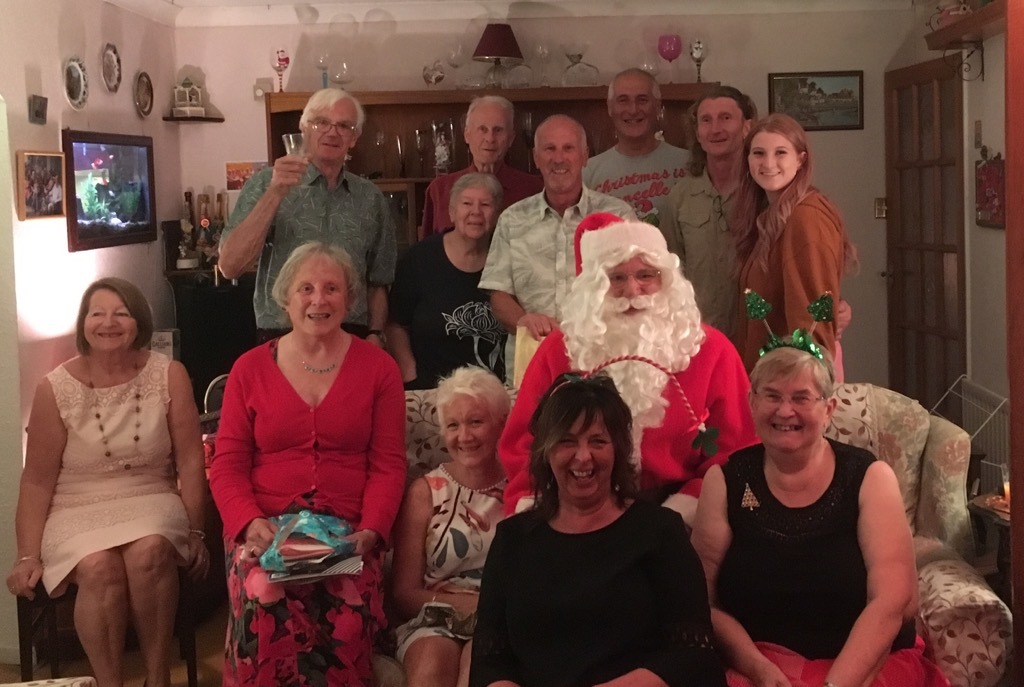 Santa with his elves and helpers at the Christmas in Summer festivity on 6th July !

The Quiz night was held early April at Braunton Cricket Club. Mike Plowman was the question master and produced a super quiz. The teams of 4 found several categories very tricky, especially the marathon Oscar round. Scoring improved after another trip to the bar, and we all had a great night raising nearly £180 toward funds and putting a good amount of money behind the cricket club bar.

March saw the French Themed Night at Val & John's (with  optional French dress). This was a great success with a delicious bouef bourgignon as the star attraction. There were plenty of Breton/French characters, many of whom accessorised with Roscoff onions !

Back in February there was a skittles 'training' evening at the Black Horse pub in Braunton where 18 of us enjoyed their new alley together with snacks and drinks. This served as a handy warm up for the forthcoming Twinning Challenge! 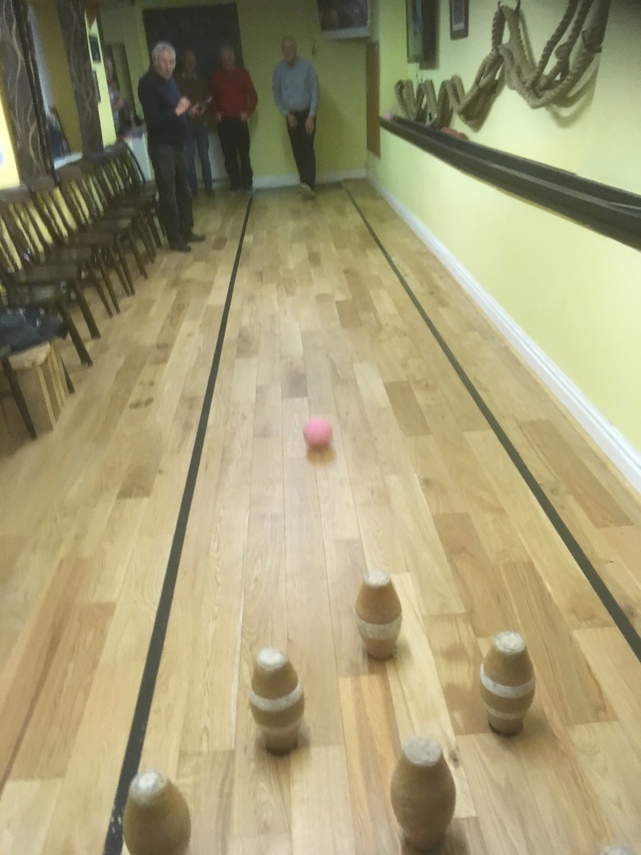 Phil on his way to a monumental skittle score ......

A week later we all finally buried the January diets with a pudding party round at Phil & Julia's. The theme was European and featured amongst others Black Forest Gateau, Baklava, Creme Caramel, Breton Farz, Rice Pudding, English and French Cheeses etc, etc. 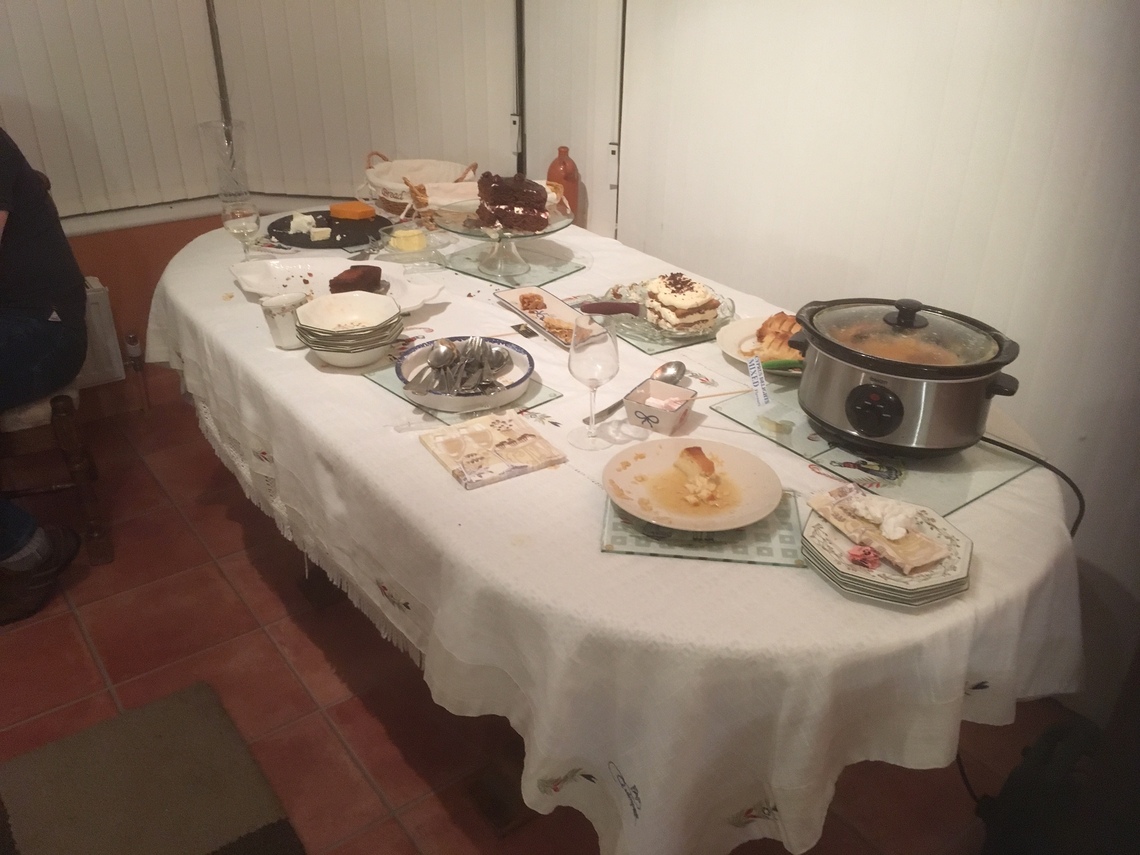 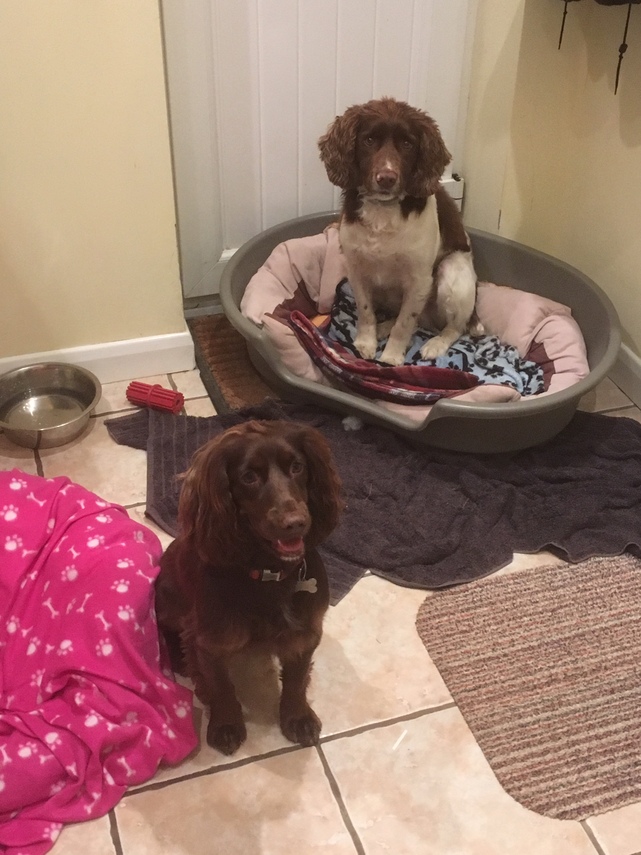