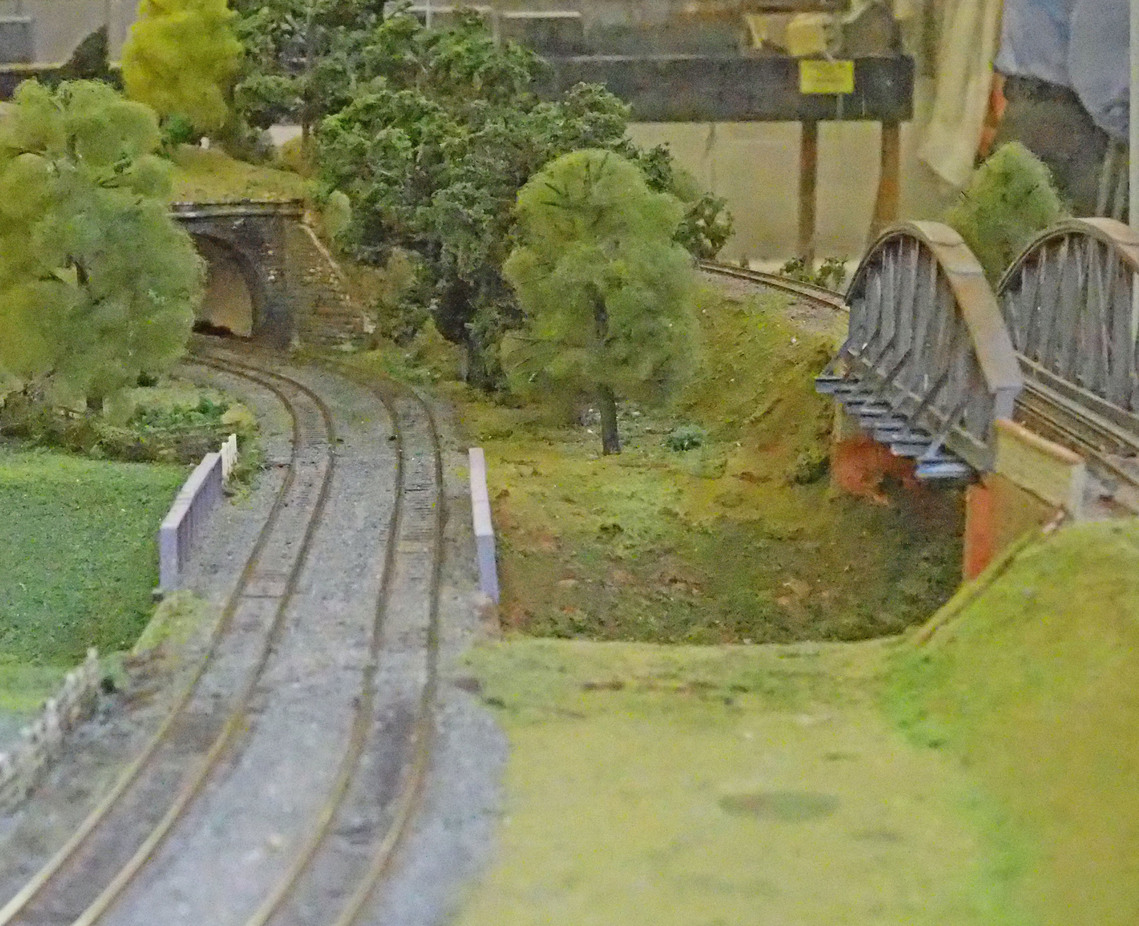 History
This layout was started many years ago and has gradually evolved. Bernard and JohnB had done most of the original wiring, Roger had built the Control Panel for the station area, and Geoff had installed the station platforms. But members were keen for improvements both to the running quality and the layout of sidings and routing.
It was decided at a special meeting that this layout would no longer be considered for exhibition. It is very large and would need substantial transport to shift it - we just don't have those resources nowadays. So the focus changed to creating a club layout that was able to be used for running sessions for either a minimum or a lot of members. The eventual aim is to be able to offer both analogue and DCC control, even simultaneously - by splitting the track layout into separate power zones.

Changes
The first change was to rebuild the fiddle yard into a 19 road set of storage sidings. The old fiddle yard was completely rebuilt with new wider baseboards, which hinge upwards for maintenance. MikeB built a new control panel for this with some semi-automatic control, and sensors showing the state of each siding. Loading and unloading lines were added so during busy running sessions there is room for members to add and remove stock without tripping over each other!

Attention then turned to the lift-up flap at one end of the layout. This had been a source of annoyance as it was often difficult to close, and was quite narrow, restricting who could come into the middle area of the baseboards. Malcolm came up with a hinging mechanism that lifted the flap clear of the surrounding scenery, so small trees and so on could be installed without having their tops knocked off by the lift-up flap!

It then was agreed the same treatment of new baseboards and new track would be applied to the station area. It was a hard decision to scrap what members had got used to, but faults were starting to show up and there were some issues with flexibility of operation when a lot of members came for a running session.

The station is rebuilt
Geoff and Malcolm made up the new baseboards on generally the same principles as the storage sidings; they are wider than the originals and hinged on their long side for maintenance access. The baseboard at one end of the station has had a dropped section built in to it to create some contours to the otherwise flat boards. A road winds its way down and under the approach loop into the goods yard area and up to the back of the station building.

The goods yard it passes was the original and has been given an expanded layout, making use of a corner board added across the inner curve at this end of the station. It is called the 'West Yard' and is mainly a coal delivery area.

At the other end of the station another board has been added across the inner curve, this is the East Yard. JohnB has built a cattle dock, timber store and refurbished the goods shed. It is suitable for mixed forms of freight traffic - this should give us scope for some varied shunting moves.

MikeB has planned two control panels similar in style to that of the storage sidings, one will control the Goods Yard and the Inner mainline, and the other the outer mainlaine and all of the Branch. They have to have some electronics to be able to switch one of 4 controllers to each section depending on the route over that track. Some automation based on point positions that will avoid having to manually switch which controller goes to which section.

Some time ago Fred and Bill built the embankment for the Branch section and the tunnel into its own fiddle yard, which sits above part of the storage sidings. With Gerry, Fred completed the scenic entry into the fiddle yard.  Some buildings are recycled from the previous layout, other buildings are a mixture of kits and scratch built.  Dennis built a magnificent row of cottages sited near the West Yard. Scenery has been added to the dropped baseboard section, Geoff has built an excellent bridge over the approach road to the station and has built coal staithes for thew West Yard.

Platforms for the main station area were made up of mdf and wood blocks, with brick papers applied to the edges. They have had fine sand added to represent a stone surface and Geoff is adding paving slabs to the edges of the platform surfaces. Meantime he has strengthened John's station buildings so they sit well on the platform surface. He did this by adding a 'base plate' to the building. He has left holes in this base so we can install lighting at a later date.

The road that wanders up from the west side has been extended across the goods arrival loop line so vehicles can access the East Yard.

At various points on the station area fencing is going in. John plants the posts and Peter threads the fishing wire!

MikeB has completed two fixed distant signals for the branch line - one sits on a platform built onto the embankment. Other signals are planned. Tim has been gradually adding buffer stops to the ends of all the sidings, a pleasing array of different styles.