Heritage Trees in Much Wenlock

Tree Heritage in Much Wenlock

Some few years ago when we were attempting to lessen the compaction of the ground around these lime trees (and I am pleased to say that today fewer cars are allowed to drive over their roots), the longevity of these trees came up for discussion. How long does a lime tree live ? Can we extend their lives ?

You may remember Professor Donald Pigott who visited the town in 2010 to have a look at the lime avenue and give a talk about lime trees in the Guildhall on the same evening. Professor Pigott is the international expert on lime trees and, since his visit, has published the authoritative book on limes, “Lime-trees and Basswoods”. It is to this book that we must turn to seek answers to the above questions. In it, he mentions small-leaved limes in Central Europe that lived for 300 to 350 years. He also mentions many limes that are much older that these. In Lithuania, for example, he describes a small-leaved lime which, upon its death, allowed its rings to be counted. This was a tree of 8.2 metres in girth and it was found to be 815 years old ! He also describes a tree at Hessen in Germany “where a stone of unknown date …...giving an age now of 1240 years, which is not impossible.” But these figures are only possible if the trees are looked after well and have undergone pollarding or coppicing. If the Linden Avenue trees were pollarded on a regular cycle, their lives could be extended indefinitely. There are Lime trees on Wenlock Edge, as I have said before, that were planted by the monks of the Abbey and this order was dissolved in 1540. They were likely to have been planted before then, so even these are nearly 500 years old. They had been pollarded on a regular cycle and it is this that has kept them alive. The Linden Avenue trees, planted in October 1869 are, therefore, mere youngsters at 148 years of age. Perhaps we should have a mini-celebration in two years time when they are 150 !

Now we do realise that regular pollarding costs money and the more trees to be treated in such a way, the higher the cost. We also realise that to pollard some trees in an avenue and not others would spoil the appearance and integrity of the avenue. But it would be perfectly possible to pollard one side of an avenue one year and leave the other side for, say, another 4 or 5 years in order to re-accumulate funds.

What is true, however, is that unpollarded, not only will the trees reach the ends of their lives more quickly, they will also become a hazard with the snapping out of high branches in strong winds. And what is also true is that once pollarded, a tree must continue to be pollarded on a cycle, because new limbs growing from a pollard head are not integrated into the main stem of a tree as well as side branches on an untouched tree. Eventually, if the pollarding is lapsed, the “new” branches thicken and break out becoming even more of a hazard. Obviously something to think about.

We must now report that the GRGOG has decided to shelve the planting plans for 2014 and 2015 indefinately.

The Much Wenlock Tree Forum (MWTF) is pleased to respond to the request from the Gaskell Recreation Ground Operational Group (GRGOG) to propose a Planting Plan for the future wellbeing of the natural environment and bio diversity of the Gaskell Ground.

The Gaskell Ground is a multi use site with sometimes competing interests, it is a sports field and also a recreation ground for walking and informal play, including a children’s playground.

The MWTF has thought carefully on the subject of future planting and has determined that whilst there is some scope for planting for the future, in the main we believe that new planting should be kept to a minimum in order not to interfere with the long term use of the ground as a sports field.

We have listed below the where we believe new trees would be of benefit, we have also marked the approximate locations on the accompanying map by number.

Location 1. Species to be agreed possibly small decorative Acer or Poplar as a larger species. A planting here would complete the ‘green’ surround of the children’s playground and mark a boundary.

Location 2.   Four Swamp Cypress trees to fill the gap in the central row of trees planted in the ditch. This has been a long standing proposal, but will be shelved for the time being until research into the drainage problems on the ground are completed

Location 3. Replacement oak tree for the felled King of Greece commemorative tree. The felled tree was protected so there is a legal obligation replace this tree. We are pleased that this tree has now been replaced at the expense of the Much Wenlock Olympian Society

Location 4. Replacement for dying sweet chestnut tree. This tree is likely to fail within one or two seasons, it is a protected so there is a legal obligation to replace this tree. We suggest a fastigiated evergreen, probably a Golden Irish Yew or Juniper, such a species would not interfere with the up keep of the bowling green.

Location 5. This is a new proposal in which funding will be sought to create a newly cleared and planted area which will commemorate the Olympian Legacy of Dr William Penny Brookes. The foliage for this planting will be in bronze, silver and gold. 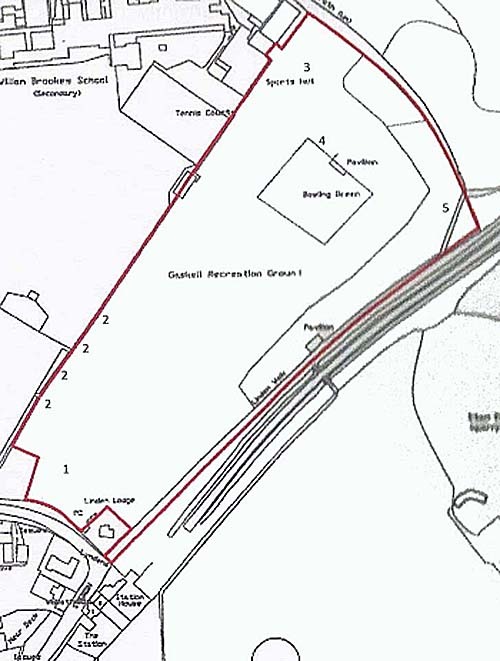 There has been no further new planting on the Gaskell Ground, the mature sweet chestnut adjacent to the Bowling Green has been stripped of all branches, its trunk remains standing. It may regenerate but is more likely to slowly decompose and die  to become  habitat.

As well as leaving the world a legacy with his big sporting idea, William Penny Brookes also left his town of Much Wenlock an arboreal legacy which, with a little bit of care, will endure for hundreds of years.

Brookes, the local doctor and philanthropist who helped inspire the modern Olympic Games, was also an energetic tree planter, and the medieval town boasts dozens of trees directly or indirectly connected with him.

Often planted to commemorate a person or event, each has its own story and own significance. Many are associated with the town’s Olympian Games which Brookes famously founded in 1850 and are in and around the traditional venue in the Gaskell Recreation Ground.

They are being showcased in a new booklet based on extensive research by John Tuer of Much Wenlock Tree Forum. It includes two tree trails so that visitors and townsfolk can discover and appreciate this part of Wenlock’s heritage.

Finding out about the trees has involved a lot of detective work. Some have simply disappeared, with others it’s difficult to work out which ones they are, and for some their origins are conjectural.

Those planted on the left hand side – the side of the games field – and continuing along the boundary with Windmill Hill, were planted by Brookes and his friends on October 30, 1869.

“There were 42 of them, and there are still 42, healthy and vigorous trees.”

Mr Tuer thinks the slightly older limes on the right hand side of the avenue were probably planted by the railway company to delineate the boundary of its land.

Among Wenlock’s ‘mystery trees’ are a line of seven western red cedars to the left of Linden Avenue – a gap reveals where the missing eighth would have been.

“The records of when they were planted have been lost. I have had authorities look at them. We think they were planted post-World War Two. My assumption, rightly or wrongly, was they were possibly planted in 1950 to commemorate the 100 years of the first Olympian Games.”

Looking across the field there stands a tall, lone, Wellingtonia, arguably the most iconic and historically significant of all the trees.

It was planted with great ceremony in 1872 at what was then the south western corner of the Olympian field – it expanded later – in honour of Brookes, who was of course present, and was dubbed ‘Brookes’ tree’.

Among other trees were a 30ft oak, planted to mark the golden jubilee of the reign of Queen Victoria, at the northern end of the Linden Field (as the recreation ground is also known). As had become the tradition, champagne was ceremonially poured on the newly-planted tree.

Another was a Golden English Oak planted on October 22, 1890, by Baron Pierre de Coubertin, during his visit to see the Wenlock Olympics.

Coubertin was to found the modern Olympics six years later. Mr Tuer says this tree remains healthy but has reverted to being an ordinary English Oak.

After Brookes died in 1895 it was, he says, not until 1977 that there was any further significant tree planting recorded. However, the Olympic tree-planting tradition remains strong, and among the modern additions is a Lucombe Oak planted by Juan Antonio Samaranch, president of the International Olympic Committee, during a 1994 visit.

Looked after, the various trees have many years of natural life left.

“We have some very important trees in Much Wenlock which we ought to try to protect,”