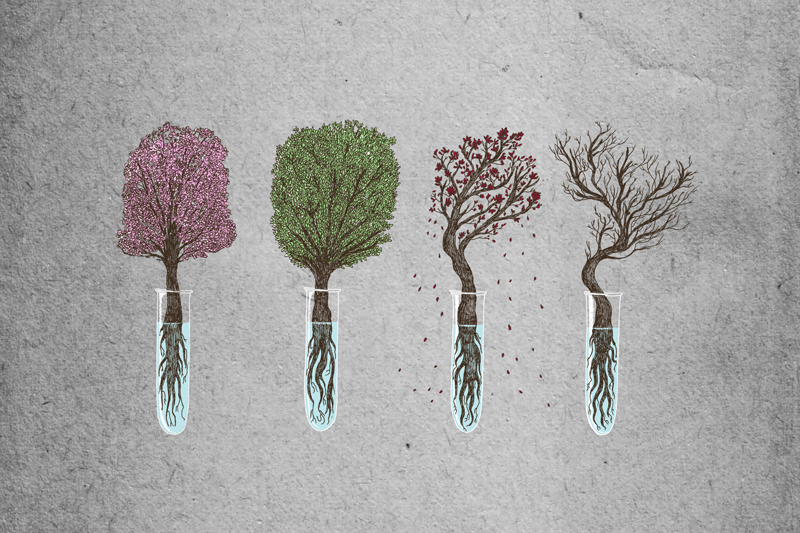 At our last Tree Forum meeting, it was decided to let you know about the new tree diseases that appear to be causing concern in this country. This is so that you can try to spot them as you're out and about and let the Forestry Commission know when you see them. But, don't worry, we'll look at them one at a time.

Ash Die-back or Chalara fraxinea seems to be high on the agenda at the minute and there are outbreaks of it in Shropshire. The symptoms on ash trees are not hard to identify. The disease is caused by a fungus and infection can lead to dead wood up in the crown, but usually on its periphery. This is why the disease is called "die-back". It looks as if the tree is "dying back" from its branch tips. The leaves, when infected, will become brown and this colouration will continue down their veins and eventually kill off the whole leaf. Bunches of dead leaves can then be seen hanging down in the branches, but don't mistake this from the seed as the ash keys also do this and can look like leaves from a distance. These bunches of brown dead leaves will occur well before autumn, so they cannot be confused with natural autumn colour. Lesions can occur on the trunk, sometimes around dead side shoots and in a diamond-shaped pattern.

I have looked at many hundreds of ash trees over the past season and I have yet to find one with the Chalara fraxinea disease. But we must still be on the alert and the Tree Forum asks you to try to spot any of the above occurrences in ash trees as you travel about. If you do see any instances of this;

There is a consortium of woodland specialists and scientists looking for a long term solution, focussing on understanding the fungus so that resistant strain of ash can be developed. Many more reports are needed for scientists to get a true picture of the spread of the disease and also any possible natural resistance.

Outbreaks of this disease must be notified to the Forestry Commission, who will serve a Statuary Plant Health Notice on the owner, requiring them to remove and destroy affected plants.

The Woodland Trust are also engaged with the fight to save and replace our Ash trees.

They have supplied the images below to help our understanding and diagnosis.

If in any doubt about the health of a local tree you can also contact;

There is some promising news about Ash die back a Forestry Commission study carried out by the John Innes Centre appears to be showing that the fungus responsible (hymenoscyphus fraxineus) is mutating to live alongside host ash trees without killing them. However there is  still cause for concern and the work continues into developing resistent hybrids

I mentioned last time that I would respond to those of you who have been asking about what is happening to our Horse Chestnut trees (Aesculus hippocastanum ).

When the trees come back into leaf this spring, give them a little time for their leaves to open fully and mature, then have a look at these leaves closely. You will see on many of them, brown patches on the leaf edges surrounded by a yellow aureole (a sort of yellow band surrounding the brown). This is Horse Chestnut Leaf Blotch and is a fungus called Guignardia aesculi. This has occurred on our Horse Chestnuts for years and is nothing to worry about. The trees cope with this. They drop their leaves with the fungus each autumn and grow new disease-free leaves each spring. Some people are a little concerned that their trees may look blemished and ask how they can stop this fungus appearing. If you do want to try to get rid of it, collect up the fallen leaves at the end of the season and burn them. The new season's fungus is always derived from that lying on the ground in last year's leaves.

Now, a new pest has arrived from Europe, an insect pest called Cameraria ohridella, and this is causing further damage to Horse Chestnut leaves. This is a leaf miner. This tiny moth lays its eggs on the leaves. These hatch out and burrow under the leaf surfaces to “mine” the sap and tissue within the leaves. The resulting effect on the leaves is brown patches between the veins. So where the leaf blotch appears at the leaf edges, the brown leaf mining can appear from within the leaf and spread outwards. It is not yet known how much damage this insect may cause.

I have seen Horse Chestnut trees with this infection in Shropshire. There are certainly some trees with it around Much Wenlock.

The worst thing that can happen to the trees is that, if the leaves lose much of their green pigment, they will not be able to use the sun, water and carbon dioxide to manufacture the plant foods that they need (through photosynthesis). As a result, if the trees don't die, they will suffer stress that places them at a risk of infection from other sources.

One of these other sources is a killer disease and far more worrying than the above. This is something I have mentioned before, concerning oaks, the fungus called phytophthera. It can kill the trees relatively quickly. Cankers can form on the outer bark and the tree loses copious amounts of sap. Look for these lesions on the bark and sap exudation causing discolouration. Horse Chestnut bleeding canker is a notifiable disease and, if spotted, the Forestry Commission Plant Health Branch should be told at plant.health@forestry.qsi.gov.uk

Other notable fungal pathogens are Phytophthora species on Rhododendron, the wild Rhododendron ponticum is best destroyed if there are important and significant oak trees in the vicinity.

Phytophthora ramorum on beech, red oak and larch. This is particularly virulent and can cause sudden Oak Death.

Other fungal diseases that attack a range of trees include bleeding cankers of fungal origin, often Phytophthora species, and bracket fungi such as Ganoderma adspersum.

If you suspect an outbreak of disease on trees locally, notify the forestry commission immediately; action could save our trees.

Horse Chestnut: Horse Chestnut leaf miner - a small moth, (Cameraria ohridella). This causes late summer browning of the leaves, starting from between the veins and working out to the edge of the leaves. Trees appear poorly but recover and so the presence of the leaf miner is not justification to fell the tree.

Oaks: Acute Oak Decline (AOD) is thought to be the result of infestation by a beetle (Agrilus biguttatus) that causes bleeding of the bark, but may result from a number of combined factors.

The Oak Processionary Moth (Thaumetopoea processionea) is a human irritant because of the poisonous hairs on the caterpillars that can cause skin irritation and asthma. Outbreaks should be reported to the Forestry Commission.

Professional help will be required to recognise all these oak pests.

The Asian longhorn beetle (Anoplophora glabripennis) is a new threat to Ash, Birch, Poplar, Sycamore, Willow and some fruit trees. It bores into the trunks of these trees and severe infestations can be fatal.