The meeting was held in St James's School Hall and was attended by over 90 people. It started at 8:00 pm with a brief introduction by Pat Murphy, Elstead Parish Council Chairman.

Angela Koch, a Consultant from the government funded “Locality" organisation explained what a Neighbourhood Plan is and how to set one up. She described the various stages of the Plan development process from the determination of the area to be included, through investigation of what issues affect Elstead and what solutions need to be considered, to the writing of policies that will give the Parish more control over future development.

A Neighbourhood Plan cannot stop development and it has to work alongside the Waverley Local Plan and within the National Planning Framework but it can be used to influence the future shape of the village. As well as being able to control some aspects of housing and business development it can also be used to promote desirable development, improve services and protect village assets and spaces.

Angela emphasised the need for the development of the Neighbourhood Plan to be an open process, with maximum involvement by the community and close liaison with developers and Waverley Planners. Meetings will be as open as possible and keeping in touch with other parishes that are developing Neighbourhood Plans will be helpful.

The inclusion of the Weyburn and Tanshire House parts of Peper Harow was discussed. The justification is that any development in that area will impact on Elstead infrastructure, facilities and services and it is advisable to deal with these as part of a joint Plan set up by Peper Harow and Elstead Parishes.

Votes were taken on the proposal to develop a Neighbourhood Plan and include part of Peper Harow. The proposals were almost unanimously approved by a show of hands, with one person voting against.

People were asked to record their concerns and ideas about the future of Elstead.

The results and more details about the Elstead and Weyburn Neighbourhood Plan can be found on the ELSTEAD ONLINE website at: www.elstead.info under the menu heading: ELSTEAD AND WEYBURN PLAN.

It is intended that information will also be made available for residents who do not have access to the Internet.

The map shows the Elstead Parish Boundary extended to the East of the village to include part of Peper Harow. This Boundary will be submitted to Waverley Council who will carry out an official six week consultation to check for any objections. 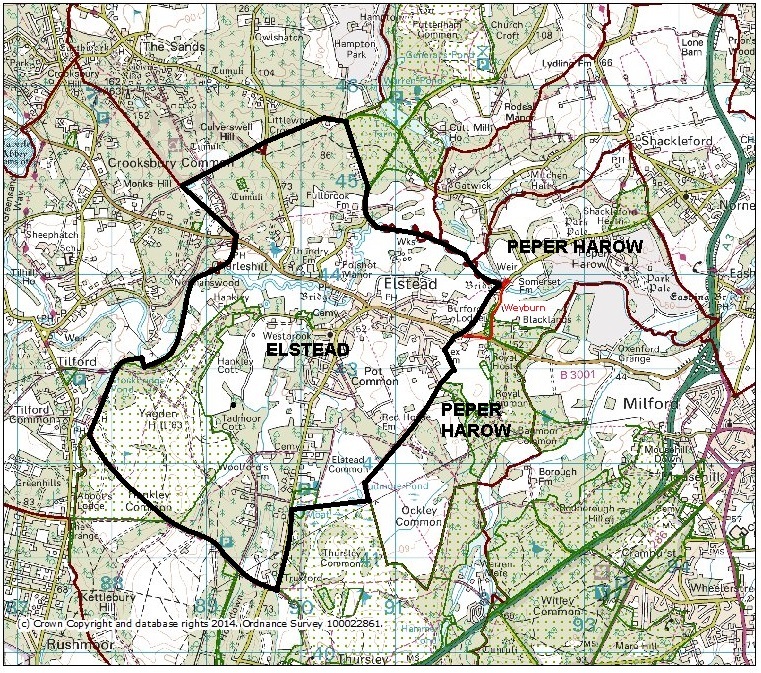 The extended area is outside the Elstead settlement boundary and is in the Green Belt, the AONB and an AGLV and is close to Royal Common (an SSSI and a Special Protected Area). These issues would need to be addressed in any application for change of use. Loss of a potential employment area could also be a problem.

Housing development at Weyburn would not solve all the development problems in Elstead, as Waverley are expecting development within the village to continue at about the same rate as in recent years and more than one developer is shoeing an interest in building in the area in the next few years.

The issues and ideas raised at the meeting are being examined and sorted into manageable groupings for investigation. Volunteers will be formed into working groups to carry out the work and. Angela Koch will be able to give some advice on group formation.

In the meantime the Parish Council is looking for more volunteers to work on the Plan development and there will be more meetings and discussions to ensure that everybody has a chance to be involved.

IDEAS RAISED AT THE MEETING

Notes from the Q&A Section

Q1. Is there a time limit for completing a local plan ?

MO: We want to extend the boundary to include Peper Harrow because the most likely development is WeyBurns. Development there will affect services and utilities in Elstead.

This was seconded by PM.

Q3. Roger: What is the process for reconciling neighbourhood and borough council local plans ? What are the timescales for each ?

AK: Make friends with your local planners. Engage with them ASAP, invite them to meetings. Also talk to (council) transport people.

Roger: Ok but how do you reconcile differences between WBC’s local plan and Elsteads’s neighbourhood plan?

AK: Take a show of hands now on the subject of including Weyburns and tell the WBC executive the result so it is hard for them to reject this proposal.

Q4. Someone needs to publish a definitive map accurately showing the parish boundaries of Elstead, Weybourne, Peper Harrow etc. At present there are four different websites showing four different versions of this.

AK: There is a communications challenge. Often best to hang everything off the parish council’s website.

MO: We are hoping to complete the process by the end of 2015. It depends on the wrok that we put into it and the time taken for Council decisions.

PM: The parish council has sent a letter to WBC about the ten sites identified in WBC’s local plan consultation.  The adoption of a Local Neighbourhood Plan might make the situation better.

MO: Eight sites were assessed by WBC as being unsustainable, including Bonfire Hill. Two sites were considered by WBC to be viable - land at The Croft and land at Weyburns.

[comment from room]: We need to provide the evidence for not using the eight sites.

The developer has now come back again to the parish council requesting a meeting. Again they have been told any meeting must be public.

MO: We need to consider development outside and inside the settlement boundary. This is what the local neighbourhood plan lets us influence. If we don’t have a LNP we will have no chance of dealing with a situation like Bonfire Hill.

AK: In terms of protecting an area, the LNP includes green space designation – a new layer of protection.  Make the case for protecting areas. This needs an evidence base, i.e. based on what the community says. There are examples where a LNP has taken precedence over a draft borough council local plan in an appeal process.

Q6. Peter Hartley: We are not here to discuss potential planning applications. Instead we are asking the village to start on a journey that will give us another planning tools. The focus of the meeting should be on do we want to start on this journey or not ?

The audience was asked to raise their hands if they wanted to produce a Local Neighbourhood Plan. There was an overwhelming degree of support for proceeding.

[MO recounted the example of Coatbridge, Devizes to show the power of a LNP]

The audience was asked to raise their hands if they supported the proposal to include Weyburn site within Elstead’s LNP. There was an overwhelming degree of support for doing this.

BM: Disappointed that WBC chose to include the ten sites in the Local Plan consultation. A LNP is needed to exclude speculative development.

MO: Anyone from Peper Harrow is welcome to participate.

Q8: How do both communities jointly agree decisions about the LNP ?

AK: Get both parish councils to agree a ‘Memorandum of Understanding’.

Q9: What if there is disagreement between Peper Harrow and Elstead about a particular point ?

AK: Referendum will cover both parishes. It is highly recommended that all meetings are public and operate an open door policy so anyone from Peper Harrow can attended if they want to.

MO: Only about three Peper Harrow households live in the area it is proposed to include in the LNP.

Q10: Is there a minimum area for a LNP ? Could Peper Harrow have their own LNP ?

MO: Peper Harrow parish council has already said it does not want to have it’s own LNP.

AK: Avoid ‘turf wars’ and get plan written ASAP – developers will not wait.

Q11. What is the relationship between local services and the LNP ? e.g. schools and fire stations ?

AK: This is the type of thing to be addressed in the evidence base. The working groups need to consider infrastructure requirements and report back to the local community. Begin to capture ideas tonight on the cards.