When Sir Henry Montagu, owner of Kimbolton Castle, was ennobled in 1620, he chose the title 'Viscount Mandeville' , presumably because of its local connections. Four centuries earlier, this Norman surname had been adopted by several Lords of the Manor of Kimbolton by virtue of their descent from Beatrice de Mandeville. The title 'Viscount Mandeville' is still used by the Montagus, now Dukes of Manchester, as a courtesy title for the eldest son and heir.

When Louise, widow of the 7th Duke died in 1911, her surviving son, Lord Charles Montagu, decided to commemorate his mother's life by providing the site for a much-needed village hall. Louise, the beautiful daughter of a Hanoverian Count , had married the future 7th Duke in 1852. The couple were friends of the Prince of Wales, later King Edward VII, and entertained the Prince and his set at house parties at Kimbolton Castle. After the death of the 7th Duke in 1890 , Louise acquired the nickname of 'the Double Duchess' by marrying the Duke of Devonshire, who had been a close friend for nearly 30 years.

The new hall, built from public subscription, was opened shortly before the outbreak of the First World War in 1914 and named "The Mandeville Hall". A few concerts were held in the hall but, with heavy casualties from the fighting in France and Belgium, the building was soon taken into use as a Red Cross Hospital. 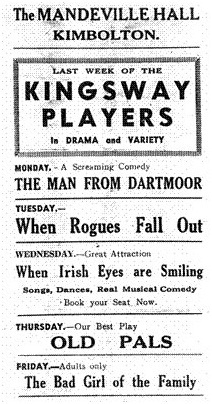 It was probably not until peace was declared at the end of the war that the Mandeville Hall came fully into its own as a focal point for village life. Over the decades, it has hosted countless local events of all kinds including baby clinics, playgroups, badminton matches, carpet bowls, fitness and dancing classes, film shows, pantomimes, plays, Scout Gang Shows, WI, Flower Club and Darby and Joan meetings, wedding receptions, parties and dances, harvest suppers and lunches, quiz nights, whist drives and jumble sales.

Over the years, many alterations and additions have been made to the building. Compare today's building with the picture below taken in 1915.