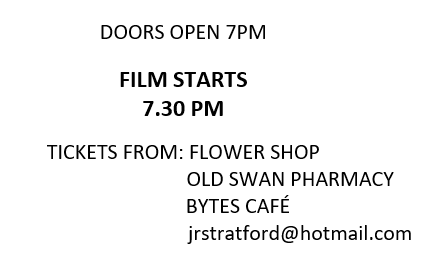 OUR FILM FOR FRIDAY 27 MARCH

Details of our Programme will be posted on this page.

If you would like to be kept informed of our future programme please press HERE to register your email address and your preferences.

If you have any questions please use the form on the left to send an email to kimbolton.cinema@gmail.com

Tickets for our next show are available from Oliver's Cafe, Kimbolton Pharmacy and Bytes Cafe at Mandeville Hall

Doors open at 7pm and the show starts promptly at 7.30pm

See the trailer above for our next film "DOWNTON ABBEY"

The film begins in 1927, about a year and a half after the TV series ended. Buckingham Palace informs Robert and Cora Crawley, the Earl and Countess of Grantham, that King George V and Queen Mary will visit Downton Abbey during a royal tour through Yorkshire. Violet Crawley, Dowager Countess of Grantham, is perturbed that Maud, Lady Bagshaw, Queen Mary's lady-in-waiting, is included in the tour. Robert is Maud's cousin and closest relative, and the two families have long disputed who should inherit Maud's estate.

Rating: PG (for thematic elements, some suggestive material, and language)

"The Downton Abbey movie is a true labour of love and a tribute to its fans, bringing together the complexities of the relationships between the family and their servants and drawing upon plotlines that had never fully been resolved in the show’s finale. It is a reminder of why the show was so treasured, and a homecoming for everyone who fell in love with it.” Daphne Bugler GQ Magazine

"If this is to be a final farewell then it's certainly a good one... Downton Abbey feels exactly the same three-and-a-half years later" Matthew Bond - Mail on Dunday

Michelle Dockery
as Lady Mary Crawley
Every effort will be made to run the films shown above, however sometimes the distributor changes the release date which means that our future programme is subject to alteration without notice. If there is a particular film that you would like to see please contact us and we will enter it in our films under consideration.