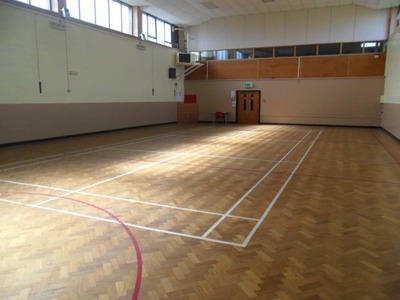 A HISTORY OF MELLOR VILLAGE HALL

Mellor is a compact village of 2,300 people situated on a hill in green belt land just off the A677 Blackburn to Preston Road, and a mile to the east of Samlesbury aerodrome. The story of the present village hall begins in 1976 when, on a Parish Council initiative, a committee was formed of representatives from the various organizations in the village to organize a festival to mark the Queen’s Silver Jubilee in 1977. The festival was held on a 3 acre site in the centre of the village which had originally been assigned by the local land owner to the Parish Council for recreational purposes, and leased on by the Council to a newly formed Sports and Social Club. The club set up on the site a football pitch, two fine tennis courts, a car park, and a second hand prefabricated building for indoor activities.

Following the festival, several members of the Festival Committee were elected onto the ports and Social Club committee, and further improvements to the site were tackled with renewed vigour. It soon became apparent that the prefabricated pavilion was nearing the end of its days and thoughts turned to the prospect of a new building. The Government’s Job Creation scheme looked an attractive way of achieving our objective within our very moderate means at the time, and following a survey aimed at finding out what people wanted to do in their new hall, we signed up a volunteer architect and started fund raising in earnest.

In November 1977 we made the firm decision to go ahead and early the following year entered into a contract with the Manpower Services Commission (MSC) for a Job Creation Programme (JCP) costing £18000 and running from April to December 1978, which would build our new hall. The deal was that the MSC would provide the trades we needed (from the unemployed register) at the time we needed them, and would provide us with the money to pay the men’s’ wages plus an additional 10% which we could use towards tools and materials. To help pay for materials we needed grant aid, and to qualify at that time we needed charitable status and a minimum of 25 years to run on our lease; we actually had 23 years. We formalised changes, which were already in train and adopted a new constitution, which established us as a community association; we became a registered charity, and we set about securing a new lease for 30 years.

To enable us to recover VAT on materials and supplies, we formed a separate 6-man Building Committee, which would be the main contractor, and this was registered under a special Customs and Excise scheme for self-help projects. The Building Committee, as employer, had to be registered with HM Inspector of Taxes for the collection of income tax, national insurance contributions, both from direct employees under PAYE and from subcontractors under CITDS (Construction Industry Tax Deduction Scheme), and with the union UCATT for the Holiday stamp scheme. We had to take out public and employer’s liability insurance. And of course there were the forms and procedures for accounting for our expenditure of MSC funds, and for claiming them.

So there we were, all dressed up and ready to go. Armed with all the trappings of a mini-conglomerate we interviewed, recruited, negotiated material supplies, pegged out the site, and set up a site office, store and messroom. We agreed a deal with a local contractor whereby he would excavate the site in exchange for the top soil, which he would sell for his own benefit. We cut the first sod on 28th March 1978.

Our problems started even before the more pessimistic of us had anticipated. The excavation contractor, having removed the valuable topsoil and a modest amount of the underlying clay, declared that he had been misled as to the depth of the excavation and now required payment for removing the rest of the clay. The structural design of the building had to be changed at a late date from a ‘brick box’ to a steel framed construction, at greater cost and with different foundations. Excavations exposed an underground watercourse which flooded the site, the weather was atrocious, and the quality and availability of labour of the required trades left much be desired. By December 1978,
the end of the nine-month JCP programme, we had done little more than excavate the site, lay the foundations, and erect the steelwork. Our original six-man building team was now a four-
man building team.

Fortunately, we had been able to secure a further 12 months of MSC funding, now under the Special Temporary Employment Programme (STEP). STEP was similar to JCP except that our recruits now had to have been on the unemployed register for at least 12 months, so we were not expecting miracles now from our MSC funding. Nevertheless, it helped to keep the project rolling along. Our main need now was for bricklayers. We managed to find a few but they usually stayed long enough only to claim their tax refund from previous jobs. One couple claimed to have been working in Germany; they were treated badly, and were ordered off a site on one occasion at pistol point, but they were paid around £700 per week so didn’t mind putting up with the occasional indignity. Our rates were fixed by the MSC at £56 per week. These two were quite good and we devised a productivity bonus scheme for them on the best terms we could afford in an effort to induce them to stay. We had to reimburse the MSC for the cost of the scheme, and because the employer’s national insurance contribution was more than it would have been without the scheme, we had to work out the difference and reimburse the MSC in respect of that too! Had the “Jobsworth Award” been around at the time we would have nominated our friends at the MSC for it. It proved quite impossible to hire scaffolders, joiners or roofers, which we also needed badly, at the prescribed rates, even off the long term unemployed register.

As it became increasingly apparent that we were in for a long haul, we bought on favourable terms the concrete mixer and scaffolding we had on hire and which were becoming a drain on resources; at least we would be able to sell them when we finished. By the end of the STEP programme in December 1979 we had about half the brick and blockwork completed and we were on our own; no roof, floor, joinery, plumbing, or electrics, no more MSC funding, and our building committee had shrunk to three.

The tempo was never exhilarating under JCP/STEP, but it fell away almost to nothing in the year that followed. Fortunately our fund raising was gathering momentum and over the next few years we were able to employ contractors to complete the brickwork and continue with the joinery, roofing and
plumbing, while committee members and friends built the mezzanine floor and rooms at the north end of the hall and the reinforced concrete staircase linking the two levels. This made the building just about useable for the occasional fundraising function, and as our efforts over the years were exposed for all
to see, the level of interest started to improve quite dramatically and new people emerged; to help with fund raising, to demand that we complete the building as soon as possible so that they could use it (really!), and, inevitably, to tell us how we should have done it.

Just as well. We were by now down to the last remaining member of the original building team, though happily new people had come on board during the course of the project. Most notable amongst these was the late and much missed Bob Ledger (in the white shirt, above) who led the project through to completion. The work continued apace: the electrical installation, fitting out of toilets, kitchen, storerooms, windowsills, interior joinery, fittings and glazing, woodblock flooring, plastering, fire protection, false ceiling, decorating, tiling of the toilets, additional work that the building inspector required for the entertainment licence, and so it went on.

No building is ever quite finished, and so it is with ours: we’re still working on it. But by the end of 1985 we had the best village hall in the Ribble Valley and sufficient income from it to make fundraising obsolete. Not that we did of course, it becomes a habit!

For those who like numbers, the final cost of £112,258 in March 1985 was funded from the following sources;

The author served as honorary treasurer throughout the duration of the project and also as clerk of works for the last few years. He was the only member of the original building committee to serve throughout.

A New Roof with addition of PhotoVoltaic Tiles(PVs)

In 2014, the hall obtained a grant from the Lancashire Environmental Fund (LEF), a fund benefitting from Land Fill taxation monies. The Fund was established in 1998 as a not-for-profit organisation to support community and environmental projects within Lancashire with grants generated by the Landfill Communities Fund. Funds are provided by SITA UK Ltd Waste Management Company and Lancashire County Council. We can qualify for funding as our project location is within 10 miles of a licensed landfill site.

The grant obtained was for carbon reduction works at the hall, which included 10 kilo watt of photovoltaic panels (PV) on the main hall roof and a new fully insulated hot water cylinder heated by the PV panels. In this way the hot water in the hall is provided for free. At the same time the main hall roof covering, fascias, soffits and rainwater goods were overhauled and where necessary renewed.

This work provided for the foundation of carbon reduction at the hall and ensuring the umbrella of the building will be maintenance free for years to come. Not only did the committee at this time think of the future of the hall but also the income to the Association. As a result the Association receives a quarterly cheque for electricity created by the PV panels, which helps pay towards the running costs of the hall. 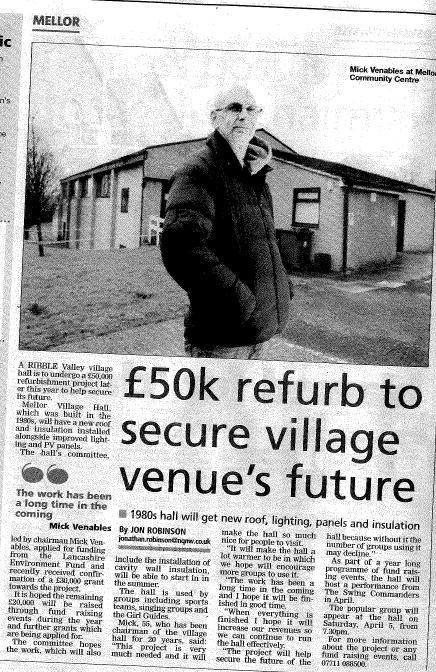