History of the MU in Grimsargh 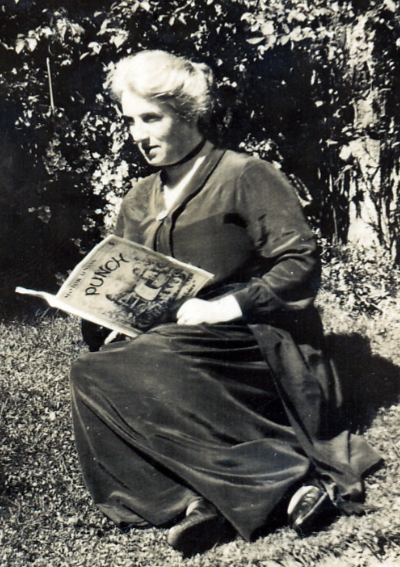 In 1931 the Vicar of Grimsargh was the rev. Robert George Stanley. His wife, Hope Stanley, was a member of the Mothers' Union from a previous parish and she wished to start a branch in Grimsargh. An invitation was given to the mothers of young children to a meeting. Below are transcripts of two articles from the Church Magazine of the period describing the response to the invitations.

We invited the mothers of our young children to a meeting at the Vicarage on February 5th to hear about the Mothers' Union Society. Twenty eight came and we decided that we would like to start a branch in Grimsargh.

The Mothers' union is a great prayer union joining us together in prayer, and putting a high ideal of Home Life before us, so that we may help each other. There are more than half a million members in many parts of the world and more than 10,000 in the Blackburn Diocese. All married women who have been baptised are admitted as Members. Unmarried women who are interested and sympathetic, may join as Associate Members. 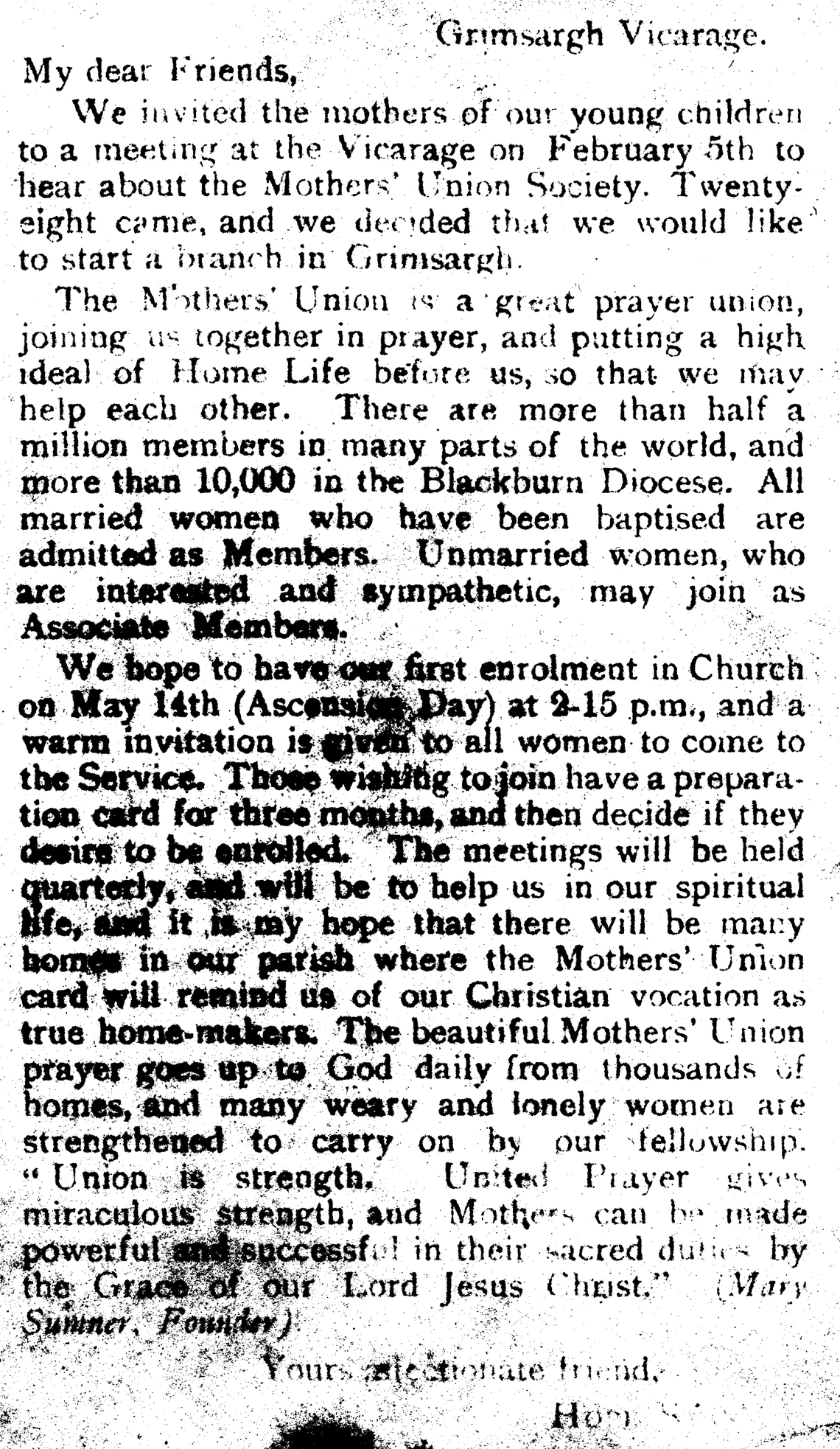 We hope to have our first enrolment in Church on May 14th (ascension Day) at 2-15 p.m.. and a warm invitation is given to all women to come to the Service. Those wishing to join have a preparation card for three months, and then decide if they desire to be enrolled. The meetings will be held quarterly, and will be to help us in our spiritual life, and it is my hope that there will be manyl homes in our parish where the Mothers' Union card will remind us of our Christian vocation as true home-makers. The beautiful Mother's Union prayer goes up to God daily from thousands of homes, and many weary and lonely women are strengthened to carry on by our fellowship "Union is strength, United Prayer gives miraculous strength, and Mothers can be made powerful and successful in their sacred duties by the Grace of our Lord Jesus Christ"
(Mary Sumner, Founder).

A Service was held in Church on Ascension Day, May 14th, fifty women being present, when the following were enrolled as the first members of our Branch: 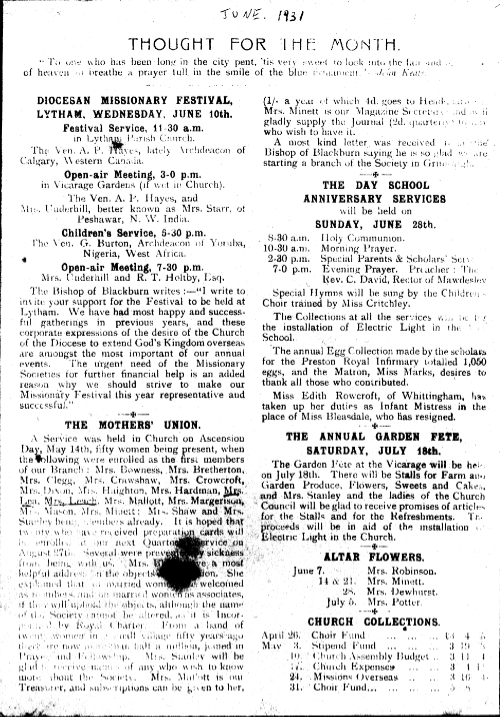 Mrs. Shaw and Mrs. Stanley being members already. It is hoped that twenty who have received preparation cards will be enrolled at our next Quarterly Service on August 27th. Several were prevented by sickness from being with us.
Mrs. Bxxxx gave a most helpful address on the objects of the Union. She explained that all married women are welcomed as members and unmarried women as associates, if they will uphold the objects, although the name of the Society cannot be altered, as it is incorporated by Royal Charter.
From a band of twenty women in a small village fifty years ago there are now more than half a million, joined in Prayer and Fellowship. Mrs Stanley will be glad to receive names of any who wish to know more about the Society.
Mrs Mallott is our Treasurer and subscriptions can be given to her, (1/- a year of which 4d. goes to Head Office) Mrs. Minnett is our Magazine Secretary and will gladly supply the Journal (2d. quarterly) for those who wish to have it.
A most kind letter was received from the Bishop of Blackburn saying he is so glad we are starting a branch of the Society in Grimsargh. The original Grimsargh MU banner was dedicated around 1932.

This banner was used until 2016 when, in need of repair,

it was decided to replace it with a new one. 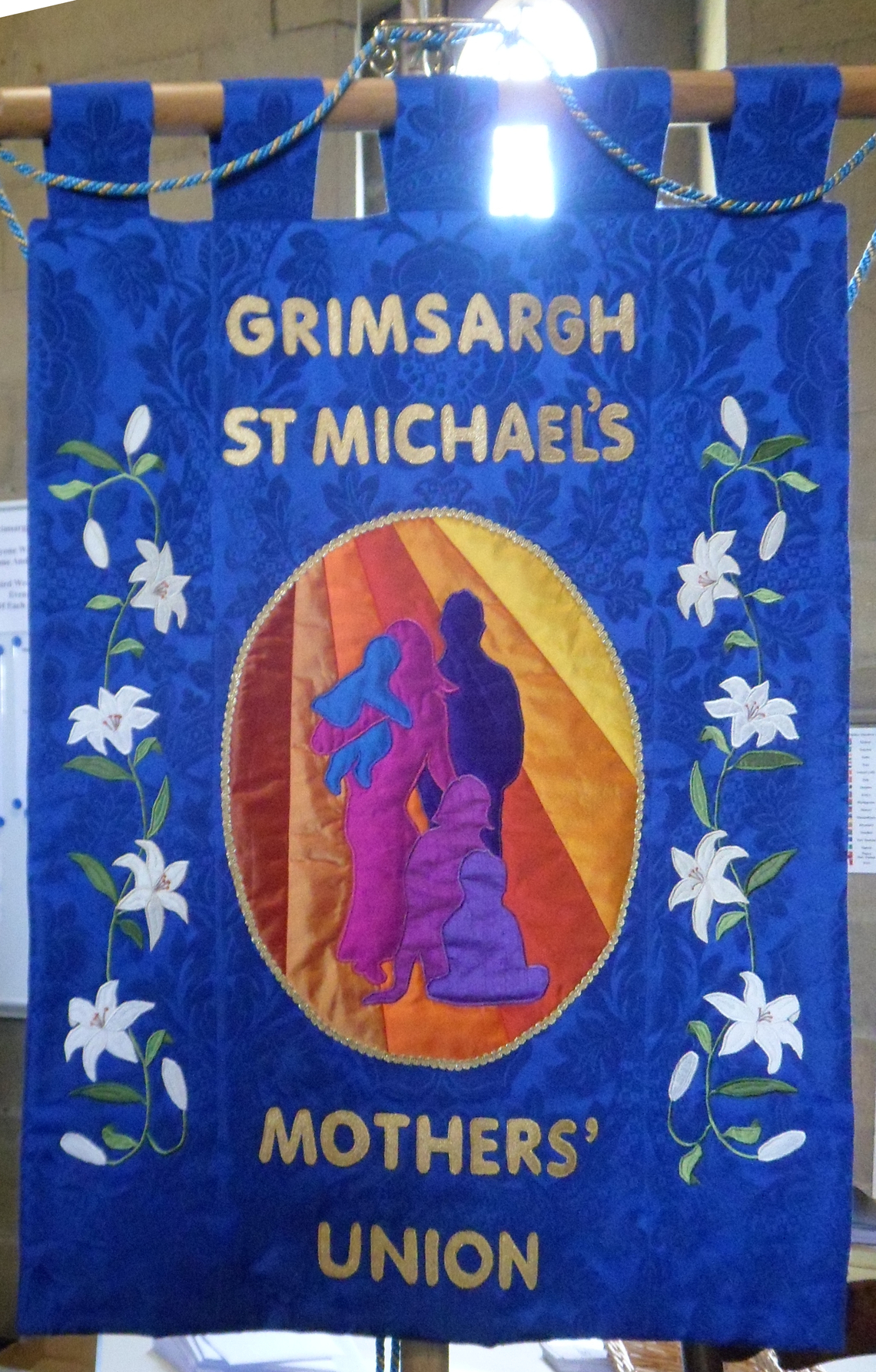 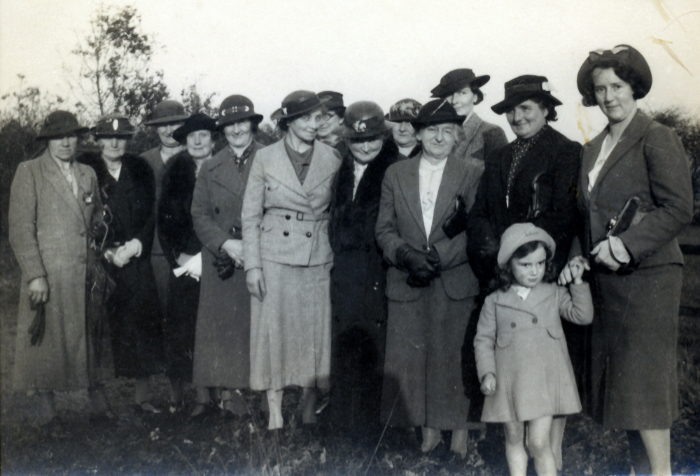