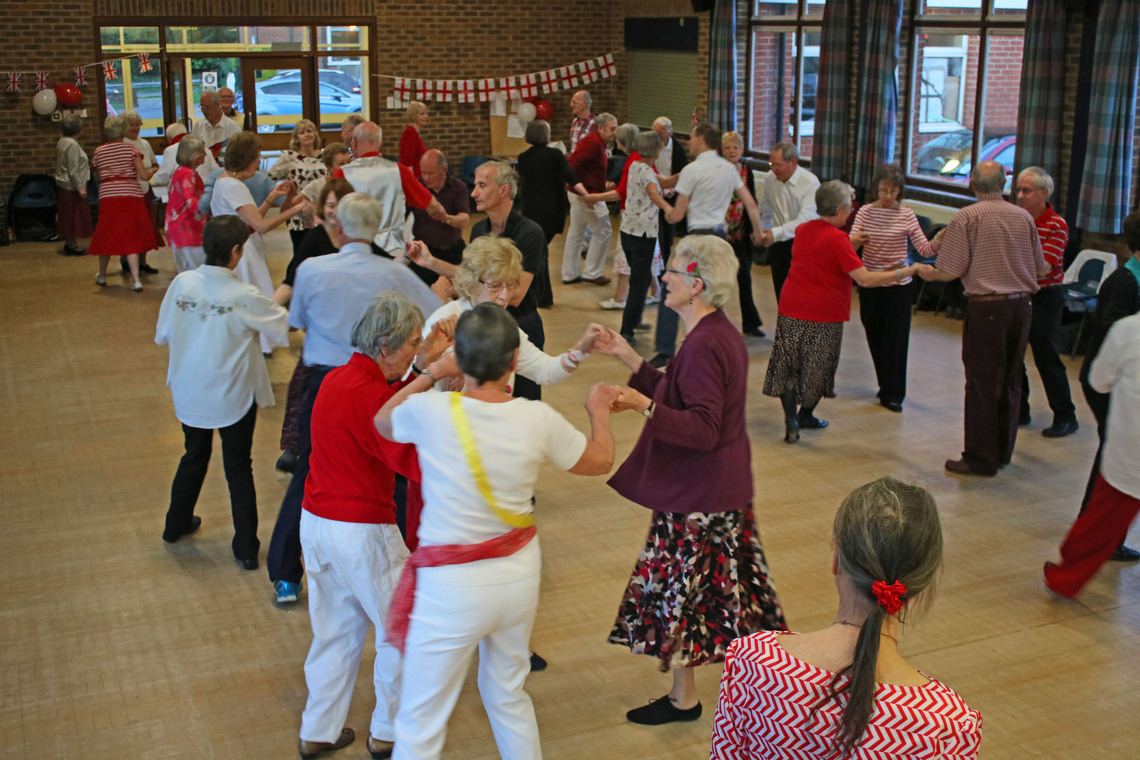 Not many dance clubs can claim to have begun life in a field, but that is just what Banwood did.

In 1928 a group of friends, led by Spencer Ranger, began learning traditional folk dances in a meadow in Woodmansterne Lane, dancing to a “wind-up” gramophone.

Ninety years later, Banwood Folk Dance Club is still going strong – but these days members dance in the comfort of a church hall.

To celebrate the anniversary, Banwood is planning a number of special dances this year. The first one was on Wednesday 25 April, when guest caller Ivan Aitken called the steps to music played by two-piece group Jip.

The dance was held at the Club’s regular meeting place, St Ann’s Church Hall in Brighton Road, Banstead, SM7 1BS. There were drinks and nibbles in the break and a birthday cake to help celebrate. About 50 members and guests enjoyed the evening.

As well as the green roots of the club, Banwood also has an unusual name, formed from two distinct groups. Banstead Country Dance Club is the older branch, started even before the English Folk Dance and Song Society was set up (from two separate groups). Spencer Ranger was a friend of Cecil Sharp who led the revival of traditional music and dancing in the 1920s.

Woodmansterne Folk Dance Club was set up about 1960 after the success of a series of six folk dance lessons organised by St Peter’s Parish Fellowship. A Mrs Gilford called the dances while her husband played the tunes on his accordion. 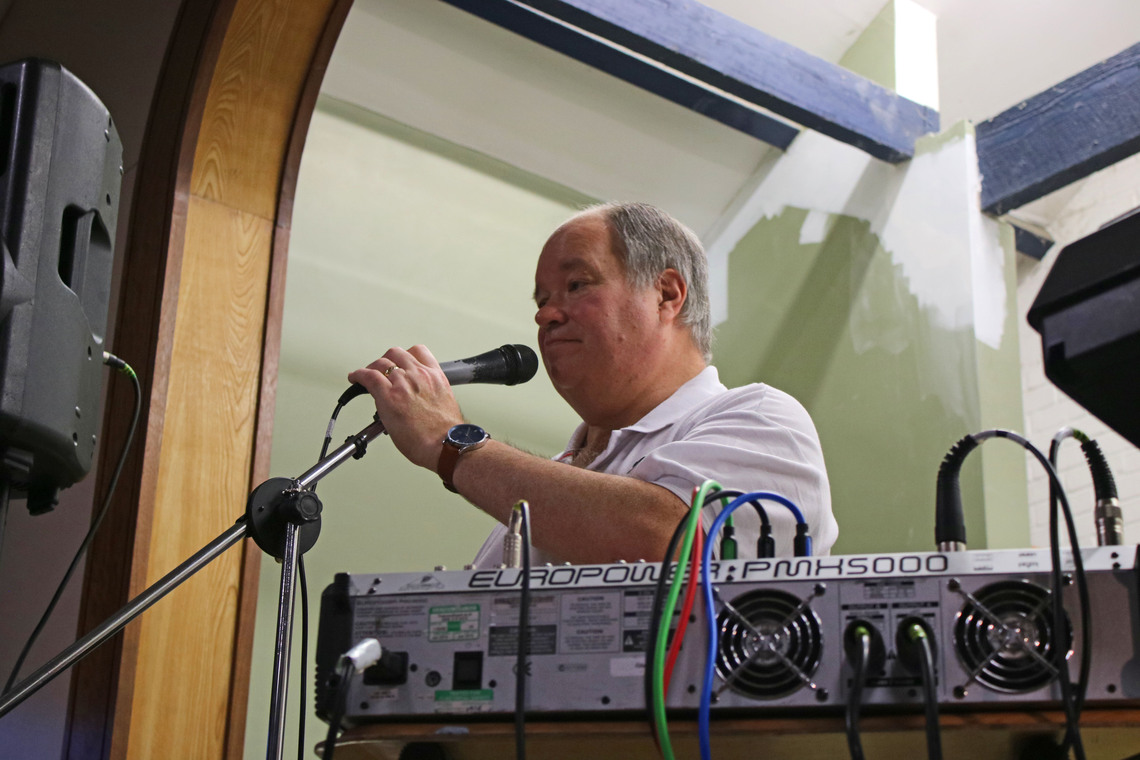 In the late 1970s both clubs were suffering from low membership and decided to join forces in 1979, becoming Banwood Folk Dance Club.

Today, with a variety of guest callers and dance styles, and a mix of live and recorded music, the emphasis is still on enjoying folk dancing. Beginners as well as experienced dancers are always welcome to the Wednesday meetings at 8pm and the first visit is free.

The Banstead group initially started in a meadow in Woodmansterne Lane dancing to a “wind-up” gramophone, in the winter they moved into “The Barn” with its open log fire (this becoming “The Miss Cass School of Ballet). Later to the gardens of the “Well House” home of Mrs Clay (but now a block of flats), Banstead Hall and other houses near the Community Hall. The music provided was by Vi (Spencer’s wife) was on the piano until Mr Gurr took over from her. There is no record of how the piano was transported to the various locations.

When local school halls came on offer to “educational adult classes” the Junior school in the High Street (now Waitrose) was used, then the Girls Central School (now “The Beacon”) followed by the school in “the Horseshoe”, where Mrs Luckman was Headmistress. She took over from Spencer Ranger when he gave up his role in the group. Later when she retired the next move was to the Wooden Church Hall at St. Anne’s Banstead and for one year while this was being rebuilt the Church Hall of the “Good Shepherd” at Tadworth was used. While in the Wooden Hall Gwen Dilke took over from Mrs Luckman and when Banstead and Woodmansterne clubs merged Betty Smoker joined Gwen as the main club callers.

Spencer Ranger knew Cecil Sharp and was also a founder member of The Greensleeves Morris team. They came along together with Kenneth Lovelace, their musician, to help us celebrate our 55th Anniversary. Unfortunately neither Spencer or Kenneth are with us but they would be pleased to see our flourishing club.

The parish of fellowship organised six lessons by Dr and Mrs Gilford at St Peter’s Church Hall, Woodmansterne on Wednesday evenings in 1960. The fellowship were so impressed by the turnout that they decided to carry on. When the parish fellowship folded up, it was decided by the Gilfords that we should apply for the Hall at Woodmansterne School. This was when our name became “Woodmansterne Club”. Mrs Gilford continued to call for us and Dr Gilford played the accordion. All of the evenings were very successful, however the Gilfords moved to Birmingham in 1968 and the late Len Chitty played for us with different callers. In the late 1970s numbers dwindled and it was decided to merge with Banstead club a name had to be found and it became known as “ Banwood Club” and I believe Marjorie Hollingbery instigated that.

A memorable dance was held at the Banstead Community Hall on 24th February 1983. It celebrated the formation of the Banstead Folk Dance group in 1928 by Spencer Ranger, who was present as the guest of honour.

There was a lovely evening of dancing to the music The Dansonairs with calling by our group’s resident callers, Gwen Dilke and Betty Smoker. Two sessions of Morris dancing were provided by a strong team of Greensleeves Morris Men, which included three ex squires of the Morris Ring.

The customary interval for refreshments was extended to contain the Birthday celebrations. The Birthday cake made by Doreen Holness and iced by Shirley Jones’ daughter, was cut by Mrs Ranger and all present toasted the Banwood group with a price and a glass of wine made by Bill Holness

When introducing Mr Ranger, Mr Harvey (the Banstead Group Chairman) welcomed a number of other people who had contributed to the success of the group in earlier years. Mr Ranger remarked that he had started the Banstead group in a meadow not far from his house in Woodmansterne Lane in 1928. Subsequently dancing had taken place in the gardens of The Well House, Banstead Hall and other houses all within a few hundred yards of the present Community Hall. Spencer Ranger was also founder member of The Greensleeves Morris Men in 1926 and it gave him particular pleasure to watch the high standard of dancing which they produced in his honour. Later in the evening Mr Ranger was heard to remark, “Oh, a few years to your diamond, I will book that date”.

The presence of Kenneth Lovelace, the 75 year old musician of The Greensleeves, and Mr Ranger illustrated that folk dancing keeps you “young”.

Unfortunately neither Spencer or Kenneth are with us but they would be pleased to see our flourishing club. We are certainly 70 not out.

Celebrations took place at our usual venue on 23rd April 2008.

The caller was Carol Hewson accompanied by the Footnotes band.

The event was attended by over 80 dancers from various local clubs and a thoroughly enjoyable evening was had by all.