Come and join Cantanti Camerati in a concert of beautiful carols for choir and audience from across the ages and across the continent, with organ, readings, handbells and percussion. Sung in a variety of languages, including English!

Interval drinks available: wine, juice and complimentary mince pies. And the Church tower bells will be rung before the concert to add to our festivities. 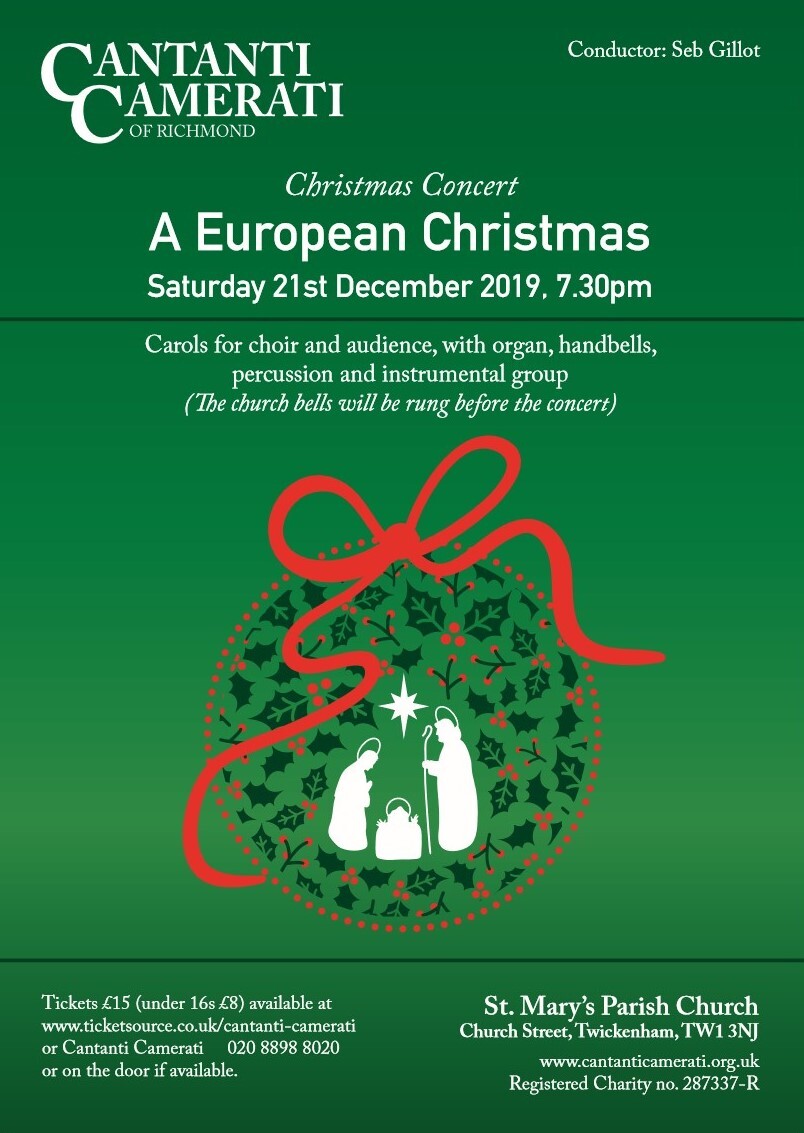 Autumn Concert - "Pictures at an Exhibition"

Step into the gallery as Cantanti Camerati take us on a private view with music that reflects themes present in four well-known paintings. Expect the roughness of the high seas, the wonder and solitude of travel and exploration, and the calming hush of starry nights. Music selections from the Renaissance and Age of Enlightenment through to the late 20th Century. 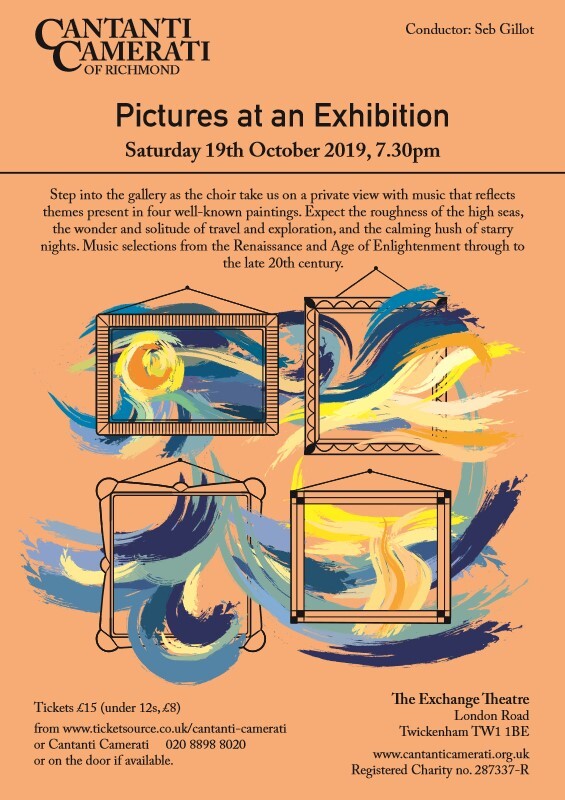 Summer Concert - "The Flowers appear on the Earth"

As part of 'Twickenham Goes Green’, Cantanti Camerati presents a varied and exciting array of songs, arias and choral works, each with the Earth as its keynote; flowers, birds, trees and plants all brought vividly to life by Purcell, Haydn, Mendelssohn and others.

Join us for a concert in an idyllic church setting on Twickenham Riverside, with interval drinks and refreshments available. 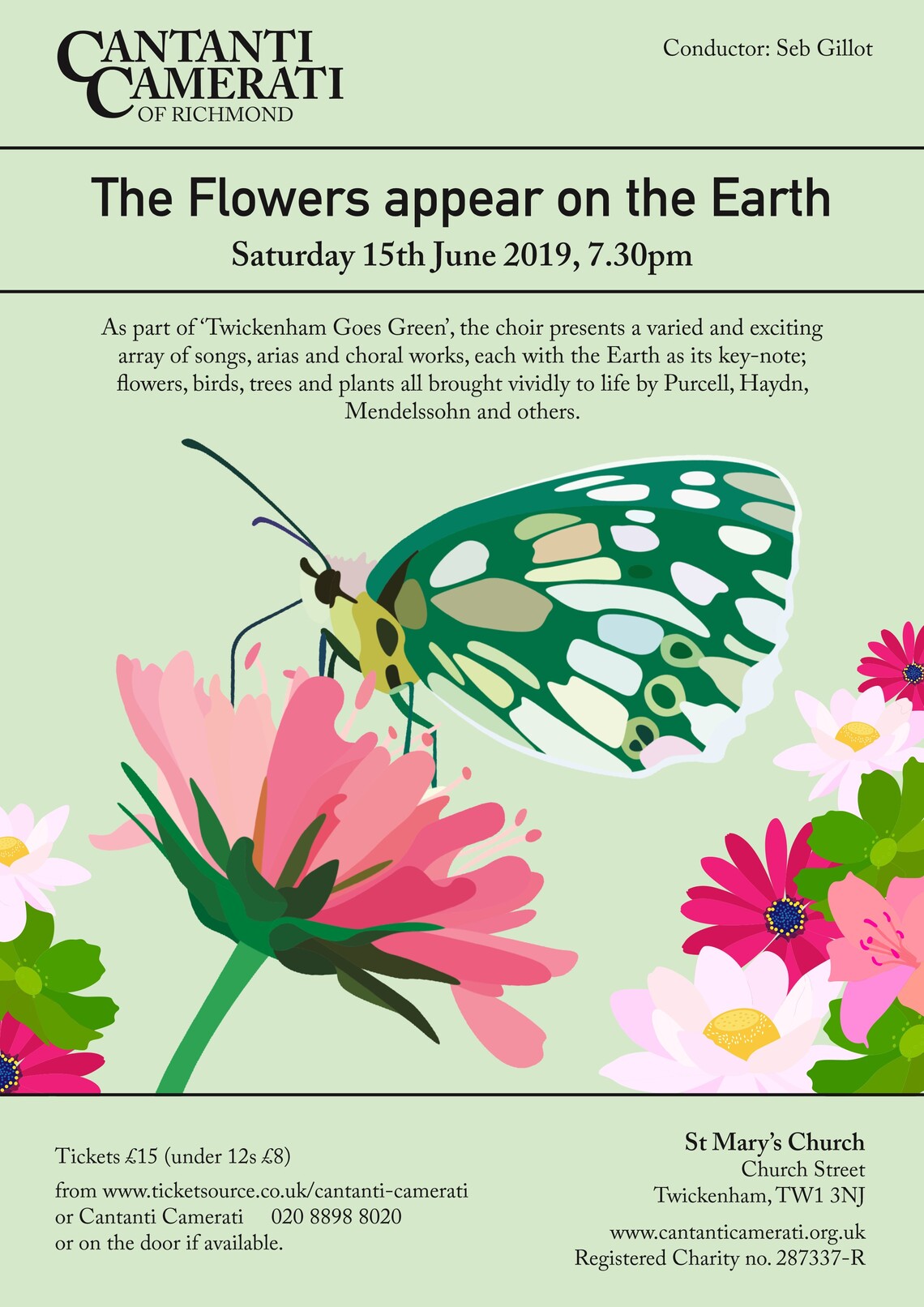 Join Cantanti Camerati for their March concert, "Shakespeare in Song", featuring a variety of musical settings of words from Shakespeare’s plays and sonnets, including Chilcott, Finzi, Morley, Vaughan Williams, Parry, Haydn, Beach, Shearing and others, interspersed with selected readings.  Performed in an informal setting, cabaret-style, with licensed bar (evening) or teas/cakes available (afternoon). 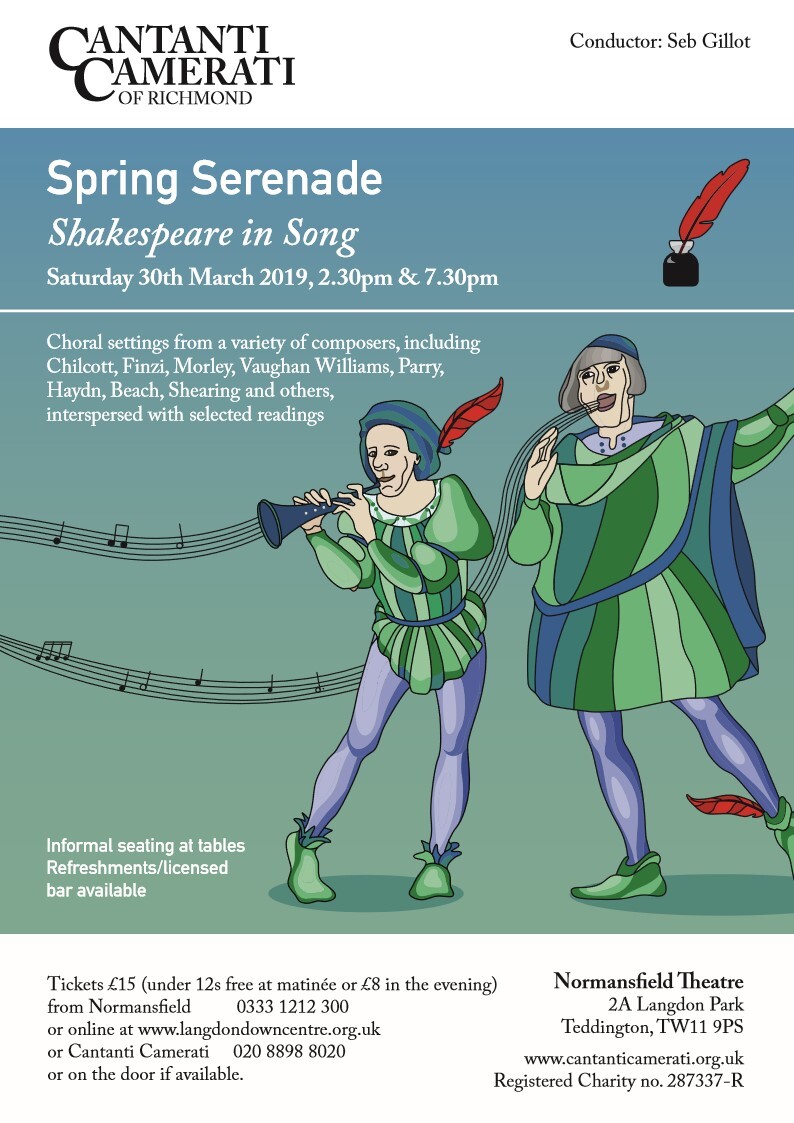 Christmas Concert - "Out of Darkness into Light"

Come and join Cantanti Camerati for a delightful blend of old and new seasonal favourites, in a Christmas concert entitled “Out of Darkness into Light”. Including carols for choir and audience, readings, organ, string ensemble, handbells and hurdy-gurdy, all announced by the church tower bells ringing before the concert.

Wine, soft drinks and mince pies available to purchase in the interval. 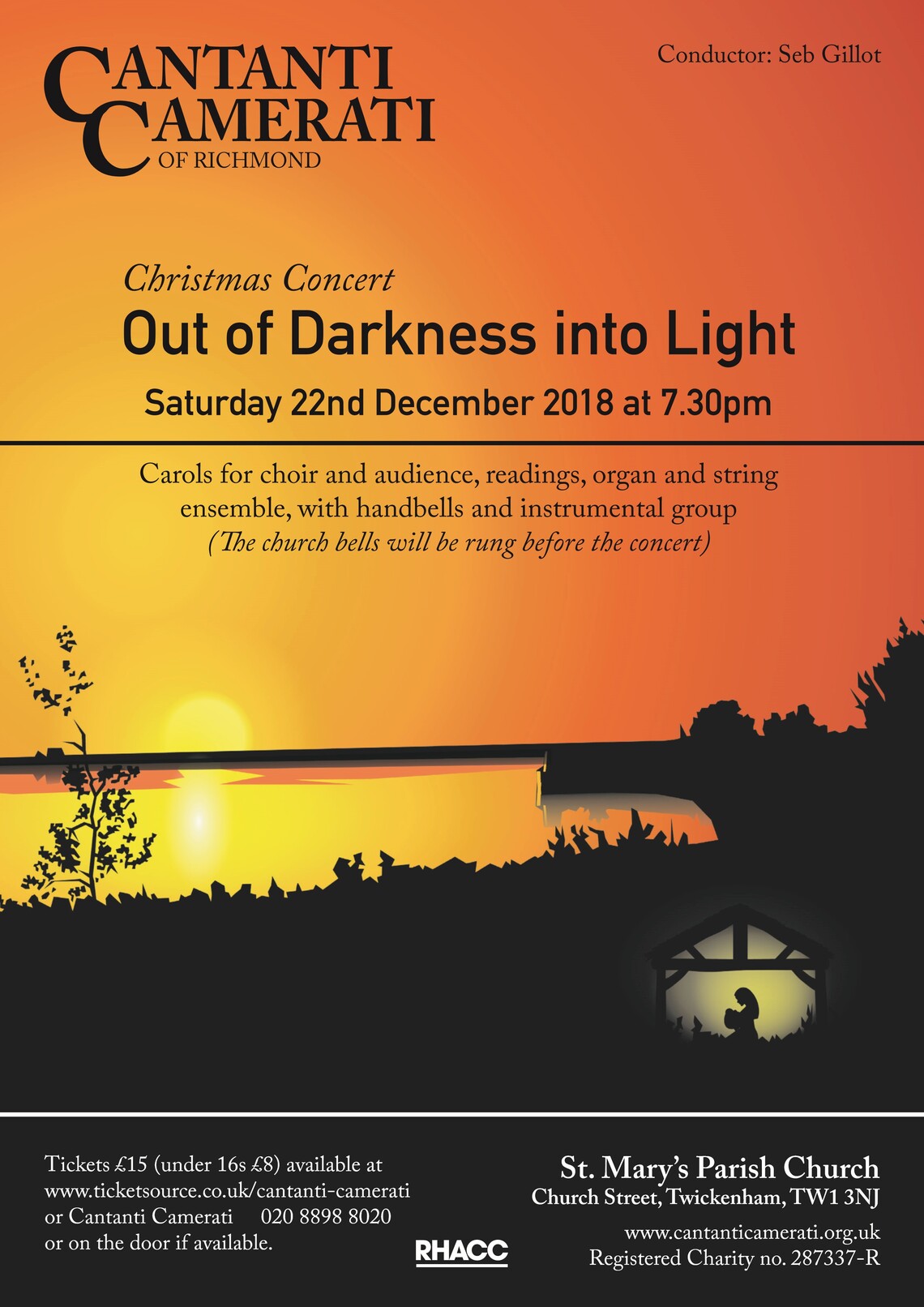 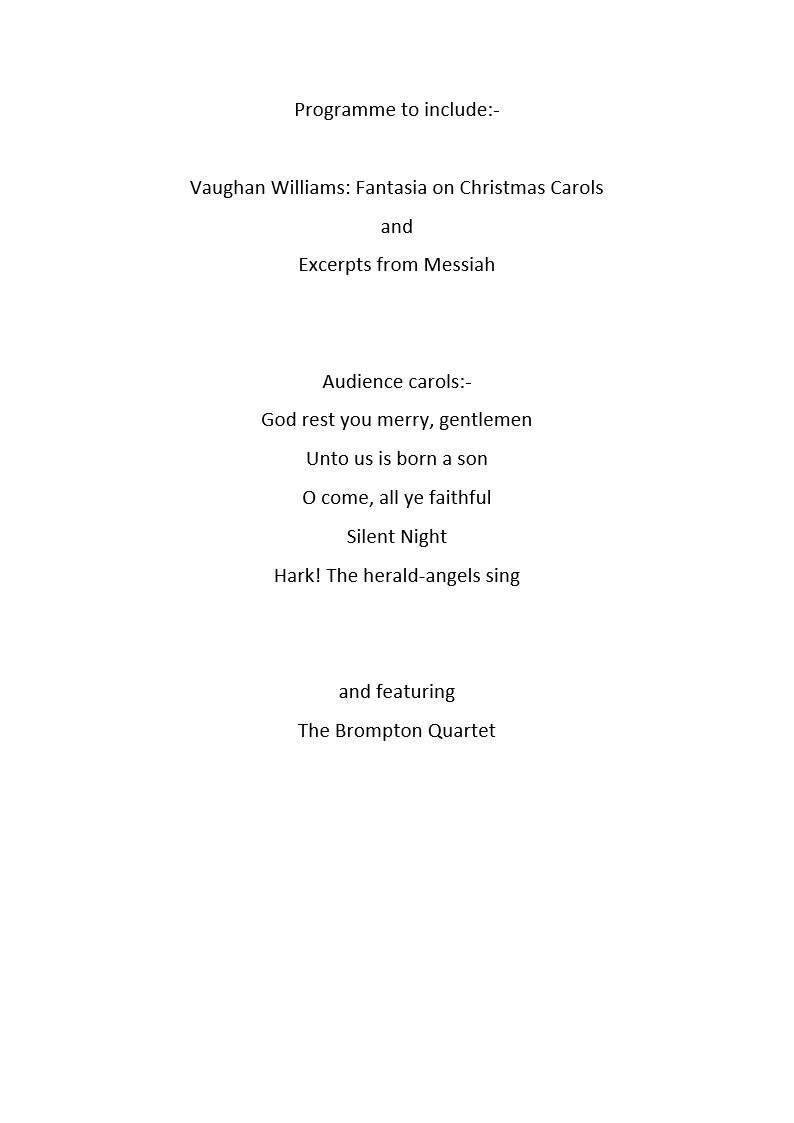 The choir presents a lively and varied evening of entertainment led by conductor Seb Gillot. 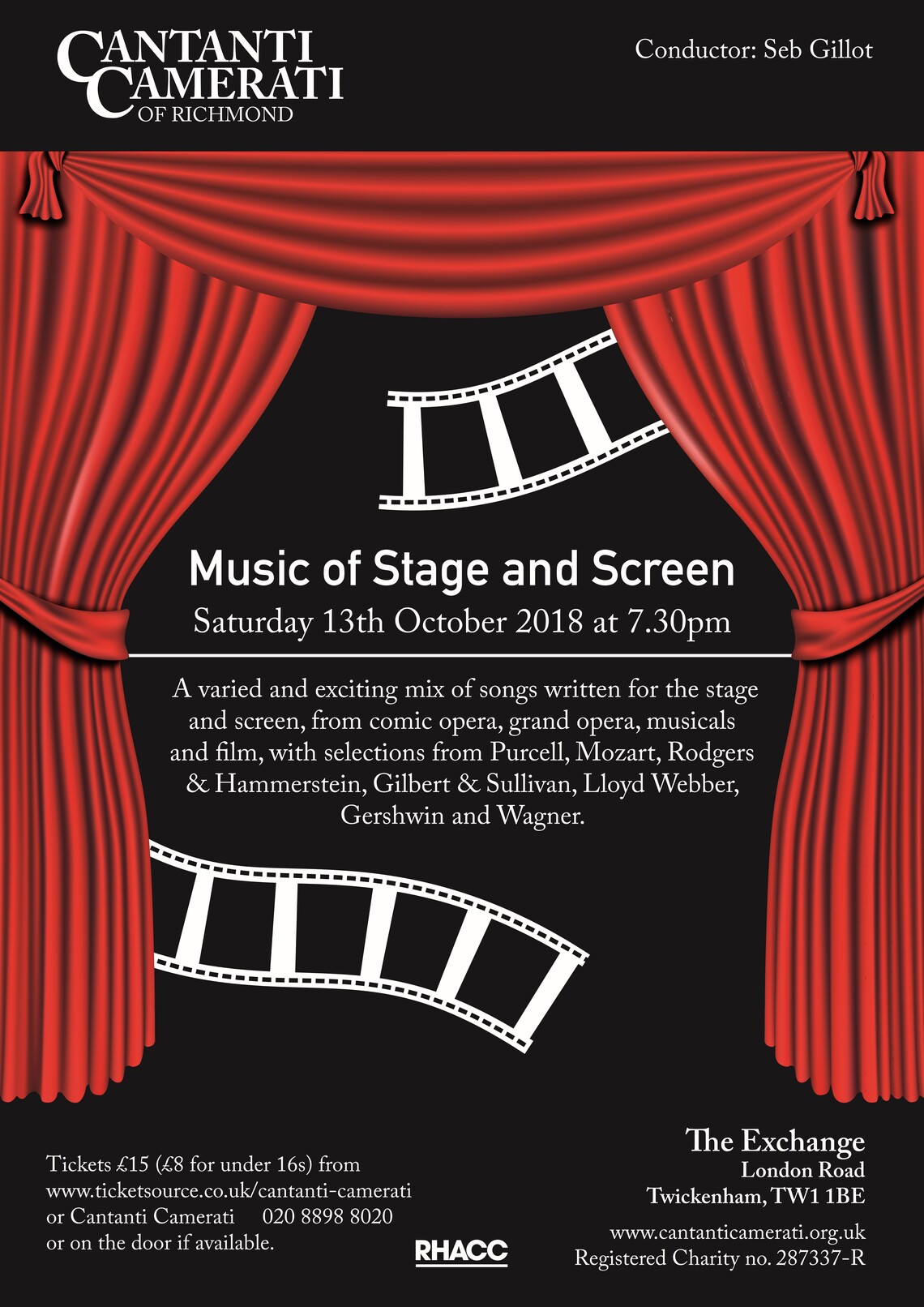 Under the baton of our new Musical Director, Seb Gillot, the choir celebrates with a trip down memory lane, revisiting some of the wonderful music enjoyed over the last fifty years. Favourite madrigals, partsongs, motets, anthems, folksong settings, spirituals, and a round to reminisce at home and abroad with our friends in our twinned choirs. Including opportunities for all past members in the audience to join in some numbers on the day. With pianist/organist Jon Booth. 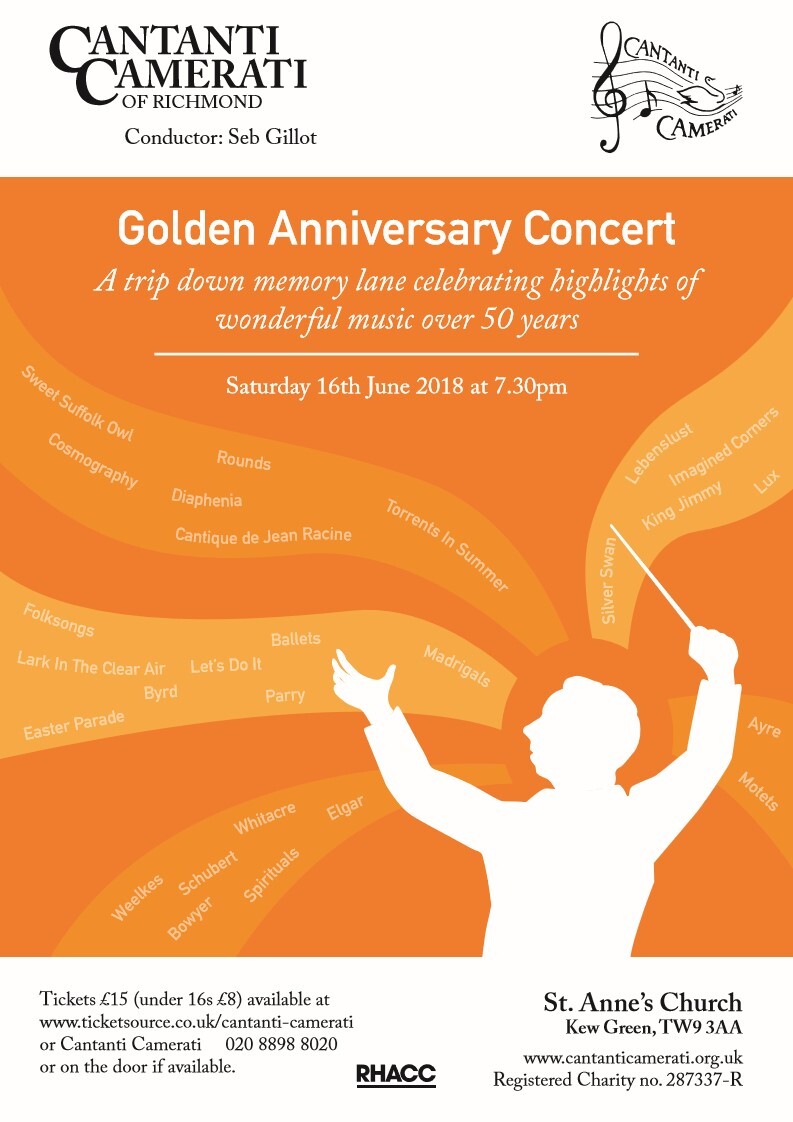 Spring Serenade: All at Sea!

A nautical theme means that Cantanti Camerati are “All at Sea!” for their spring serenade at Normansfield Theatre. Join us for a selection of salty songs, including extracts from “HMS Pinafore”, and songs celebrating the richness and diversity of the oceans.  An informal audience setting awaits you in the fabulous Grade 2* Victorian theatre, for music with audience participation.  Interval refreshments (licensed bar at evening performance).

A participating concert in the Richmond-upon-Thames Music and Drama Festival 2018. 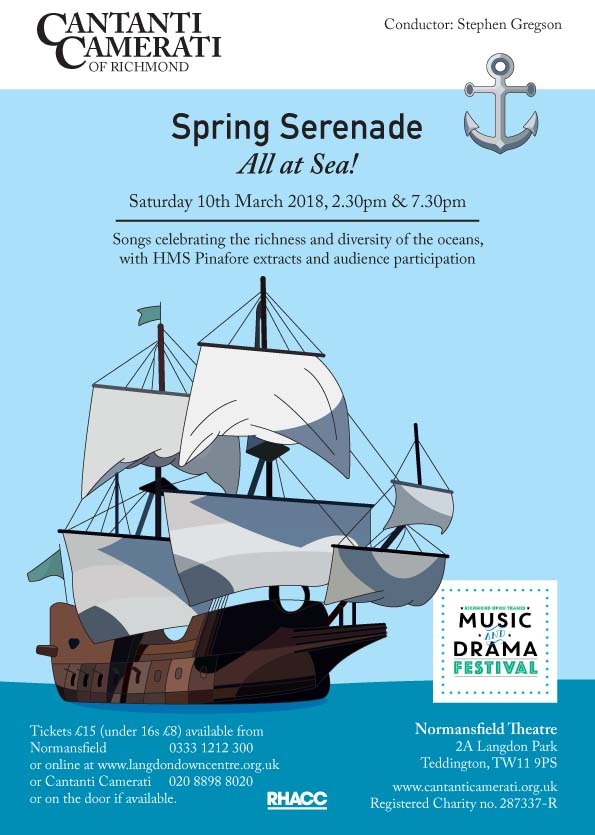 Come and celebrate Christmas in a traditional fashion with Cantanti Camerati.  Carols for choir and audience, organ and brass ensemble, accompany familiar carol arrangements and contemporary settings, together with music for handbells and instrumental groups.  With spirited wassail, gentle lullaby and meditative motet this concert will reflect the essence of Christmas.

The church tower bells will be rung before the concert. 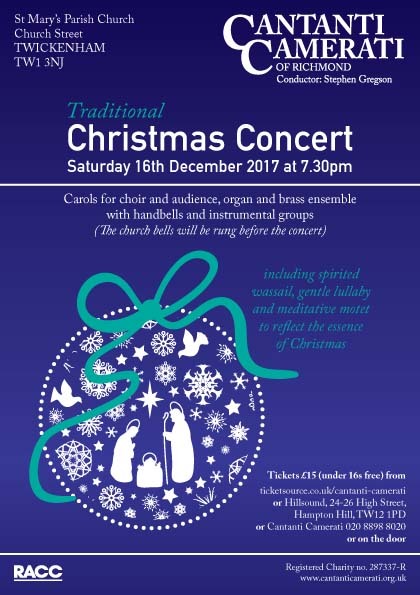 If you enjoy variety in concert programmes, then don’t miss Cantanti Camerati’s autumn concert.  Entitled “A Choral Tapestry” it is a colourful selection of items with a number of musical threads:  gloriously rich Tudor polyphony contrasted with nineteenth century Romanticism in the first part of the programme, and scintillating contemporary harmony balanced with lighthearted American folksong arrangements in the second. 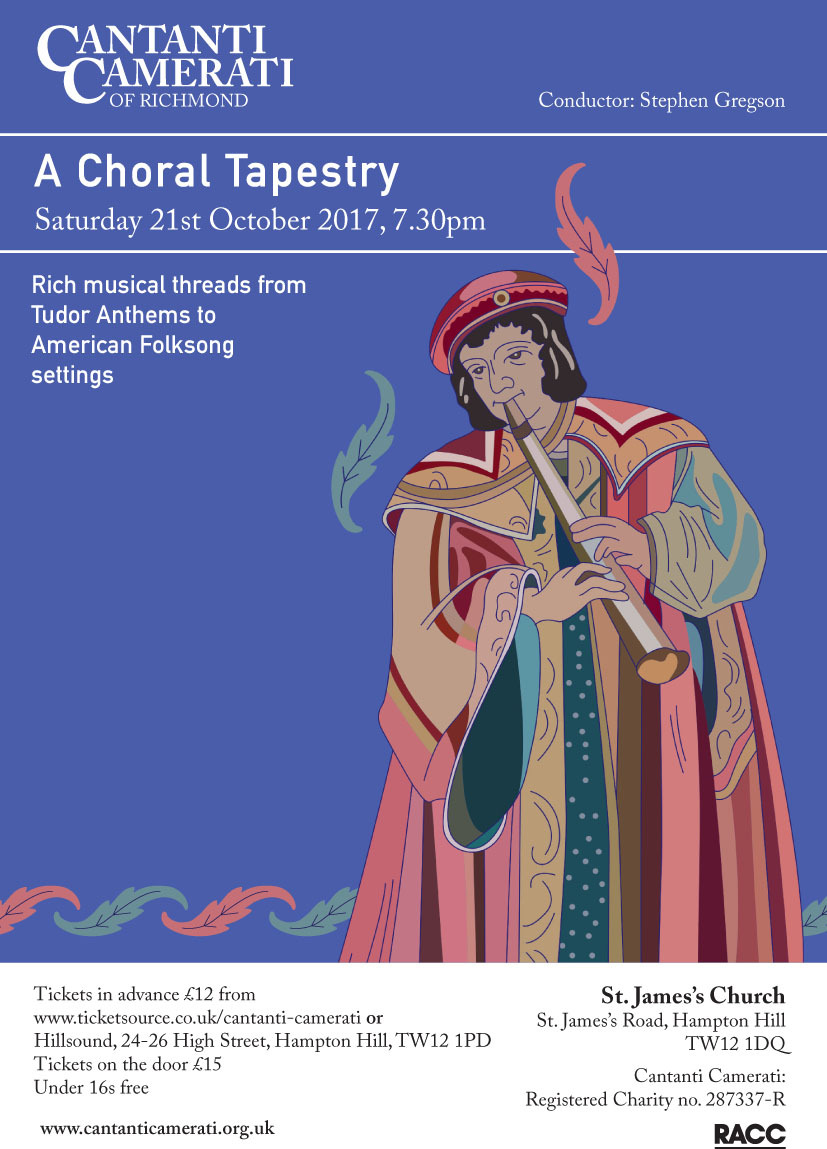 and Elgar's Serenade for Strings

This colourful and dramatic work is paired with Bob Chilcott’s Five days that changed the world which also incorporates young voices and celebrates significant events that contributed to world civilisation. The programme is completed by Elgar’s wistful and lyrical Serenade for strings. 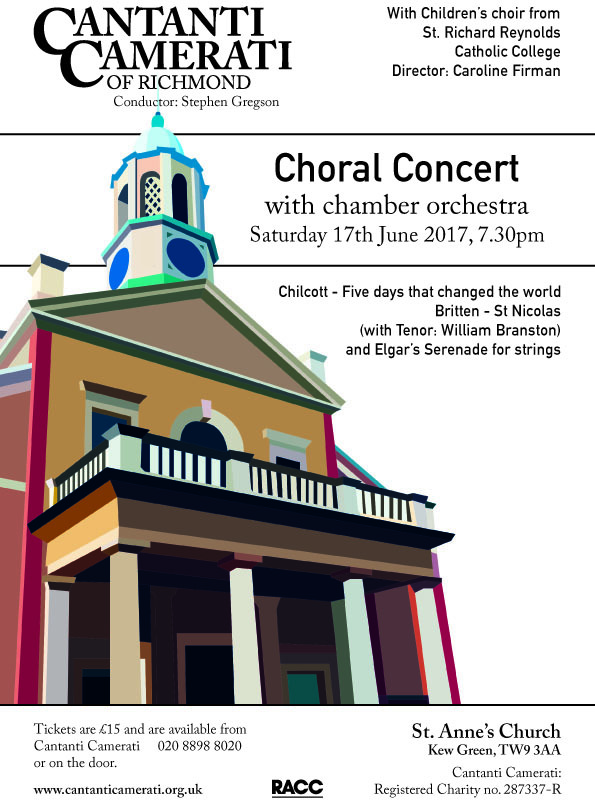 Join local chamber choir Cantanti Camerati in the picturesque Normansfield Theatre for a lighthearted concert in an informal setting.  Stephen Gregson, Conductor, will present a contrasting selection of a capella songs from different eras, new and old, plus music from 'Les Miserables'.  The programme will include Rutter’s Five Childhood Lyrics, an eclectic mix of madrigals and partsongs, and will definitely invite audience participation!

Our special guests are The Guards’ Saxophone Quartet from the Corps of Army Music.

Carols for Choir and Audience, with Handbells, Organ and String Ensemble

A traditional Christmas Concert with the opportunity to participate in singing favourite carols, with a return appearance of the Camilli String Quartet accompanying the choir in extracts from Handel’s Messiah, together with some well-known carol settings, and some of the best of contemporary compositions. Add to this a lively wassail and a performance from the handbell team and this becomes an entertaining and festive evening! 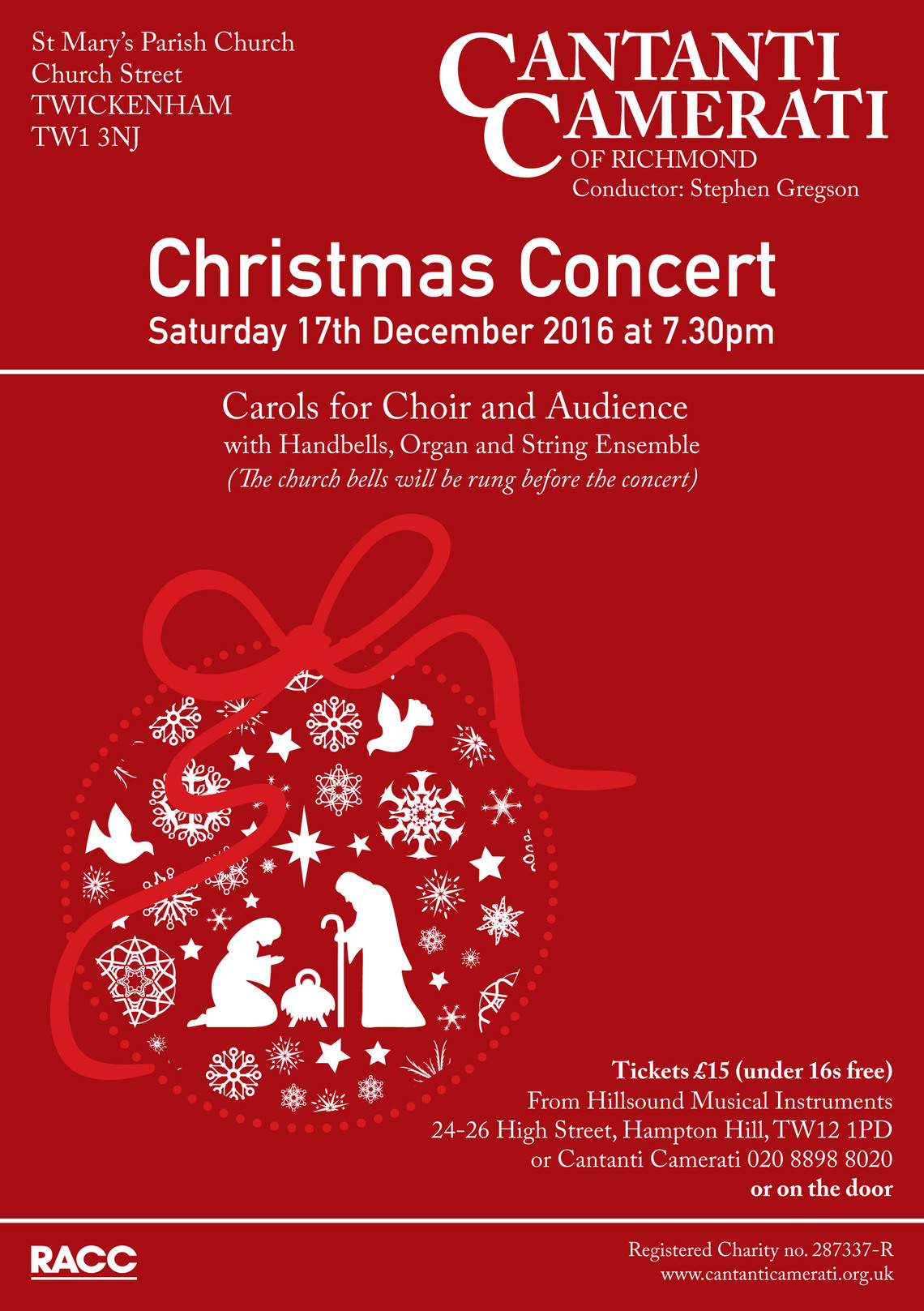 Autumn Concert - 'From East to West'

Sacred vocal music from Russia to Portugal (via Austria and England) including anthems from the Russian Orthodox tradition, Renaissance anthems by Portuguese and Spanish composers, compositions from Austria of the Romantic period, and music by English composers Tavener and Rutter. With Guest Percussionist Matthew Farthing (BBC Young Musician 2014 Finalist). 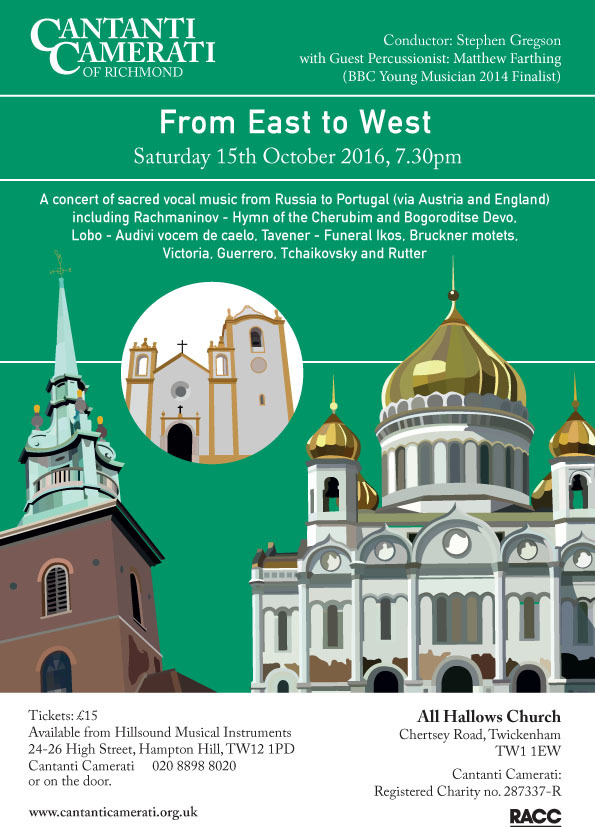 A selection of madrigals from The Triumphs of Oriana in honour of the Queen's 90th birthday, Vaughan Williams’ Three Shakespeare Songs, evocative partsongs by Stanford, a selection of spirituals and more contemporary numbers.

A celebration of the work of Handel, Purcell, Blow and Boyce including two of Handel’s festive Coronation Anthems, “The King shall rejoice” and “My heart is inditing”, contrasted with unaccompanied works such as the haunting “Hear my prayer” of Purcell and “Salvator mundi” of Blow complemented by Boyce's joyous Symphony in D and Handel’s charming Concerto Grosso in G Op.6 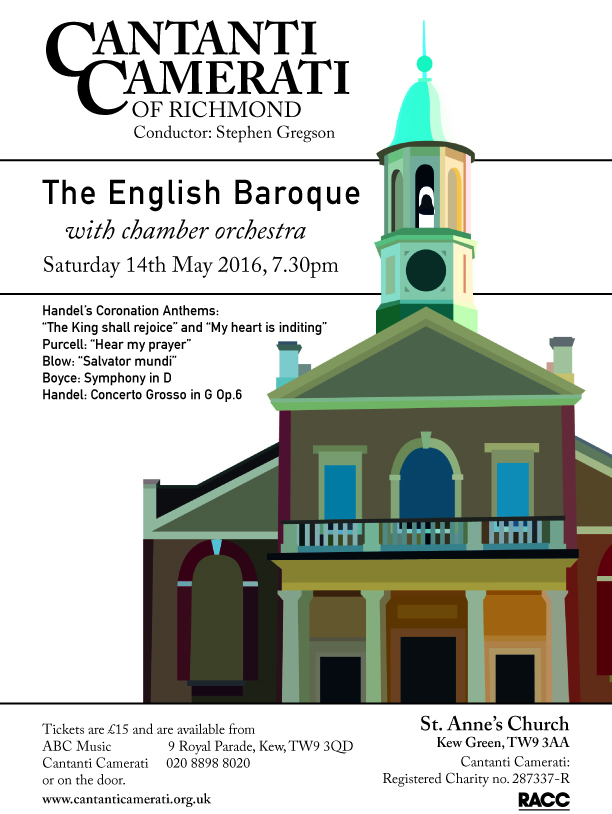 A special celebration of forty years of “Just a Song at Twilight” with Conductor Stephen Gregson and special Guest Conductor Geoffrey Bowyer, the founder of these concerts. The theme is “My Fair Lady”: an appreciation of female beauty and virtue in song, including madrigals, part songs, contemporary settings and numerous numbers from the Lerner and Loewe musical (with plenty of opportunity for audience participation!)

Carols for Choir and Audience, with Handbells, Organ and String Ensemble

A traditional Christmas Concert, with music from rustic wassail to contemporary carol, and plenty of opportunity for audience participation in some old favourites.

On the classical side we feature Das neugeborne Kindelein by Buxtehude, and antiphonal motets by Palestrina and Scheidt, and this year we revive some well-loved arrangements by Sir Malcolm Sargent and Sir David Willcocks. We also include a lovely arrangement of I wonder as I wander by Geoffrey Bowyer, and Malcolm Archer’s A child is born in Bethlehem. With Jon Booth (Organ) and Camilli String Quartet.

'With Heart and Soul and Voice!' - a concert of sacred and secular music

A celebration of choral music from the Renaissance to the present day; including English madrigals (Farnaby, Vautor and Tomkins), with anthems and other sacred works from later periods (Bach and Brückner), romantic part-songs (eg Sterndale Bennett and Elgar), and a selection of recent choral works (Eric Whitacre's 'Lux Aurumque' and Tavener's 'Song for Athene').