"THE GREAT HEALTH DEBATE"  on the future of UK Health Policy in the 21st Century:

The discussion was informative, interesting and stimulating, and can be heard here:   https://vimeo.com/244265100

Our Annual General Meeting (AGM) was held and and a new Steering Group elected.

The Democratic Deficit Group led a discussion on what progressive politics should look like in the context of South West Surrey.

Other Research and Action Groups reported to the meeting.  The details of these groups can be found here.

A review of the General Election campaign and how to further develop a progressive alliance in SW Surrey.

After a breathless campaign launched after our progressive forum, Dr Lousie Irvine came a very creditable 2nd in the SW Surrey constituency election.  An enthusiastic group of volunteers based in Farnham, Godalming and Haslemere put leaflets through most doors in the constituency, canvassed, distributed signboards, tweeted and spread the message that a progressive altenative was possible in SW Surrey.  Louise received 12,000 votes which is a remarkable total for a candidate not from the three main parties  Louise's share of the vote increased by 11%, while Jeremy Hunt's majority was cut by 8%.   We all felt that with more time to plan and prepare, and with full and official collaboration between progressives, we could threaten the conservative hold on this area.

The results of our Progressive Forum are making waves nationally!

At a packed meeting on 6th May, a wide cross section of Compass supporters and others interested in securing a single progressive candidate to contest the general election against Jeremy Hunt in SW Surrey voted overwhelmingly to support Louise Irvine of the National Health Action Party as a unity, progressive alliance candidate. 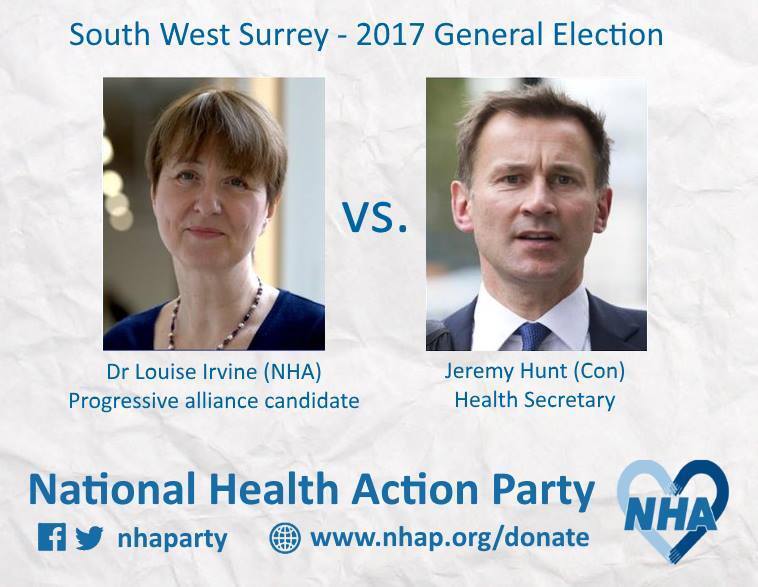 The meeting was a groundbreaking moment for the 2017 general election campaign in South West Surrey. Jeremy Hunt is a deeply unpopular MP among many of his constituents, who hold him responsible for the current sorry state of the National Health Service. He is a pro-Remain Tory who has now become an apologist for Teresa May's hard line on Brexit.

Jeremy Hunt is now facing a serious challenge from a highly capable and articulate GP who is well accustomed to taking him on and fighting for keeping our National Health Service as a high quality, well funded public service, providing world class healthcare for all, free to the user at the point of use.

Louise already has a strong team around her of experienced people from Labour, LibDems and Greens and those with no party political affiliation who are determined to help her to bring about the shock result of the 2017 general election. Louise's success has been brought about by a critical mass of committed and caring progressive people who have thrown party tribalism to the wind and united behind the candidate best placed to defeat Jermey Hunt.

South West Surrey can do a service for the country by holding Jeremy Hunt to account for the damage this government has done to the health service, and replacing him with a member of parliament who is truly passionate about the health service and who will promote policies of care and compassion and social justice.

After over 200 people attended the public meeting on "Progressive Politics Moving Forward" last Wednesday, there has been a groundswell of support for a single progressive candidate to oppose Jeremy Hunt in South West Surrey in the General Election.

We believe that the process of moving towards agreement on a single progressive parliamentary candidate for South West Surrey must be as open and transparent as possible. In order to facilitate this process, South West Surrey Compass will be holding a Progressive Forum open to all members of the public in advance of the close of nominations for the new parliament, in the morning of Saturday 6th May at Farncombe Parish Church in St John Street, Farncombe (GU7 3EJ).

Hope to see you once again at our public meeting!

Please book on line to be sure of a seat:
https://www.eventbrite.co.uk/e/a-progressive-forum-for-south-west-surrey-tickets-34056194996

- and visit the new website whose purpose is to reset politics in the next General Election and end one party rule!
www.progressivealliance.org.uk

At our public meeting in Godalming on 19/4/17, Jonathan Bartley, co-leader of the Green Party, Neal Lawson national chair of Compass, Godalming’s own Baroness (Kate) Parminter, and Andreé Frieze of the Green Party spoke to a packed and enthusiastic audience on why now is the time for us all to work together in a Progressive Alliance to ensure a government that will work for a sustainable, just, more equal, future for us all.

There’s never been a time when a vote counted more. Join us. Let’s talk, let’s discuss, let’s plan. But let’s act. The alternative is unthinkable.

We would like all those on the (progressive) centre left and left in British politics – including Greens, Labour, Liberal Democrats and those with no party affiliation – to work together to support a vision of a good society and a more equal, democratic and sustainable future.

This is founded on the belief that no single issue, organisation or political party can make a Good Society a reality by themselves so we have to work together to make it happen.

In South West Surrey / Waverley, Conservatives dominate all Councils – elected in many seats on a minority of the vote in elections at County, Waverley and town/parish level. In the long run we believe in proportional representation in local (and national) government so that all voices are heard in council chambers.

Given the current electoral systems we want to work in alliances with all (progressive) centre left and left forces to improve the chances of non-Conservative representatives being voted onto local councils.

Through our work, we want to see local government following procedures that are inclusive, transparent and accountable to local communities.

We share a view that in terms of wealth, income and opportunities Britain has become a less equal country over the last thirty years and that it necessary for the health of our society that this trend is reversed.

We disagree with the implication in much of Conservative policy that private providers are always able to provide better services and better value than the state.

As far as local government is concerned, we think that the Conservative government has restricted Councils, both financially and with laws and regulations, so that it is impossible for them in many areas to provide good quality services. The government’s apparent commitment to a hard Brexit does not help.

Against this background, our policies for local government will aim to do whatever is possible to protect and improve the services which residents want and need.