On the last of the summer visits, 10 members of the Society went to Great Chalfield and then on to the Courts Garden.

Great Chalfield Manor was built between 1465 and 1480 by Thomas Tropnell, a lawyer and land owner. Our guide hinted that his fortune was amassed not altogether legally. He managed the financial affairs of other people; records were not always kept resulting in Tropnell becoming a wealthy man. He laid claim to the land on which Great Chalfield was built after a legal dispute involving the Bishop of Salisbury. The Manor has a defensible gatehouse (it was built during the Wars of the Roses) and did have a perimeter wall. It has a great hall which is looked down on by three stone masks with eye holes through which people in the upstairs rooms could spy on the people below. One of the masks is thought to represent Henry VI as it has an asses ears, another is thought to represent the Bishop of Salisbury and is equally unflattering.

There is a wall painting in the dining room which is believed to be Tropnell. Also in the dining room is a squint to observe the front door. If the intentions of the visitor were suspect, he was admitted through a low door within the main door so he would enter the house crouching and vulnerable. The upstairs bedrooms have large oriel windows. During the Civil War parliamentary soldiers broke almost all of the glass in the windows apart from a couple of panes as they hoped to avoid a curse uttered by the lady of the manor. Glass was a very expensive commodity, people would take it with them if leaving home for long periods. The oriel windows look over the court yard to the little church of All Saints built in the 14th century, with later additions. Tropnell added the tower and bellcote so that the little church would not be dwarfed by the Manor.

The Manor was unoccupied for 200 years before a major restoration by the Fuller family who were London brewers. It has been used in several films and TV dramas including The Other Boleyn Girl, the 2008 TV version of Tess of the D'Urbervilles, Wolf Hall (Henry VIII gallops through the gatehouse arch and is immediately in Derbyshire!) and currently it is the home of Dr and Mrs Enys, known as Kellewarren, in Poldark. The scene where Elizabeth Warleggan throws herself down the stairs hoping to hasten the birth of her child was filmed at Great Chalfield standing in for the stairs at Chavenage (visited by the CDAS in 2017). Part of the scene has Elizabeth throwing a vase down the stairs. Our guide explained that the vase in the scene had been especially made from sugar so it shattered easily.

Outside, the gardens are wonderful with four “yew houses”, lawns and colourful borders.

We then went on to the Courts garden at Holt. The gardens were created in 1902 by George Hastings on the site of an early 19th century woollen mill. It has lawns, borders, lily ponds, a Giverny style bridge, orchards, a conservatory and an arboretum. The only part of the Georgian House open to the public is the Rose Garden cafe. This is in the former billiard room. It was very crowded when we visited , several members went nearby for lunch. There is a second hand book shop in the garden area.

We were blessed with good weather for our visit, which ended the 2019 summer program. 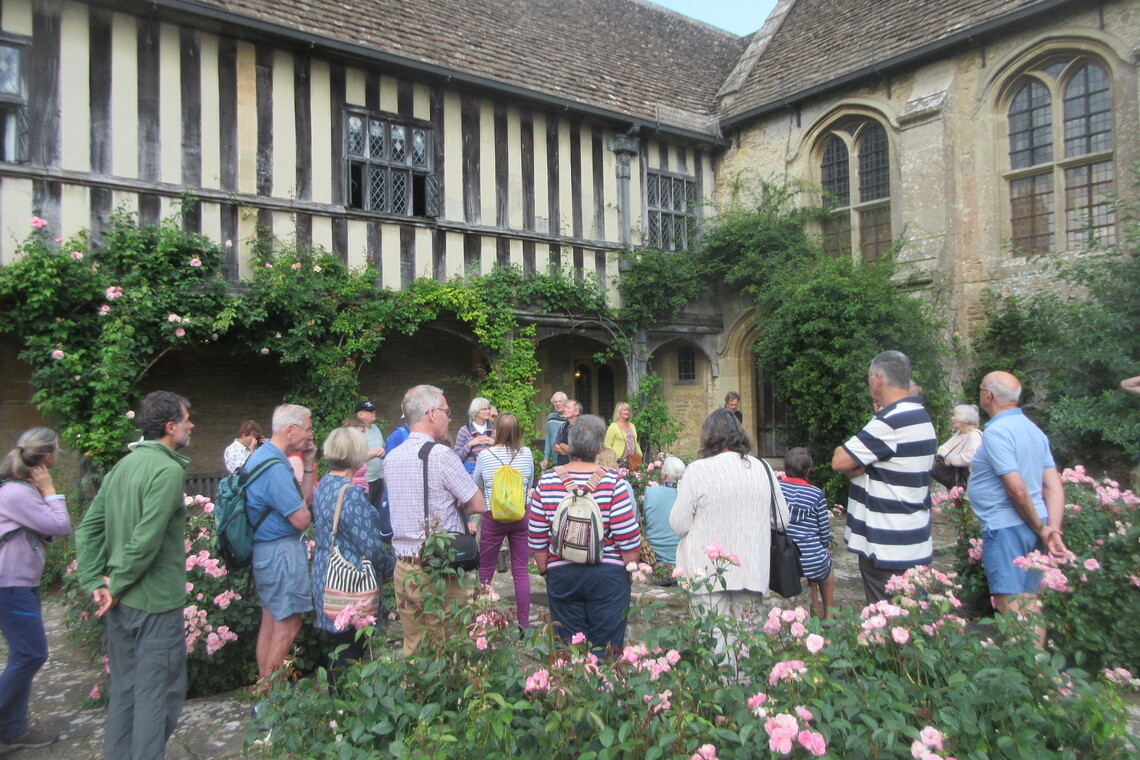 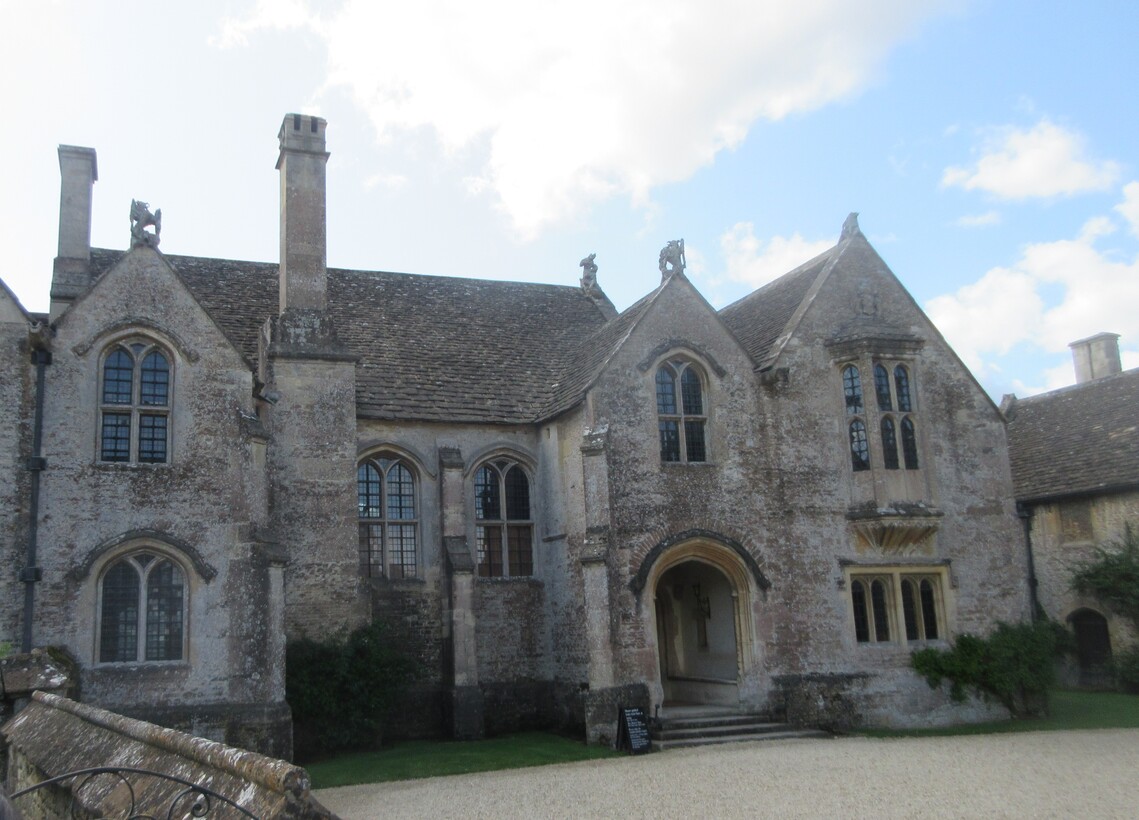 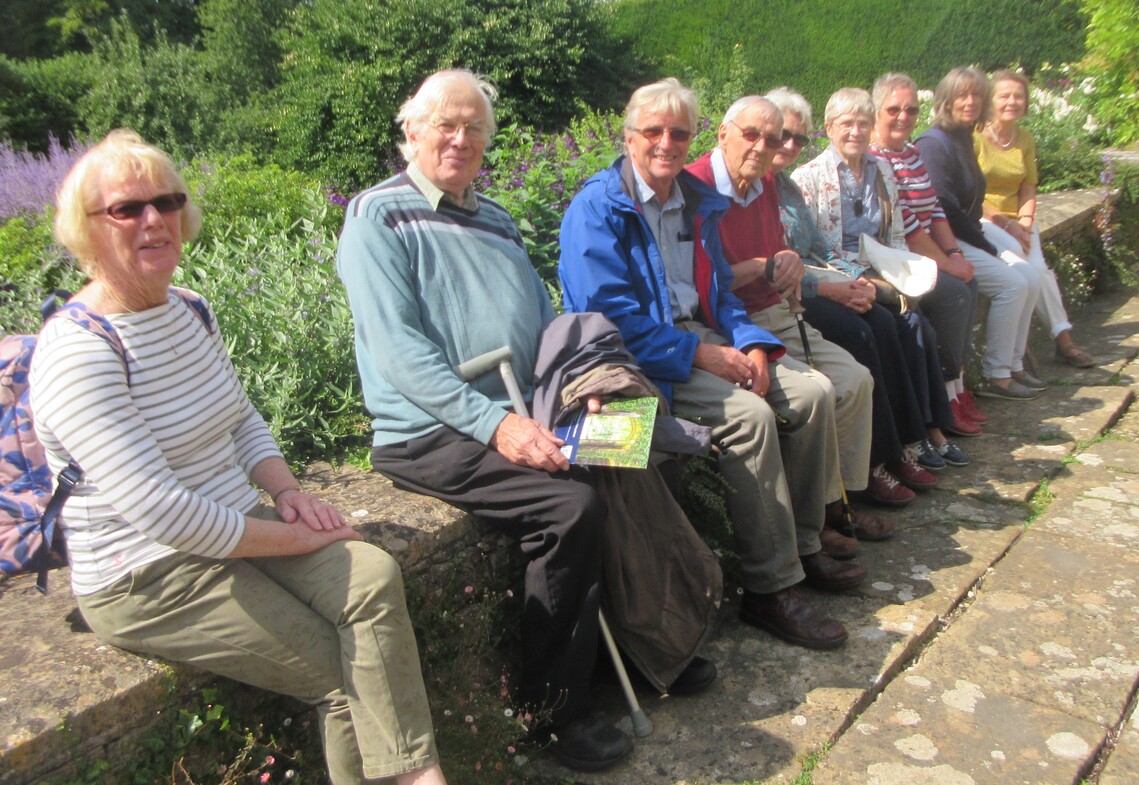 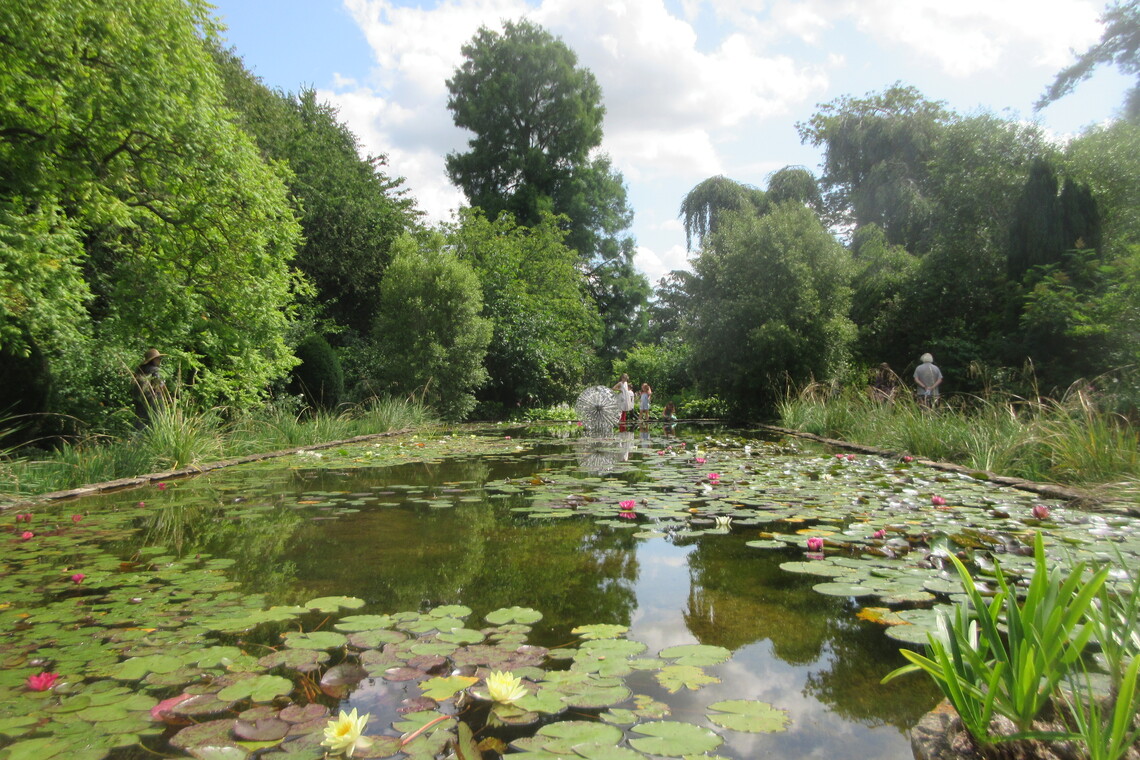 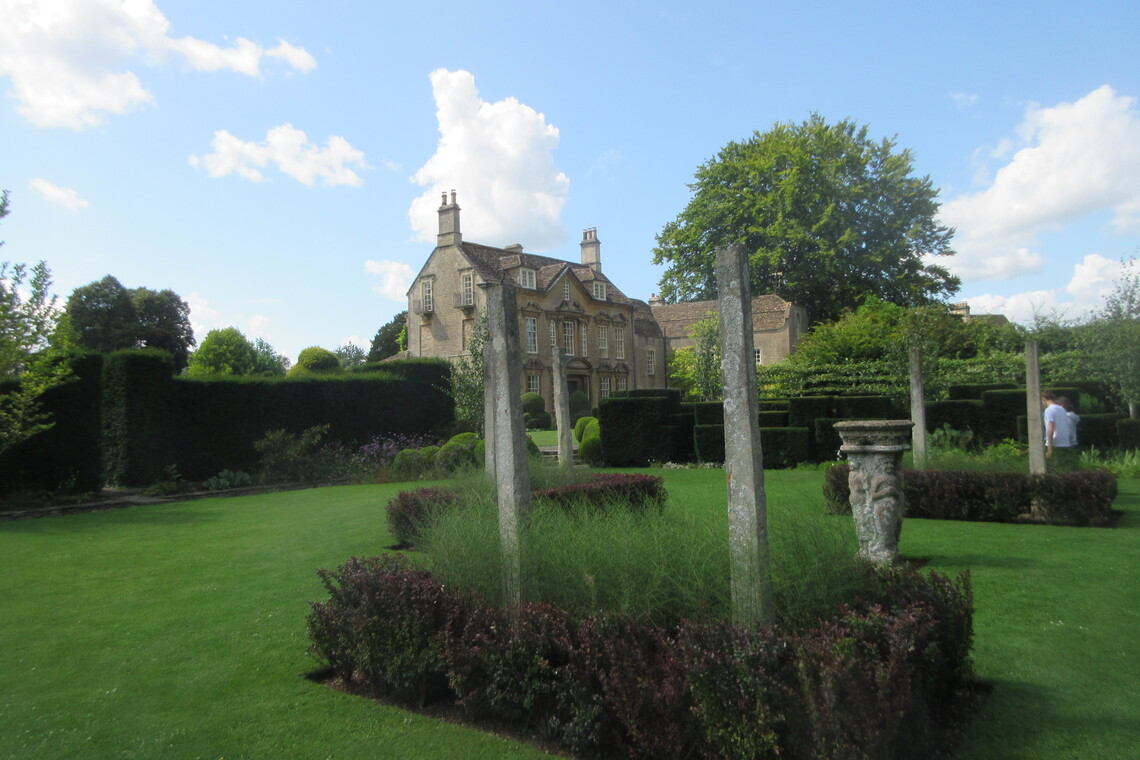 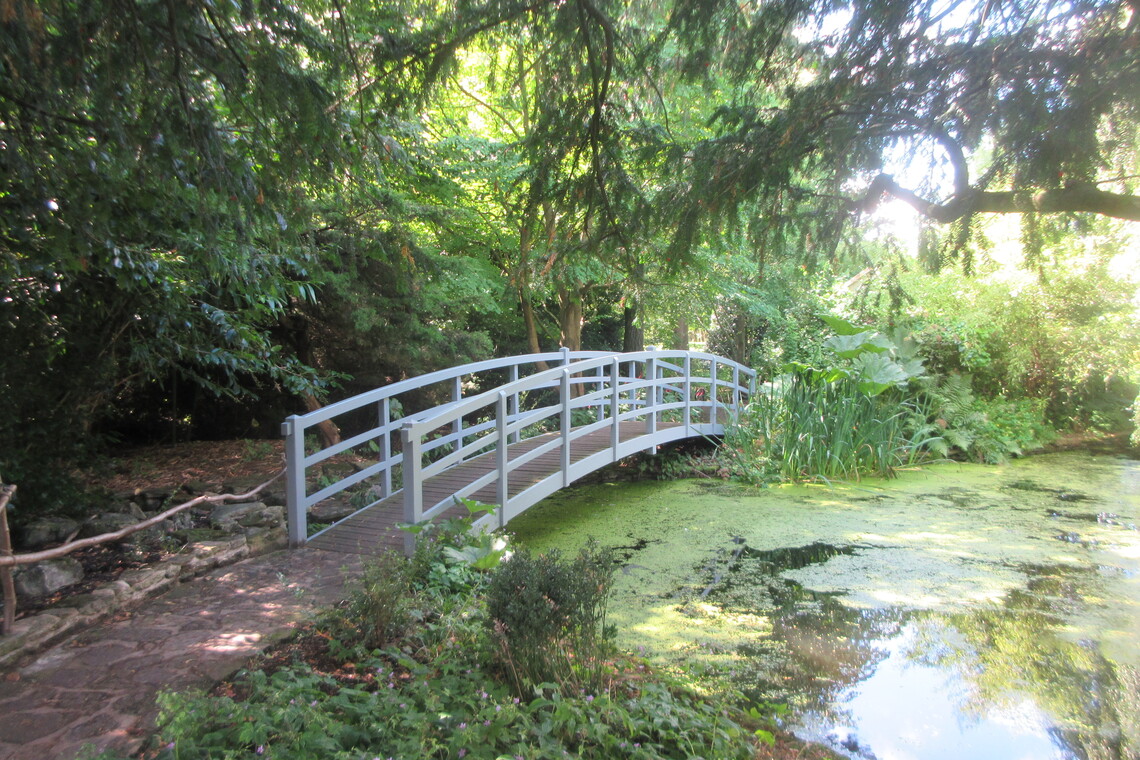 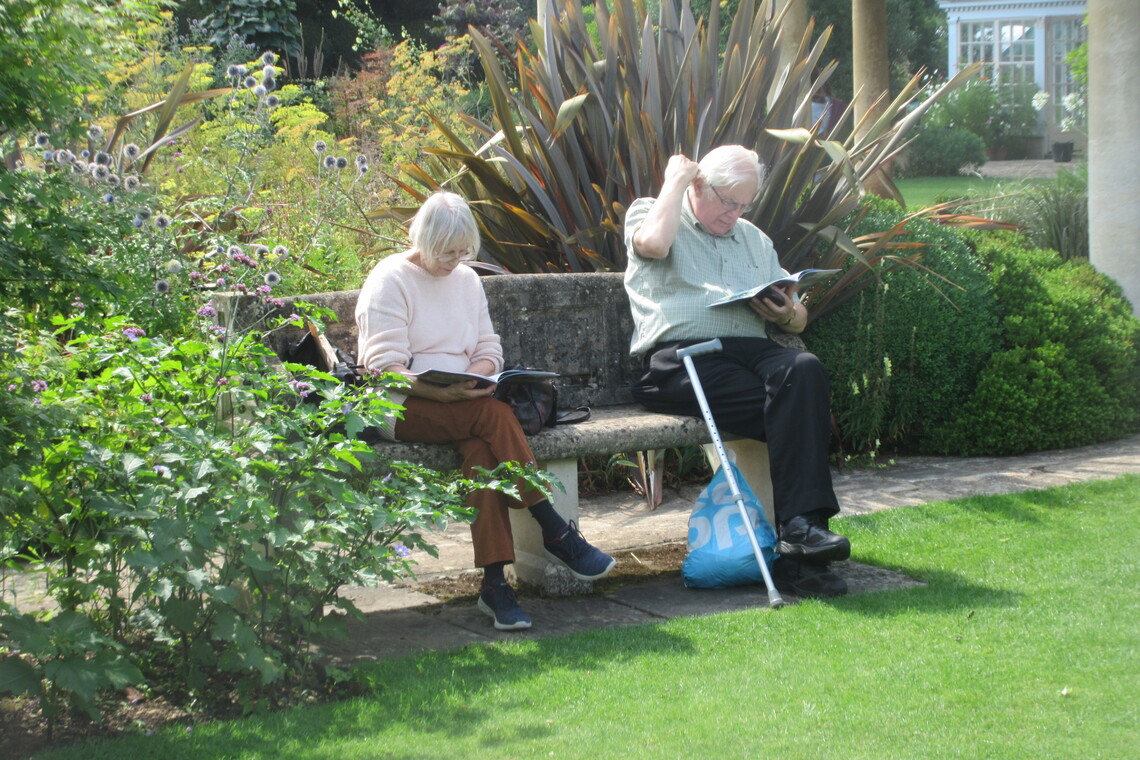