For all of these:   click on "Our Files" tab above 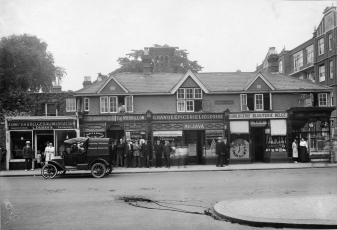 Richmond upon Thames' forgotten story from the First World War.

Richmond upon Thames' unique history.  Our area gave a home to 6000 First World War Belgian Refugees:  they changed the face of our towns and made parts of them Belgian.

Most of the Belgians came here to work in a vast munitions factory  beside the river in East Twickenham near Richmond Bridge.  Its founder, dynamic Franco-Belgian engineer Charles Pelabon, escaped from Antwerp on the very day it fell to the invading German army, and dedicated himself to the war effort. Within only three weeks he was producing shells for the Belgian and Allied armies.

The Pelabon Works started in TEDDINGTON; three months later Charles started up the much larger Pelabon Works in East Twickenham and this eventually superseded the Teddington factory. (The huge Richmond Bridge Estate development now covers the whole of Pelabon's site.)

When the war ended, the Belgians "melted like snow, leaving so little trace", and by 1945 they were completely forgotten. Their story has come to light by sheer chance.

for more about The Belgian Village on the Thames