Celebrating the women who tried to stop World War 1

On the 28th April 1915, 1300 women, who had been organising internationally to get the vote, met together at the Hague to try to find a way forward to peace. They advocated continuous mediation as an alternative to armed struggle. Envoys from the Congress visited 14 Heads of State, the King of Norway, the Pope and the President in their attempt to halt the War.

Winston Churchill called them These Dangerous Women. They were influential in the forming of the League of Nations and formed an organisation - The Women's International League for Peace and Freedom which is still active today, giving women a voice at International level. 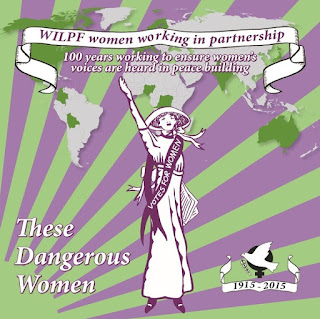 These Dangerous Women is a community project bringing together members of the Women's International League for Peace and Freedom and young volunteers to celebrate and uncover the heritage of the women who tried to stop World War 1. Supported by a grant from the Heritage Lottery Fund, we trained in oral history recording, archive research, exhibition skills, re enactments and documentary making to create an exhibition, documentary and set of oral history recordings.