Summer 2021
After some years of lack of interest and support from humanists and Humanists UK, this group narrowed down its focus and evolved into Humanist Climate Action, run by humanist volunteers with some support from HUK staff. 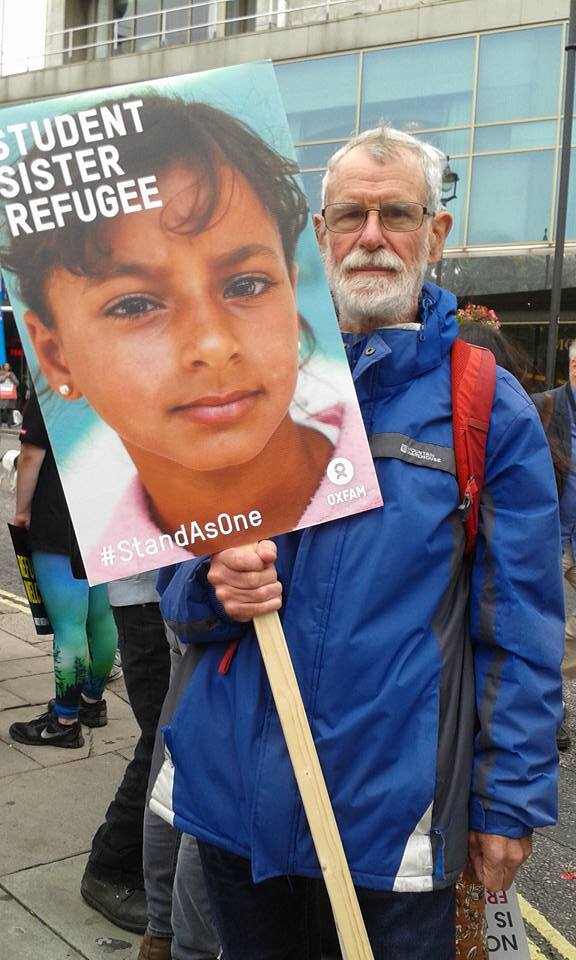 Latest from The Climate Coalition "Show the Love" campaign, 2017 on their Facebook page here and on the TCC website here

Helping refugees
Was your MP one of those who voted to reject a plan for Britain to accept 3,000 unaccompanied Syrian child refugees have ended up in mainland Europe without a parent or guardian (a plan initiated by humanist peer Lord Dubs)? You might like to check the list at http://www.thelondoneconomic.com/news/list-of-mps-who-voted-to-turn-away-3000-unaccompanied-syrian-children/27/04/ and then give them a nudge?

On the right: Richard Norman, patron of the BHA and H4BW at the Refugees Welcome march in September.

Updates from The Climate Coalition
At the November meeting of TCC, we heard the latest from the climate talks in Marrakesh, with concerns about recent  developments in USA but with some reassurance that it will not be as easy or as fast as Trump thinks to pull out of the Paris agreement. There has been some some progress on ratifiying the Paris agreement, but little to report on the big issues of  finance and agriculture.
Climate Outeach offered post-Brexit, post-Trump advice about engaging with people who are not very concerned about climate change, based on their ongoing work attempting to overcome political polarisation on climate change. You can read their blog about their recent work and new book on values, identitiy and communicating about climate change.
TCC’s Speak Up Week of Action in October went well apparently, though S W London Humanists’ invitation to local MPs to join them for a Sunday walk and conversation about local climate change impacts was not taken up by any of them, though at least MPs now know that they have some constituents who care about the issue. Did any other humanist or humanist groups have more success with their MP? If so, do email us so that we can feed back to the TCC.
Show the Love 2017 on Valentine's Day - TCC resources and ideas and asks at http://fortheloveof.org.uk/resources/. . What can you or your local humanist or community group do? What other local groups could you work with (see list of member-groups on TCC website - http://www.theclimatecoalition.org/members)

Other updates from charities supported by BHA and H4BW
Jubilee Debt Campaign - see http://jubileedebt.org.uk/ for news and actions from JDC on international debt as well as and opportunity starting on 29 November and ending on 2 December, to double a donation to the JDC at no extra cost.
See Anti-Slavery - http://www.antislavery.org/english/ - for updates on their campaigns against modern slavery.

Good news from WaterAid
It makes a nice change to have some good news, and WaterAid tells us that “for the first time in history, nine in ten people around the world now have clean, safe water to drink.  Isn’t that incredible? 35 years ago, when WaterAid was founded, this point seemed so far away. While the world can feel like a difficult place sometimes, when we pull together we can do amazing things. Meet Esnart in a WaterAid video: “Esnart lives in a village called Vimphere in Malawi. When my colleague met her, she saw how Esnart woke up every morning at 3am to fetch filthy water from a muddy hole, queuing for hours in the dark as the hole didn’t have enough water to provide for the whole community.”   But there is still much to do and if you are looking for a good cause, you can help reach people like Esnart with clean, safe water: one family, one village, one country at a time.

Other seasonal good causes - if you’d rather make a donation to  a charity than get swept up in a consumerist Christmas, there are lots of good secular causes you can support. You will have your favourites, no doubt, but if you need some ideas the BHA has some at https://humanism.org.uk/humanism/humanism-today/humanists-doing/good-causes-and-charities/

Wishing you a happy 2017 and hoping that it turns out to be a better year for world politics and peace and for the planet that we all depend on. 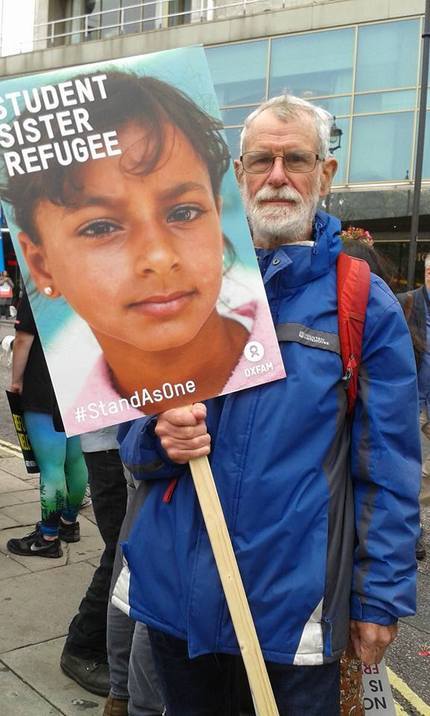 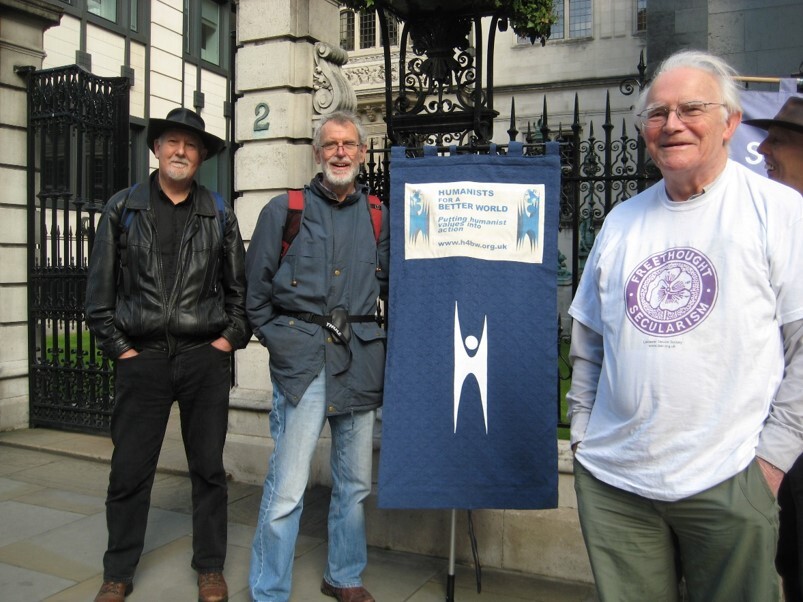 H4BW at a Climate demo in Whitehall 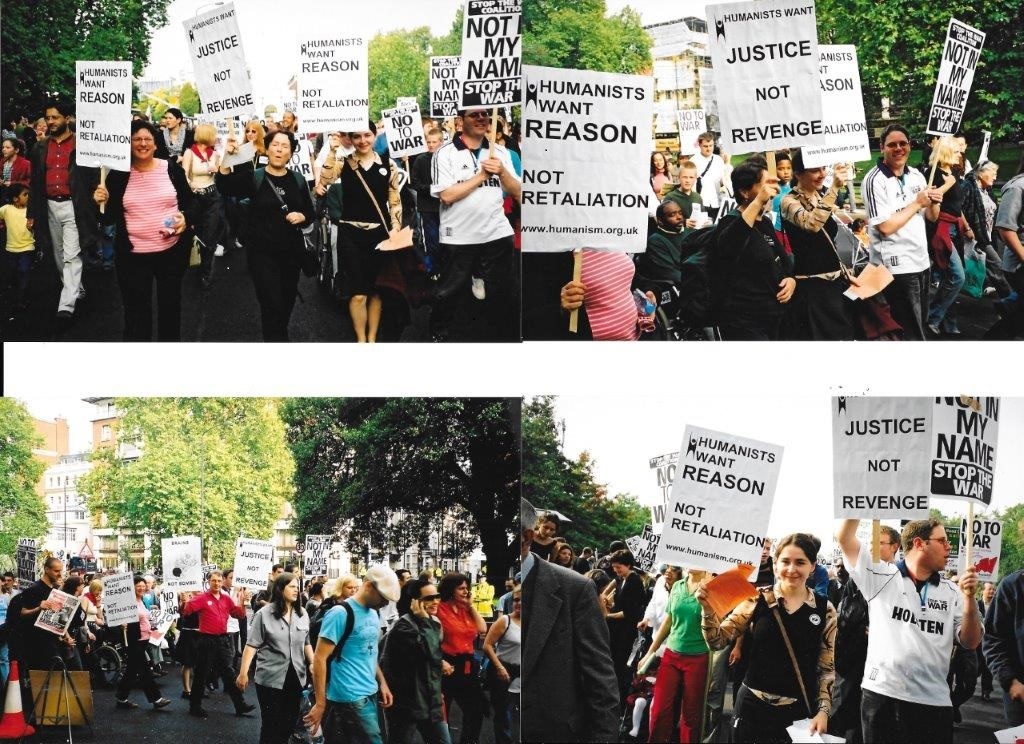