Last week, new statistics showed that food banks in the Trussell Trust network gave out a record 1.6 million food parcels to people in the past year. That's a 73% rise in just five years. Hundreds of #5WeeksTooLong campaigners emailed their MP about the stats and the need to end the five week wait for Universal Credit - if you haven't yet, there's still time! The DWP's response to rising food bank use was disappointing. Especially as they said it was "not true" that people had to wait five weeks because they could get an 'Advance Payment.'  Please watch and share the video on social media and help us get that message out....    https://www.facebook.com/trusselltrust/videos/684879375282939/?utm_source=Trussell+Trust+Campaigning&utm_campaign=8530ac2273-EMAIL_CAMPAIGN_2019_02_06_10_35_COPY_01&utm_medium=email&utm_term=0_a702e2ba99-8530ac2273-430578225&mc_cid=8530ac2273&mc_eid=ea9911cedc

So my colleague Abby has written a blog and made a video that explain really clearly what food banks in our network, as well as the debt, housing and homelessness charities that have joined #5WeeksTooLong already know: advance payments are not the solution.

Leeds Food Aid Network is run by Dave and Mary, who do a fantastic job of bringing together people who work in food banks, soup kitchens, homeless shelters, outreach workers and local authority staff from housing and welfare assistance schemes to share news and network. They have recently collected lots of data and have seen a very worrying 20% increase in the amount of food parcels and meals being provided in the city over the last year. They are seeing a clear link between these increases and issues around Universal Credit. Dave explains a bit more in the video, below. 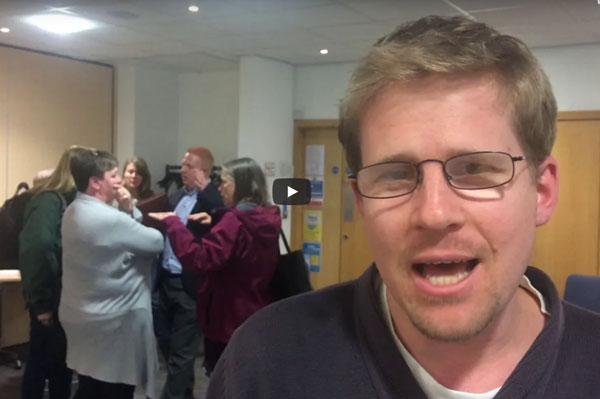 The Government Environmental Audit Select Committee in Jan 2019 found:
“The combination of high living costs, stagnating wages and often, the rollout of Universal Credit and the wider benefits system, means that levels of hunger in Britain are some of the highest across Europe. We found that nearly one in five children under 15 are living in a food insecure home – a scandal which cannot be allowed to continue.“ What are select committees and how do they work? link to House of Commons short film.

MPs have called on departments to adopt targets to end hunger in their single departmental plans as part of action to tackle food insecurity in the UK.

The Environmental Audit Select Committee said the government had failed to recognise and respond to the issues of hunger, malnutrition and obesity in the UK and called for a series of changes across government.

Today’s report found that food insecurity is a significant issue in the UK, with an estimated 19% of under-15s living with an adult who is moderately or severely food insecure. Food insecurity is defined as “limited access to food...  due to lack of money or other resources”, with moderate insecurity defined as compromising quality and variety of food to reducing quantities or skipping meals, with severe insecurity meaning people experience hunger.

The cross-party group of MPs called for the creation of a minister for hunger, who would be accountable for combatting hunger and food insecurity within the UK, as well as the adoption of targets within individual SDPs.

SDPs were first published in 2016 and require departments to set out how they will implement their objectives to deliver services and track performance.

The report highlighted that, for example, the government’s obesity strategy does not mention food insecurity and only the Department for International Development mentions hunger in its single departmental plan.

“To be effective, targets in the SDPs must include UK-wide metrics, for hunger, food insecurity, and malnutrition, and set out specific mechanisms for action if performance is poor,” the committee stated. “Individual targets should make explicit links to departments with responsibility for policies which contribute to the delivery of the primary goal, for example, reducing food waste and monitoring the living wage”.

Committee chair Mary Creagh said that “more children are growing up in homes where parents don’t have enough money to put food on the table”.

She added: “The combination of high living costs, stagnating wages and often, the rollout of Universal Credit and the wider benefits system, means that levels of hunger in Britain are some of the highest across Europe. We found that nearly one in five children under 15 are living in a food insecure home – a scandal which cannot be allowed to continue.”

The committee said this needed to be accompanied by wider moves to embed the UN’s sustainable development goals in departmental plans.

The SDGs are 17 agreed targets for development. As well as a target to eliminate poverty (goal 1) and end hunger (goal 2), objectives include providing good health and education, reducing inequality and improving gender equity, and creating sustainable communities and taking action on climate change.

Unlike the UN’s previous Millennium Development Goals, which focused on poorer nations, the SDGs are universal and are intended to apply to “developed and developing countries alike".

The committee noted that the UK championed such a universal approach during negotiations on the SDGs, but this has not yet led to the government adopting them in its own plans.

As End Hunger UK supporters, Annie has sent us a short film called Fighting Shame, co-produced by some women from Leeds, in which they share stories of poverty through eight everyday objects. Annie met one of the women, Amina, at a conference on Wednesday. She said that the process of making the film was sometimes frustrating in that they had to battle to make sure that their experiences were portrayed in a way they were happy with, but that she is pleased with the finished result.

Trussell Trust: Join the campaign to end the five week wait for Universal Credit. People supported by Universal Credit shouldn’t need a food bank. But from the very start, everyone who applies has to wait at least five weeks for a full payment – some are left waiting longer. This is leaving many people without enough money to cover the basics, forcing them to food banks.  You can find out more about the five week wait on our website.
End Hunger Uk: Everybody should have access to good food. Nobody should have to go to bed hungry. www.endhungeruk.org #endhungeruk. Dear End Hunger UK supporter, we have a new blog written by the fabulous Sinead Furey from Ulster University, who has been doing really useful research on food insecurity for a number of years. She talks about a survey they did to compare different ways of measuring food poverty, and reminds us that there are always human stories behind the statistics. Two 16 year-old food poverty campaigners who we have been working with were interviewed on Channel 4 News. The girls are from Blackburn, and those of you who came to the End Hunger UK conference last year may recognise them.
End Hunger Uk: Hello food poverty campaigners! 18,378! That’s how many people signed the End Hunger UK petition to ask Theresa May to fix Universal Credit! We had a last-minute rush: our colleague Hannah-Mae, who works at The Trussell Trust, arrived at work on the Monday morning before the hand-in to a HUGE pile of envelopes and over 6,000 new signatures! Thank you so much to everyone who signed the petition, got other people to sign the petition or who raised awareness of the petition. Church Action on Poverty.

Independent Food Aid Network. IFAN is a network of independent, grassroots food aid providers working together to ensure food security for all. There are hundreds of food aid providers across the UK that have no national representation and we believe that by bringing them together we can can create a powerful voice for change. Mapping Food Aid.

Local Review of the DWP Operation. Initial investigation of data from the Food Bank identified some very disturbing trends, hence this interim review. This table covers a period in Aug/Sep15.

There are cases of benefit sanctions for minor offences, which we are concerned often hit vulnerable individuals particularly those with mental health problems or communication barriers. JCP clients have referred to bullying and feelings of fear and anxiety.

Read our 'Local Review of the DWP Operation...' following concerns with benefit delays and extreme food poverty and the disturbing number of children involved. Read our letter to Richard Graham MP and his response, all in Members Area.

Between April 2015 and April 2016, Trussell Trust food banks nationally provided more than 1.1m three-day food supplies to people in crisis. More than 415,000 were for children.

Food banks handed out a record number of meals last year after the chaotic introduction of universal credit, the government’s welfare overhaul, left claimants unable to buy food when their benefits were delayed. Source: The Guardian Tuesday 25th April 2017.

Food banks handed out a record number of meals last year after the chaotic introduction of universal credit, the government’s flagship welfare overhaul, left claimants unable to afford meals when their benefits were delayed.

In areas where the full universal credit rollout has taken place, food bank referral rates were running at more than double the national average.

The trust said the standard six-week-plus waiting time for a first benefit payment faced by new universal credit claimants was behind the rise in demand for charity food. As well as reliance on food banks, benefit delays had also led to common adverse effects such as debt, mental illness, rent arrears and eviction, the trust said.

The trust called for an immediate reduction in the minimum six-week wait for a first payment, saying debt and uncertainty caused by being without income was a source of stress and anxiety for many clients, and had led some to lose their homes. 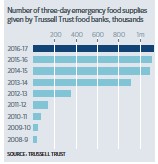 Recipients falling into rent arrears because of payment delays, forcing them to turn to food banks, Guardian investigation reveals Feb 2017. The charity’s new report, Early Warnings: Universal Credit and Foodbanks, highlights that although the rollout of the new Universal Credit system for administering benefits has been piecemeal so far, foodbanks in areas of partial or full rollout are reporting significant problems with its impact.

Total nos of adults and children fed in the year 5,537 clients

Number of Children fed 1,835..... which equates to 35 children a week in crisis with extreme food poverty.