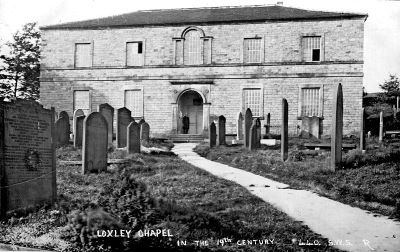 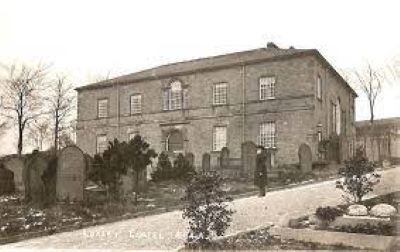 1787: constructed at a cost of £1,000 by some of the worshippers at the Church of St Nicholas, Bradfield. Rev. Benjamin Greaves, an evangelical curate at St Nicholas, was about to be dismissed but he was a popular speaker and his parishioners wanted him to stay in the area, so they raised the money to build the Loxley Congregational Chapel.

The chapel was set back 100 metres from Loxley Road and had the look of a large house constructed from squared gritstone, with Venetian windows. But for some reason it was constructed without an east window and the local bishop refused to consecrate it because of this.

The chapel could hold up to 1000 worshippers; the Rev. Greaves preached there until he moved to preach at Stoney Middleton in Derbyshire.

Rev. Greaves was succeeded by Rev. Flockton (Church of England), appointed by the mortgagee.

1798: was being rented by Protestant Dissenters or Independents. They changed its name to the Loxley Independent Church when they subsequently bought the building, which was sold by auction for £315.

1799: baptisms commenced in the church

1802-1820: Rev. Daniel Dunkerley, from Stockport. He died after a pastorate of eighteen years, and was buried in the cemetery.

1806: earliest recorded burial at Loxley Church, that of Elias Crapper.

1864: victims of the Sheffield Flood were buried in churchyard, among whom were members of the following families - Armitage, Bower, Crownshaw, Denton, Bates, Hudson and Chapman.

1872: Henry Tingle Wilde was christened in the church. He later became the Chief Officer of the Titanic.

?-1913: Rev. John Lee. A plaque was erected on inner wall of chapel in remembrance of the Rev. John Lee, and his wife Eileen.

1985: listed by Historic England as Grade II* and placed on the At Risk register (see the entry for Loxley United Reformed Church).

1993: church closed due to falling numbers attending. Although a listed building, the church was neglected and subject to vandalism.

2016: on 17 August 2016 the church caught fire and was severely damaged by the flames. The fire was attended by three fire engines and was put out within hours, however the building was completely gutted, losing its roof and first floor and all its fitments. It now stands open to the elements.